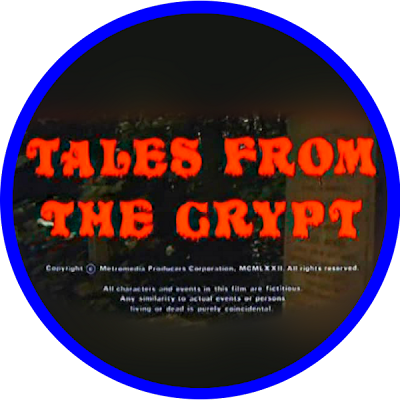 
Tales from the Crypt (1972) - Movie review plus screencaps:
Tales from the Crypt is a horror anthology film, featuring five short subjects inspired by stories from EC comics.  The plot of each story is essentially the same:  evil people do bad things, until the end, when the tables are turned on them and they meet a grisly fate in a "twist" ending.  The "twists" are not really clever twists at all, though.  In one episode, a man is goaded into committing suicide, and the twist is that a year later, the dead man's corpse comes to life and kills the dude.  That's not really a twist, that's just revenge.  In another, a man cheats on his wife, and then falls asleep and dreams he dies in a car accident.   Then he wakes up just in time to REALLY die in a car accident.  And the moral to the story is what, don't cheat on your wife, or you'll get in a car accident?
There are wraparound segments featuring the characters from the shorts encountering "The Cryptkeeper" that tie the stories together.  At first it is presented that the Cryptkeeper is foretelling the characters' futures, but at the end of the film, it is revealed that he is actually reviewing their past, and that they have all died and are damned to Hell.  Which is cool, except that one of the "twist" endings had it's character cursed to live forever, but in constant, excruciating pain, so it doesn't really make sense for him to also be dead and damned.
In the old EC comics that this film is based on, the characters usually met their fate with more poetic justice, in this film, the deaths seem kind of random and tacked-on.  It feels like the script was just dashed off really quickly without a lot of thought put into it.  And the sad thing is, with a little more polish,  if they took the time to make the characters death resonate more with their crimes, and made more of an effort to tie the different stories together,  I think it could have been a really good movie.  As it is, it still has its moments of entertainment value, as long as you don't think about it too much.
Tales from the Crypt is not strictly a Christmas film, but it does have many Christmas elements, including:

Posted by Joshua Raymond at 3:50 AM