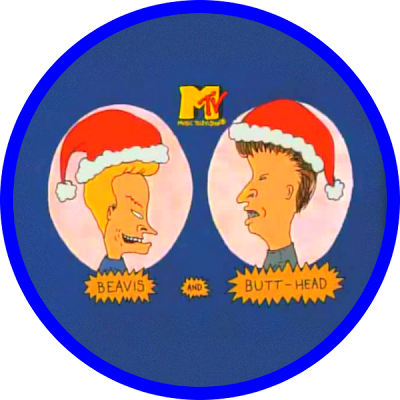 
It's a Miserable Life

The second short is "It's a Miserable Life," a parody of that musty old Jimmy Stewart chestnut, "It's a Wonderful Life."  In It's a Wonderful Life, Jimmy Stewart plays a man who is contemplating suicide.  Then his guardian angel appears, and shows him how much worse the world would be without him, and convinces him to choose life.  In it's a Miserable life, Beavis and Butthead's guardian angel tries to do the opposite.  He tries to convince the boys to kill themselves, because the world would be so much better off without them.  Beavis is willing to do it if the angel pays him (the fact that he won't be able to spend the money when he is dead is a little to complicated for him to grasp), but Butt-Head needs some convincing.  So the guardian angel takes Butt-Head on a tour of an alternate reality where Butt-Head was never born.  It's a clean, happy, unspoiled world... but Butt-Head thinks it "sucks."

In both shorts, Beavis and Butt-Head are shown alternate realities by ghosts or angels, and asked to draw conclusions about them that they can apply to the real world.  In both cases, though, the ghosts and angels fail, because they give far too much credit to Beavis and Butt-Head's abilities to draw any conclusions beyond , "that's cool," or "that sucks."
The episode also has two "Dear Santa Butt-Head" segments, in which Butt-Head, in a Santa Claus costume, reads fan letters, while Beavis stands by in a reindeer costume and is occasionally whipped by Butt-Head.  Butt-Head says, "these are, like, letters from real people and stuff," and I don't know if that's true, but they seem real.  As the segments go on, they focus more and more on women writing love-letters to Beavis, much to Butt-Head's frustration.  Both of these segments are followed by a few music videos from the 1993 Christmas special.
This Christmas special is great, it's much more of a proper Beavis Butthead episode than the 1993 special, with the animated shorts in addition to the videos.  I thought the 1993 special was very funny, but "Beavis and Butt-Head Do Christmas" is a much more satisfying holiday special over all.  I think my ultimate Beavis and Butt-Head Christmas special would have been if they had incorporated ALL of the videos from the 1993 special, instead of just some of them.  In fact, I may just have to edit a copy together for my personal use.  But even without all of the music videos, I still recommend this episode to anyone looking for something funny, weird, and in questionable taste for the holidays.