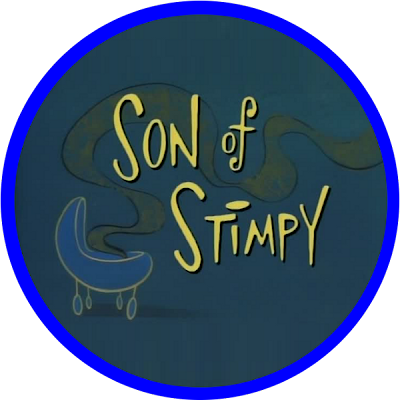 A husband and wife are torn apart after their son runs away from home.  The wife frantically searches through the snow-covered streets for him during the holiday season.  Will the family be reunited in time for Christmas?  It sounds like a holiday tearjerker, doesn't it?  Wait, did I mention that the husband is an angry, violence-prone chihuahua, the wife is an obese, idiot cat, and the lost son is a stinky FART?  This, my friends, is The Ren & Stimpy Show's holiday episode, "Son of Stimpy."
Poor Stimpy doesn't know what to think when something stinky comes out of his butt and makes a noise.  He seeks advice from his husband Ren, but Ren just thinks he's crazy.  Without what he comes to think of as his "son," Stimpy sinks into a long period of despair, and Ren finds himself unable to console him.
Ren tries to cheer him up.  First he finds Stimpy's favorite shows on TV, but Stimpy just mutters, "I don't care."  Later, Ren attempts some cheering up of the sexy variety, as he tries to make-out with Stimpy under the mistletoe, but this just angers Stimpy, who hollers, "is that all you can think about?"
Will Stimpy ever be reunited with his long lost fart?  I won't spoil it for you, but the ending involves a trip through the sewers, big sacks of horse manure, getting run over by a car, a rotting fish corpse. and a close-up inspection of Santa Claus's butt!  In other words, heartwarming fun for the entire family!
Christmas elements of "Son of Stimpy" include: