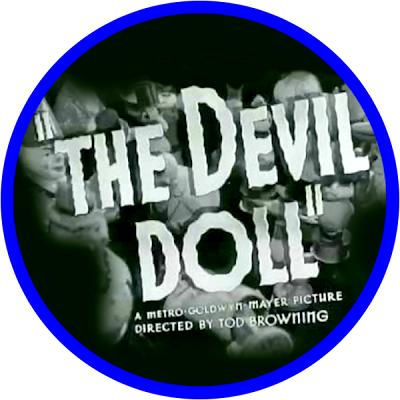 
The Devil Doll (1936) - Movie review plus screencaps:
In "The Devil-Doll," Lionel Barrymore plays an escaped convict who befriends a pair of mad scientists, and uses their methods of shrinking and mind-controlling humans and animals to exact revenge against the men who framed him for murder.
This is a strange little sci-fi flick from the 1930s.  Lionel Barrymore gains the ability to shrink humans and animals to doll-size, and control them with his mind.  So he disguises himself as a toymaker, and smuggles his devil-dolls into his victims homes as Christmas presents and Christmas tree ornaments, to rob and murder the men who framed him.   Oh, and did I mention he disguises himself as a FEMALE toymaker?  Yes, he spends the majority of the film in drag.
The shrinking effects must have been state-of-the-art at the time, and are still a lot of fun.  Watching knife-wielding shrunken people creep around their victims bedrooms in the middle of the night is a real hoot. The film falters a bit when it brings in the subplot of Barrymore's daughter and mother, who have been shamed and made destitute by Barrymore being a criminal, and it tries to tie everything up in a happy ending for them which is pretty lame, but the sort of thing that was expected of movies back then, I guess.
Christmas elements in "The Devil-Doll" include:
Overall, even though the film has it's faults, it's still I fun way to spend an hour and 15 minutes, and it's a must-see if you're a fan of vintage mad scientist movies.  Plus, it makes for great family viewing around the holidays!