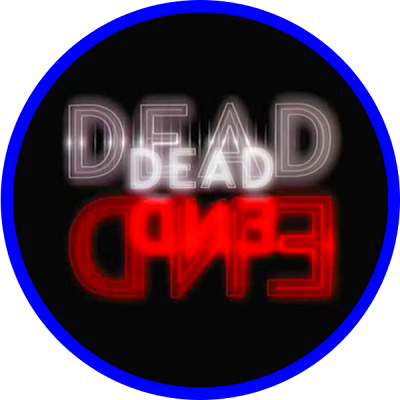 Dead End (2003) - Movie review plus screencaps:
"Over the river and through the woods, to Grandmother's house we go."  It's Christmas Eve, and a family's drive to their in-laws for the holiday makes a wrong turn on to the road to Hell, in 2003's Dead End.
This is a simple, but weird, and effective, horror picture.  On Christmas Eve, a father who is driving his family to their relatives' house decides to take the back road through the woods instead of the interstate, but then the creepiness starts.  The road just goes on and on, with no exit.  Weird, ghostly stuff starts appearing in the woods.  And then the family members start getting killed off, one by one.
The highlight of the film is the performance by Ray Wise.  Ray Wise is best known as Leland Palmer, the father of Laura Palmer from the television series "Twin Peaks."  He brings a similarly intense and slightly over-the-top performance to this film, as he did in Twin Peaks, playing a father who's life starts falling apart before his eyes.  He's really great to watch, and is the main reason I would recommend this film.
The film does a good job of keeping the weirdness and suspense going right until the end, but then it fizzles out a bit with a "twist" ending that tries to explain away everything that happens.  I think if you're gonna make a film weird, you should just commit to it and let it be weird, don't try to explain it all away at the end, it just cheapens the experience.  Admittedly, there is a slight amount of ambiguity to the ending, but it still didn't leave me satisfied.  But, I still enjoyed the movie for the first 99% of it's running time, and I would still recommend it for your family holiday viewing.
Christmas elements in Dead End include: