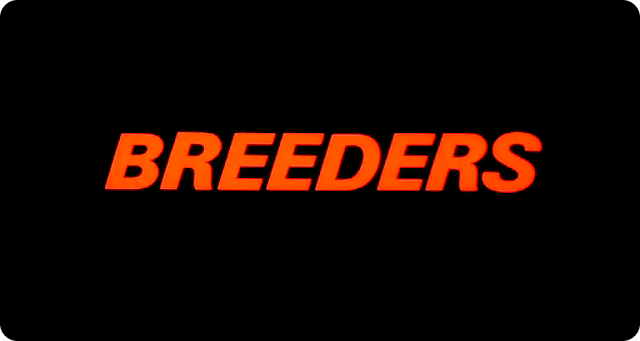 Breeders is cheaply made, sleazy trash.   It features amateurish acting, a monster in a cheesy rubber suit, low quality gore effects, and tons of naked women, in a story about alien parasites that rape virgins.  Sometimes, movies like this can be so bad that they are good.  Other times, they can just be boring, offensive, and no fun to watch.  This one has a bit of both... but mostly, it kind of sucks.

NAKED WOMEN
One thing this movie does have going for it is naked women.  If you like looking at naked women, then this movie's got them, and lots of 'em.  The women in this film are almost all strangely compelled to remove their clothes for no reason.

A nurse, virgin as well, comes home from work, then strips off all of her clothes in the kitchen, while cooking a pot of "Boiled New England Dinner."  This also seemed weird to me, but I'm not really familiar with Boiled New England Dinner.  Maybe it's traditionally cooked in the nude.  I'm not from New England, nor did I go to culinary school, so I guess I'll have it give this one a pass.

A stylist receives a long-distance phone call from her Mom.  She strips off her clothes while talking on the phone, while discussing the fact that she is still a virgin.  Well, I guess our mothers saw us naked all the time when we were babies... so, that's like a totally natural reaction to hearing her voice?  No?  Umm...

Later in the film, women in hospital beds are compelled by alien mind control to strip off their hospital gowns and walk out of the hospital and to a secret lair under the streets of Manhattan.  Strangely, no one notices all these naked women walking around.


SO BAD IT'S GOOD
The acting, writing, and directing on this film are so terrible that I frequently found myself laughing out loud while watching it.  This would have been a great candidate for Mystery Science Theater 3000, if it wasn't for the fact that with all the nudity cut out, it probably wouldn't be long enough.

The film stars Teresa Farley as Dr. Gamble Pace, a doctor who is treating the victims of a series of bizarre rapes.  Miss Farley is very pretty, but she has absolutely no acting skills whatsoever (in fact, her only other credit is for the film "Bad Girls Dormitory," which was released the same year, has the same director, and many of the same actors as Breeders, making me wonder if the films were shot together).  Farley reads all her lines in an expressionless monotone, and shows no emotions until the final shot of the film, where she screams once and then cries, although as it goes on it becomes hard to tell if she is crying or laughing, and I don't think that was intentional.

Her costar is Lance Lewman as Detective Dale Andriotti, the detective investigating the rapes.  Lewman's acting is marginally better than Farley's but not by a lot.  Together they're like the Mulder and Sculley of 1980s New York.  There is a scene towards the end of the film where a victim of the alien parasite's body rips open and a rubber suit alien emerges from inside.  His transformation is increasingly gory and horrible, and the camera repeatedly cuts away to the doctor and the detective to get their reaction shots.  But neither actor is capable of emoting, so instead it just cuts to them with blank, unexpressive looks on their faces, making the scene unintentionally hilarious.

There is another scene in the film, where the doctor and the detective are in an abandoned subway tunnel.  They come up with a plan to activate the third rail of the train tracks, and decide to look for a source of electricity and a cable to connect it to the rail.  The doctor then stands in one place talking about looking for an electrical source, but never leaving the spot she is standing in.  She keeps her feet firmly planted in the same spot, unmoving, and just moves her head around a little to her right.  And then she says, "there it is," and spots an electrical source off camera.  The detective fares marginally better in his search for a cable.  He also never leaves the spot he is standing in, but he allows his body to rotate around 360 degrees in his search.  Luckily, it turns out there is a spool of electrical cable laying on the ground about 7 inches behind his foot.

Equally ridiculous is how they find their way underground in the first place.  While running blood tests on the rape victims, a doctor finds red dust from building bricks inside the women's blood cells.  And not just any brick dust, either, a rare brick that is only found in a handful of underground sights in the city.  Apparently the rapist has been spending time under the city, and getting the dust on him.  Then, when he rapes the women, the dust somehow gets inside their blood cells.  It's scientific.

There is also a minor subplot with a male nurse at the hospital.  I'm going to call him "Billy," but only because I don't feel like rewatching the movie to find out what his name actually was.  Billy likes to hang around in the rooms of the comatose rape victims.  He brings them flowers, touches their faces, and tells them he wants to go on dates with them when they wake up.  So, clearly, this guy is a creep of the highest order.  But, the movie doesn't seem to be aware of this, and treats him like he is a nice, sweet kid.  It kind of boggles the mind.

NOT-SO-SPECIAL EFFECTS
The special effects in the film are very goofy.  The alien monster just looks like a guy in a cheap rubber suit, to the point that it's unbelievable that anyone would look at him and think he's actually an alien.  It works to a certain extent early in the film, when you only see glimpses of the creature.  But when you finally see the alien from head-to-toe towards the end?  Not so much.

There is also a small deformed mutant creature that appears briefly.  From the neck down, it's obviously just a little person dressed in some rags, but the head prosthetic on the guy is cartoonishly fun, with misshaped bug eyes, and a jagged teethed vagina for a mouth.  I actually got a kick out of this guy, and wish he had a more prominent place in the film.

BOTTOM LINE
Ultimately, even as a fan of bad movies, I can't bring myself to recommend this.  It definitely had it's moments, but too much of it was sleazy, or just kind of boring for me to fully endorse.