Jimmy disguised himself as a magician named "Magi the Magnificent" in not one, but three stories, beginning with "Jimmy Olsen's Secret Love" in Superman's Pal Jimmy Olsen #74.

The story begins with the sort of farfetched coincidence that tends to happen every other day in the Jimmy Olsen universe.  Jimmy's stewardess girlfriend, Lucy Lane, is given an assignment by her airline's boss.   She is to go on a flight in disguise, and secretly take photographs of the airline employees, to see who is doing their jobs, and who is goofing off.  Naturally, in order to ride the plane without drawing attention to herself, she disguises herself as Sandra Rogers, a glamorous British movie starlet that no one has ever heard of.  Because that makes perfect sense.

Meanwhile, Jimmy Olsen has received a tip that a wanted jewel thief may be flying on the same plane, and so he books a flight on the plane for himself, in order to try and catch him.  Naturally, in order to ride the plane without drawing attention to himself, he dresses as Magi the Magnificent, a top hat and tuxedo-clad stage magician (that no one has ever heard of), and performs magic tricks during the flight.  Because that makes perfect sense.

The fun begins when Lucy and Jimmy are seated next to each other during the flight.  Neither one recognizes the other, but they both quickly start to fall in love, not realizing that they are cheating on each other with each other.

Then their plane crashes.  And they are shipwrecked on an iceberg.  Superman rescues them, and catches the jewel thief while he's at it.  But in the confusion, neither "Magi" nor "Sandra" thinks to give the other their phone number before they part.  Lucy and Jimmy then go back to dating each other, but both secretly wish they were with their alter-egos, not realizing that they actually are.

Magi the Magnificent and Sandra Rogers returned in issue 78, for a story titled "The Return of Jimmy's Lost Love."  In this issue, Lucy Lane is once again sent undercover by her airline, this time to catch a mail thief.  Once again she dresses up as "Sandra Rogers."  Jimmy, meanwhile, is just hanging out in the airport parking lot, and he spots her walking by.  Jimmy apparently keeps costumes and disguises in the trunk of his car, so he dresses up as Magi once again, and reunites with Sandra.  The two quickly rekindle their romance.  But this time, both of them become overwhelmed with the guilt of cheating on their real partners (not knowing they are their real partners), as well as lying about their identities.  But both think the other would be horrified to learn who they really are, so they don't dare stop lying.  Jimmy even imagines Sandra screaming ,"Oh, no!  No!  No!!" upon learning the truth.  So Jimmy decides to end it by claiming he is going "to Tibet to study ancient forbidden magic," and doesn't know if he will ever see her again.  Smooth, Jimmy.  Smooth.

Finally Magi and Sandra reunite once more in issue 82's "The Wedding of Magi and Sandra."  The story begins with Lucy Lane so distraught about losing Magi that she starts dressing up in her Sandra costume, and just wandering aimlessly around town, heartbroken.  She wanders in to a seedy section of Metropolis and almost gets mugged, but suddenly Magi appears and rescues her. 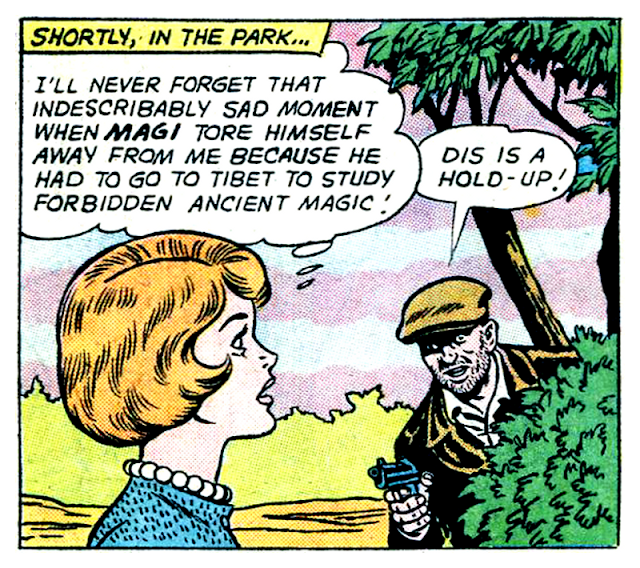 It seems Jimmy spotted "Sandra" wandering around, and switched in to his Magi costume and returned to her side in the nick of time.  The two then spend the night on the town together, and fall deeper in love then ever.  "Magi" then hints that he will propose marriage to Sandra the next night. 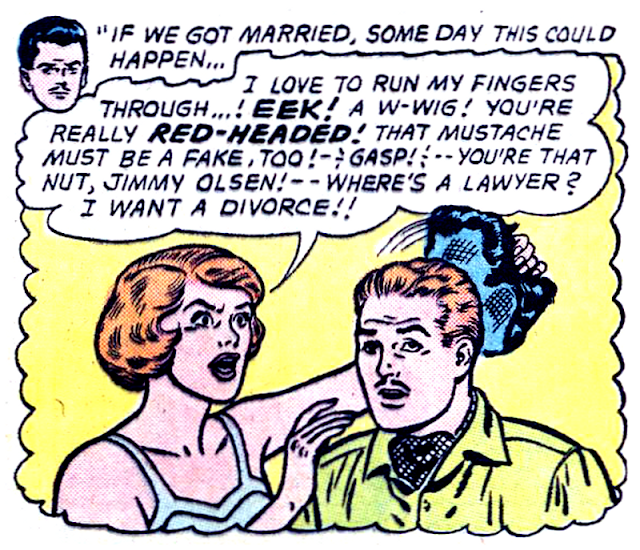 However, the next day, Jimmy starts to imagine how upset Sandra would be if she found out he was really Jimmy Olsen, and gets cold feet.  So he does the only sensible thing he could do in that situation.

Now both Jimmy and Lucy are heartbroken, longing after their nonexistent lovers.  So they decide to "settle" for each other.  You know, like that old classic rock song, "if you can't be with the one you love, love the one you're with?"  So Jimmy and Lucy elope.  But even as they say their "I Do's" they are choking back tears, because all they can think about is Magi and Sandra.  Also, I should point out that "this is not a hoax, or a dream, or an imaginary story."  Lucy and Jimmy really get married in this comic.

After the ceremony, Jimmy and Lucy finally discover each other's secrets.  They are briefly angry with each other, but they quickly become overjoyed, as they realize they married the right people after all.  Then, just as the happy couple are about to leave on their honeymoon, the justice of the peace who performed their ceremony comes running up, screaming, "Thank goodness I caught you in time!  You aren't married!"

In the past, I have said that Lucy is a terrible boyfriend for Jimmy, because she is fickle, goes out with other guys, and never treats Jimmy with any respect.  But now I see that they are actually perfect for each other.  Because they are both fucking insane.

BONUS! It may not be MAGI the Magnificent, but it's still pretty cool...

The Three Ghouls - Morgus the Magnificent