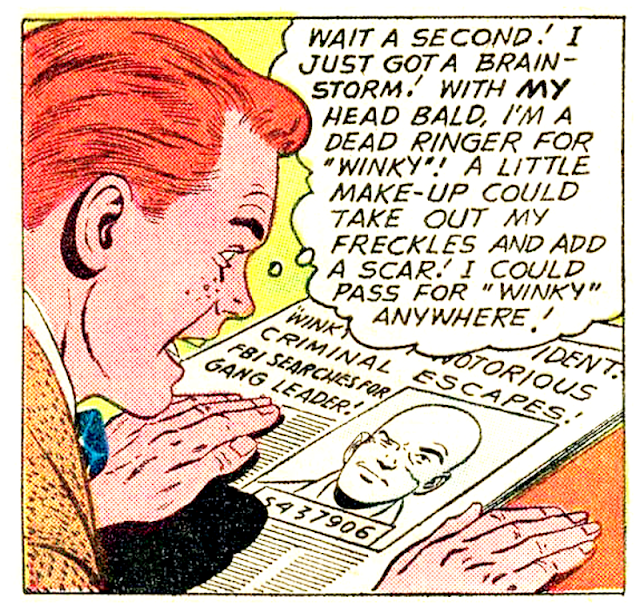 In "The King of Crime," from Superman's Pal Jimmy Olsen #46, Jimmy is reading the newspaper when he learns of the escape of "Winky McCoy" a convicted felon known as "the King of Crime."  In an insane coincidence that only makes sense in the Jimmy Olsen universe, Winky looks almost exactly like Jimmy Olsen, except he is bald, has a scar, and has no freckles.  He also has a nervous twitch in one of his eyes when he gets excited, which is why people call him "Winky."  So Jimmy decides to go undercover as Winky, to learn where all of his secret hide-outs are, and who all the members of his gang are, so he can then tip off the police.

Jimmy shaves his head, covers up his freckles, and puts on a fake scar, then dresses up in a convicts uniform.  He then starts hanging around the alleys of Winky's old neighborhood in Metropolis, and is quickly picked up by Winky's gang.  Jimmy's plan worked.
Winky's gang only consists of 5 or 6 guys, and it's not even remotely clear why Winky is considered to be the "King of Crime."  But they do have one thing... a gigantic, drum shaped chunk of kryptonite.  In the comics, even small pieces of kryptonite weaken Superman, so I'm pretty sure this giant one would straight up kill him.  The gang are planning on putting the kryptonite inside a marching band's drum, and then have the band play near Superman.  When Superman is killed, they are then going commit a "fur robbery."  A fur robbery.  Way to think big, guys.

But Jimmy, as "Winky," says he wants to put the kryptonite in the drum himself, since "I'm the best mechanic in the gang."  Because apparently, you have to be a good mechanic to unscrew a drum, put something inside it, and put it back together again.  When alone with the drum, he then coats the interior of the drum, including the drum skin, with lead, which blocks the kryptonite rays, and saves Superman's life.  No furs will be stolen today!
But Jimmy's victory was short-lived.  You see, Jimmy never bothered to tell Superman he was going undercover.  When the story began, Superman was on an "outer space mission."  Superman was constantly going away on outer space missions in these old Jimmy Olsen comics.  It makes me wonder if he really was in outer space, or if he just told Jimmy that so he could have some peace and quiet away from the shenanigans of his "pal."  Obviously Superman was back on Earth in time for the "kryptonite drum" incident, but Jimmy still never bothered to fill him in.  So as Jimmy and the gang members are sitting around the gang headquarters watching TV, a news report comes on, saying that Superman has just captured the real Winky trying to sneak back in to Metropolis!

The jig is up, and Jimmy is about to get shot dead by the angry criminals!  Luckily, the FBI bursts in and saves the day at the nick of time.  It turns out that earlier, Jimmy had used Winky's nervous eye twitch to wink at an FBI agent in Morse code.  Jimmy knew that someday his habit of winking at handsome men would pay off, but never like this!  Good job, Jimmy.

Posted by Joshua Raymond at 4:29 PM