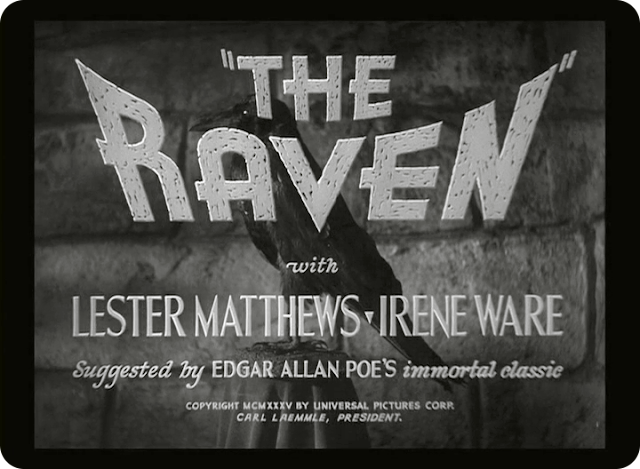 "The Raven" is one of several works of Edgar Allan Poe that are referenced in the 1935 film of the same name.  It's not actually an adaptation of Poe's classic poem, but I guess calling the film "Bela Lugosi plays a weirdo doctor who is obsessed with Edgar Allan Poe" wouldn't have the same ring to it.

In the film Lugosi plays Dr. Richard Vollin, a highly gifted, but creepy doctor who is, you guessed it, obsessed with Edgar Allan Poe.  Dr. Vollin was a genius surgeon, but he is now retired, and spends his time recreating torture devices from Poe stories in his basement dungeon.  However, he doesn't actually torture people in them.  It's really just a hobby for him.  He's not crazy in the beginning of the film, he's just a weirdo.

Dr. Vollin is coerced out of retirement by a local judge, when his daughter is comatized in an automobile accident.  After saving the woman's life, Vollin falls in love with her.  But the girl is not interested in him like that, and is engaged to be married to another man.  When the judge notices Lugosi's interest, he tells him to stay away from her, basically because he is too old, and and a creepy weirdo to boot.  And then Bela's character goes insane.


The main flaw with this film is that Lugosi's character just sort of becomes insane.  There should have been a sense of increased longing and pressure on his part, before he finally has had all he can take and snaps.  But there isn't.  Instead, he's just a crazy guy who got crazier.  Mad Love, another horror film from the same year, starring Peter Lorre, had a very similar story about an eccentric doctor who falls in love, is rejected, and slowly goes insane.  That film really did it right.  Of course, it benefited by having a great actor like Lorre in the lead.  He could really sell the insanity.  Bela Lugosi simply doesn't have the same acting skills, and just hams everything up.  To be fair though, in his best roles that worked well for him.

Boris Karloff received top billing, but he's really more of a supporting character, and he doesn't appear until about a third of the way in to the film.  He's basically an "Igor" to Lugosi's mad scientist.  Karloff makes the most of his screen time, though, and delivers a much more believable performance than Lugosi.

I don't think I'll be spoiling anything by saying that Lugosi's torture chambers play a big role in the finale of the film.  Overall, this was not on the same level of quality as the Vincent Price Poe films that would later be made in the 1960s, but it was still a good example of vintage movie horror.