So, Jimmy Olsen, You Wanna Be a Rock 'N' Roll Star? 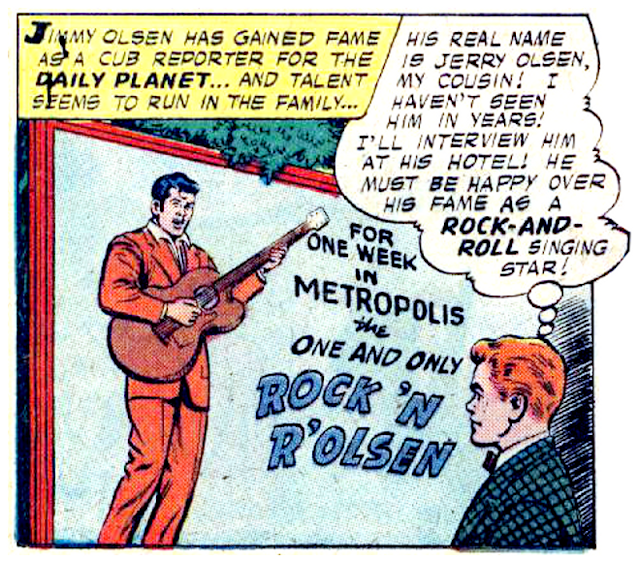 In "The Rock 'N' Roll Superman," from Superman's Pal Jimmy Olsen #32, Jimmy disguises himself as "Rock'N R'Olsen," aka his cousin, Jerry Olsen.  His cousin Jerry is a rock star that seems to be modeled on Chuck Berry, with a dash of Elvis and Jerry Lee Lewis thrown in for good measure.  Jimmy steps in for him when Jerry get the measles and can't perform.  Luckily, Jerry is one of those Patty Duke style "identical cousins" whose only difference is his hair.  So Jimmy dons a wig, a fake mustache, and a flashy suit, and he's good to go.

In this comic, Jimmy just pretends to play the guitar, and lip-synch the vocals, to a tape hidden in his guitar.  In the wacky twist, the tape recorder somehow interacts with Jimmy's Superman Signal Watch, and beams signals into Superman's brain forcing him to rock 'n roll dance wherever he is.  This gets Superman into a bunch of trouble with some stuffy old ladies who think he is uncouth. 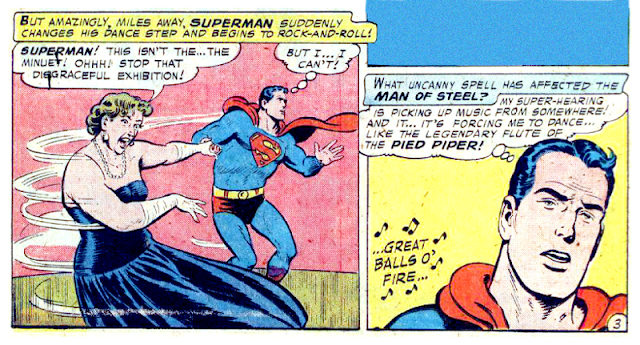 I wrote a more in depth article about this story a few years ago.  Click here to check it out. 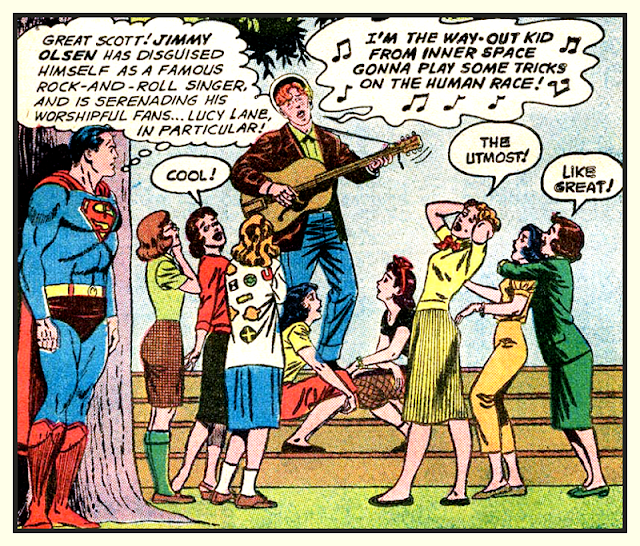 Superman's Pal Jimmy Olsen #49 features the story "Alias, Chip O'Doole."  In it, Jimmy is jealous of Chip O'Doole, who is billed as "America's Greatest Rock and Roll Singer."
Lucy is blowing Jimmy off to stay at home and listen to Chip O'Doole records, so Jimmy decides to disguise himself as the singer, then act like a jerk to Lucy.  This way, Lucy will hate O'Doole, and start spending more time with Jimmy again.  Luckily for Jimmy, Chip O'Doole looks identical to Jimmy, except for a pair of sideburns.   It's kind of amazing how many people in the Jimmy Olsen universe, look exactly like him, except for a small difference like a mustache, scar, or sideburns.  Was Jimmy part of some cloning project that went wrong, or something?  Or maybe, Jimmy is the ultimate human being, and all of humanity is evolving in that direction.  In a 1000 years, maybe everybody will look like Jimmy! 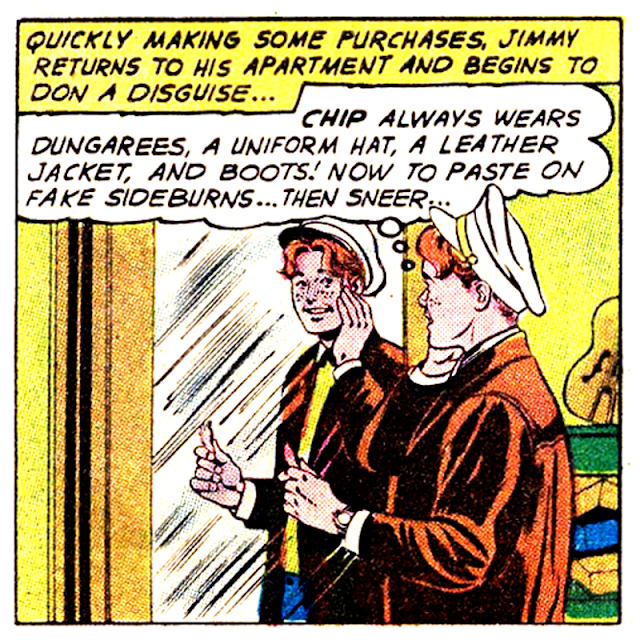 After Jimmy's previous lip-synching disaster, that forced Superman to dance whenever Jimmy performed,  Jimmy plays it safe by singing an playing the guitar himself in this one.  He doesn't however, take the time to learn any of Chip O'Doole's songs, and instead he just makes some random crap up whenever he needs to sing.

It's kind of like Jerry Siegel, the writer of the comic, was like, "It's just a bunch of noise anyway, the kids won't be able to tell the difference!"

In issue 79's "The Red-Headed Beatle of 1000 B.C.," Jimmy gets stranded in the year 1000 B.C. by an evil time-traveler.  Luckily for Jimmy, he has his "Beatle Wig" in his pocket.  So, naturally, he decides to start a Beatles craze in the year 1000 B.C.  He does this by wearing the wig while banging on a drum, blowing into a ram's horn, and shouting "yeah yeah yeah!"

Soon Jimmy is surrounded by throngs of Beatle wig wearing, Iron Age teenagers, dancing to his "music"  This upsets the evil time-traveler, who has been lurking in the background, so he arranges to have Jimmy thrown in a dungeon for stealing scraps of wool.

Eventually, Superman shows up and smashes some stuff and sets everything right.  He takes Jimmy back to the present, but allows him to perform a 1000 B.C. farewell concert before he goes home.  While watching Jimmy perform, Superman tells him that he is "more popular than Ringo."
ROCK STAR#4
BIZARRO JIMMY, ROCK-'N'-ROLL STAR 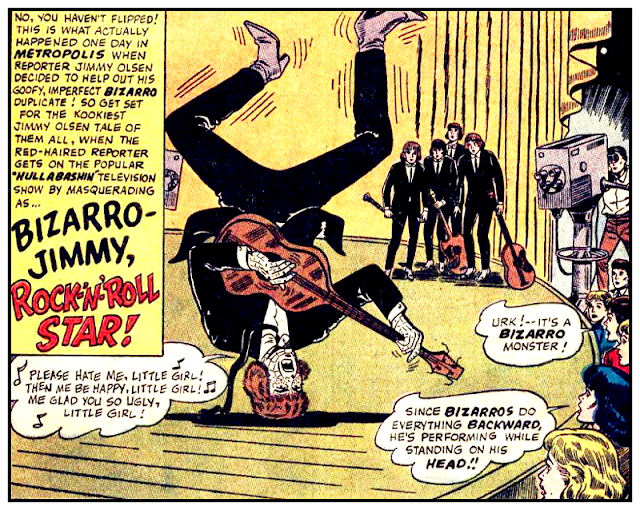 In "Bizarro Jimmy, Rock-'N'-Roll Star," from issue 87, Bizarro Jimmy #1 shows up at Jimmy Olsen's apartment, and kicks in the screen of his TV.  Since he is a Bizarro, this is meant as a friendly gesture. 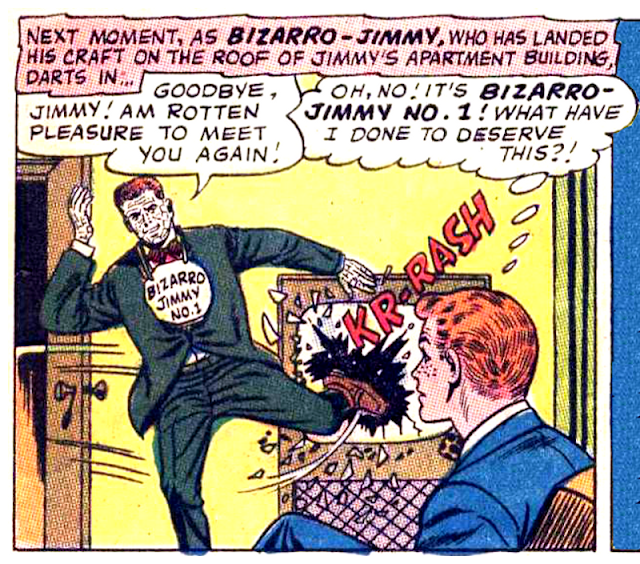 It seems that Bizarro Jimmy has come to Earth in search of a scoop for his newspaper, The Daily Htrae.  Jimmy agrees to disguise himself as a rock singer version of Bizarro Jimmy, and perform on a local TV music show.  The plan is for Jimmy-disguised-as-Bizarro Jimmy's act to be a disaster, which for a Bizarro, would be a good thing.  The real Bizarro Jimmy could then go back to the Bizarro World and report on "his" failure to be a rock star.  So Jimmy goes on TV, and performs an insane show that has him singing while standing on his head, threatening the crowd, releasing a swarm of live flies, and singing songs about ugly girls. 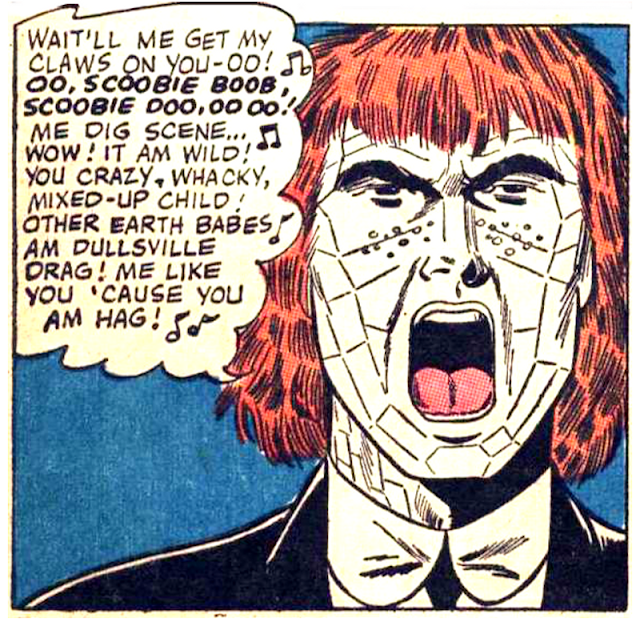 And the local kids go nuts for it.
Jimmy ends up starting a "Bizarro Beat" nationwide rock craze.  Poor Bizarro Jimmy has to return to the Bizarro World in shame, and is "punished" for his failure to fail, by being promoted to editor of his newspaper, and given a raise.

BONUS!  Music Video:
The Byrds - So You Want to be a Rock 'n' Roll Star


DOUBLE BONUS!  I just stumbled on this video from "The Detergents," who were mentioned in the Bizarro Jimmy comic above, and it's perfect for Halloween!  Thanks to "thedeadfraggle" for uploading this as part of the 2011 Countdown to Halloween.
The Detergents - Igor's Cellar

Posted by Joshua Raymond at 1:38 PM