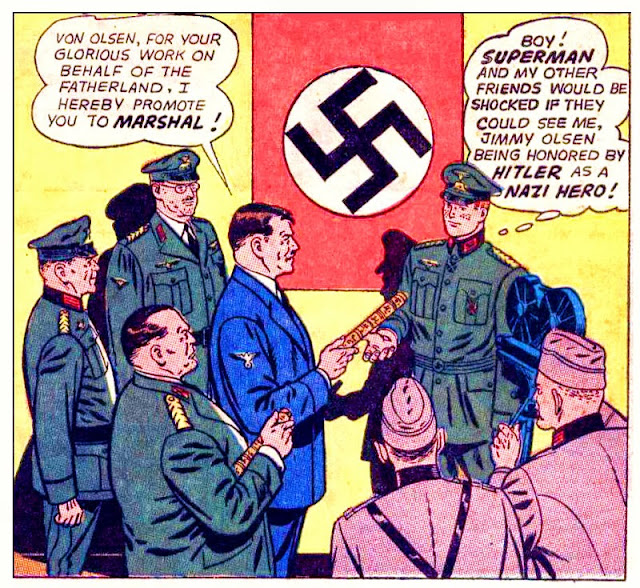 "Jimmy's D-Day Adventure," a story from Superman's Pal Jimmy Olsen #86, begins with Jimmy watching some old World War 2 newsreel footage when he is shocked to see film of someone who looks just like himself receiving an award from none other than Adolf Hitler!

Naturally, this piques Jimmy's curiosity.  So he grabs his time travel crystal ball (he keeps it on a shelf in his apartment, next to his globe), and travels back in time to D-Day, to find out who his Nazi look-a-like is.

Jimmy arrives in the past and puts together a fake Nazi uniform out of junk he finds discarded on the battlefield.  Then, using his cobbled together costume and the limited amount of German he learned in high school, Jimmy infiltrates the Nazis!  Now he'll be able to figure out who his look-a-like is and solve the mystery. 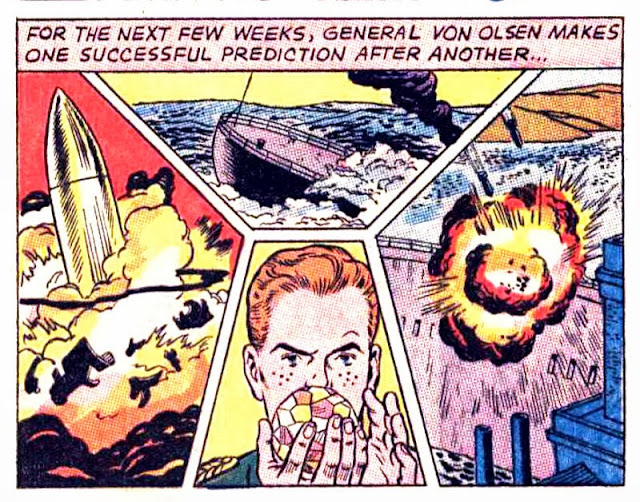 In the weeks that follow, Jimmy uses his knowledge of WW2 history to pretend to be able to predict the future, and quickly rises through the ranks of the Nazis.  Eventually he becomes Hitler's chief military adviser.  While getting photographed receiving a medal from Hitler, Jimmy realizes that he does not have a look-a-like... HE'S the Nazi War Hero!  It's an "ironic" twist!  Congratulations, Jimmy!
Posted by Joshua Raymond at 12:00 PM