Jimmy Olsen is a Sweet Transvestite in the Final Installment of Jimmy Olsen's Greatest Costumes and Disguises! 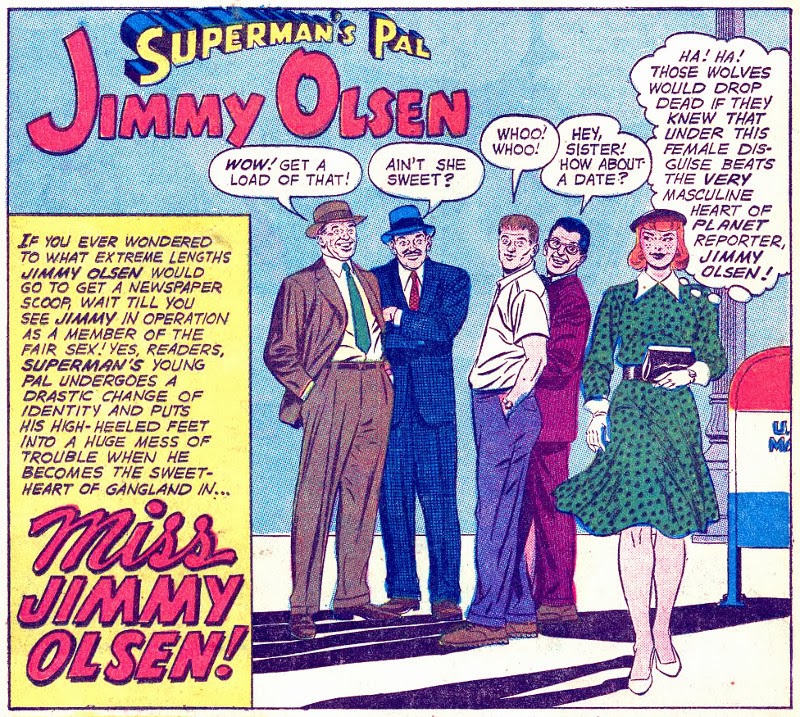 When counting down Jimmy's greatest costumes and disguises, one costume is clearly Jimmy's favorite, as he dresses in it more often than any of his other disguises.  That would be Jimmy Olsen dressing himself in women's clothes.  There are some interesting things going down in Jimmy's transvestite stories.  For one, men seem to be irresistibly attracted to Jimmy when he is dressed as a woman.  He is constantly meet with wolf-whistles and lewd comments on the street, and men fall in love with him right and left.  And while Jimmy's thought balloons make him out to be a reluctant woman, the looks on his face tell a different story.  Just look at the sly smile on Jimmy's face, in the comic panel above, and tell me Jimmy isn't in to it.

I'm going to be counting down the five cross-dressing stories I've found from the pages of Superman's Pal, Jimmy Olsen comics.  I'm ranking them based on how interesting they are psychologically.

In "They Day They Unmasked Mr. Action," Jimmy has been falsely accused of a crime, and is on the run from the police.  He makes a quick trip to the second-hand store, where he buys women's clothing, a wig, and make-up.  Then he changes into these clothes in an alley.

This story is probably the least interesting psychologically, because it's clear Jimmy is doing this to escape from the police, and he doesn't seem to be taking that much pleasure in it.  But it does have a scene where Jimmy walks down the street and is met with lust from the men hanging around on the corner.  In the story Jimmy's "man-hands" quickly give him away to the police, but it's okay, because it turns out to all be a ruse by the police to catch another criminal. 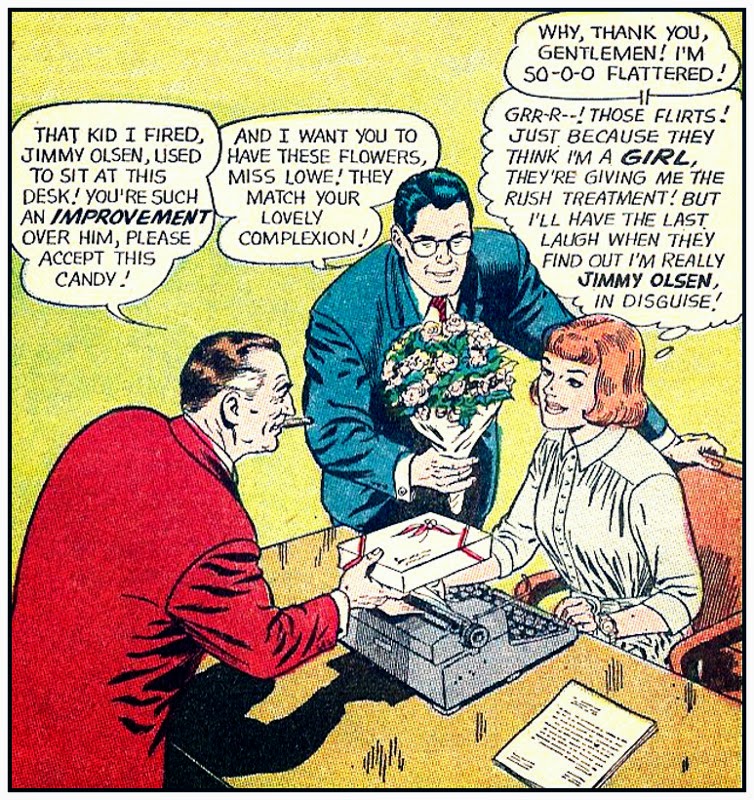 In "Leslie Lowe, Girl Reporter," Jimmy is feeling emasculated after finding out that his girlfriend, Lucy Lane, makes more than twice as much money as he does.  So he demands a raise from his boss, Perry White, and, failing to get it, quits his job.  However, he finds himself unable to get a job anywhere else.  Rather than humiliate himself further by going to Perry White and asking for his old job back, he decides to dress up in women's clothing and apply for his old job under the guise of "Leslie Lowe."

Jimmy's plan is to do the job as bad as possibly as Leslie, so that in the end Perry White will get fed up with her(him) and gladly give Jimmy his old job back.

But Jimmy's fan backfires, because every time he tries to do something wrong, he ends up doing it perfectly instead, making the male Jimmy Olsen look like a chump by comparison.  In the end, though, it turns out that Clark Kent, Lois Lane, and Perry White knew that Leslie was really Jimmy all along, because he forgot to take off his Superman signal watch.  Then they all have a good laugh about it, and Jimmy is hired back at the Daily Planet.

"Jimmy Olsen's Secret Love" is the first of the "Magi the Magnificent" stories I wrote about in a previous installment of Jimmy Olsen's Greatest Costumes and Disguises.  In this story, Jimmy, while disguised as a magician named "Magi the Magnificent," falls in love with a British movie star named "Sandra Rogers," not realizing that Sandra is actually his real-life girlfriend, Lucy Lane, who is also in disguise.  Jimmy only cross-dresses for a few panels in this story, but they are interesting ones to think about.  In the story, Magi and Sandra are forced to part ways briefly, to keep their dates they have in real-life with Lucy and Jimmy (in other words, each other).  The date in question is at a masquerade party, so Jimmy, who has fallen deeply in love with Sandra, decides to dress up as Sandra.

Psychologically, it asks some interesting questions.  Has Jimmy fallen so hard for Sandra that he literally wants to become her?  Or, was the fact that Sandra is a pretty red-headed girl, that resembles what Jimmy looks like when he wears women's clothes, what attracted him to her in the first place?  Does he see her as a reflection of himself?  Interesting stuff.

TRANSVESTITE #2
JIMMY OLSEN'S FEMALE FAN
from SUPERMAN'S PAL JIMMY OLSEN #84
In Greek mythology, Narcissus was a man who fell in love with his reflection   In "Jimmy Olsen's Female Fan" Jimmy seems to be falling under the same spell, as he disguises himself as a girl, then joins his own fan club. Joining your own fan club is already an interesting bit of narcissism, but Jimmy then takes it to the next level, by appointing his female alter-ego as the leader of the club, and then forcing all the other boys in the club to dye their hair red and paint freckles on their faces, so that they will look like him.  Jimmy Olsen, dressed as a girl, surrounding himself with young boys, dressed as Jimmy Olsen.  This is some fascinating stuff, especially considering these comics were written for children.

"Miss Jimmy Olsen" was Jimmy's first cross-dressing story, and possibly his best.  In this comic, Jimmy goes undercover as a chorus girl, in order to keep tabs on a gangster, "Big Monte" McGraw, and his chorus girl girlfriend, and figure out here they stashed a set of stolen jewels.  Not only is Big Monte fooled by Jimmy's female impersonation, but he quickly falls in love with her(him), and showers her with presents and affection. 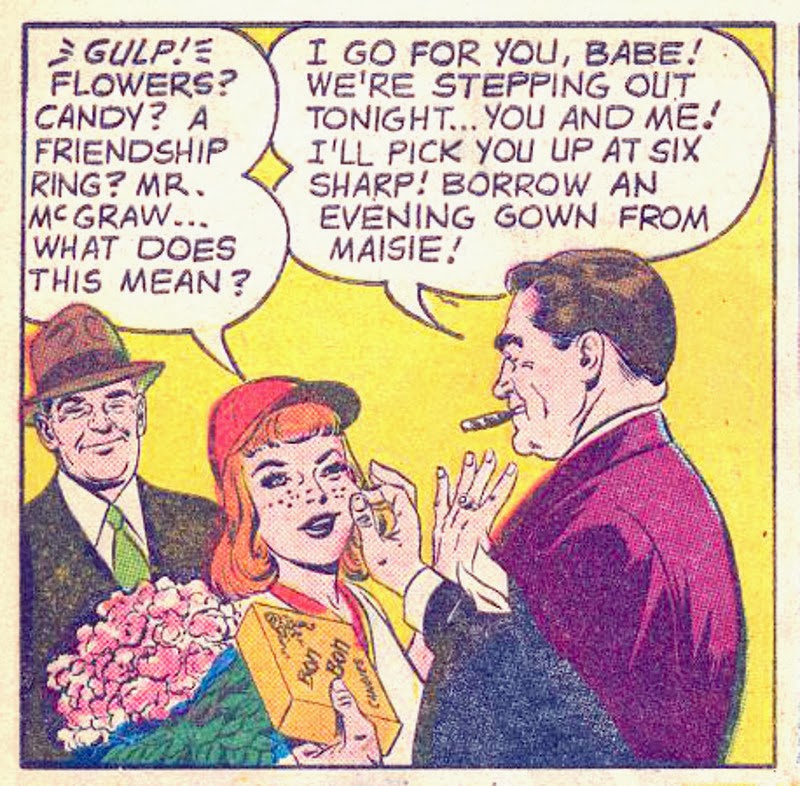 Monte is also violently jealous of any other men who have eyes for Jimmy.  He has one man beaten for flirting with Jimmy, and has a fellow gangster who sent Jimmy a love note shot to death.  In one of the weirder parts of this comic, Jimmy doesn't even bat an eye during this murder, thinking that the man was wanted dead-or-alive by the FBI, and that "the law was spared the expense of executing him." 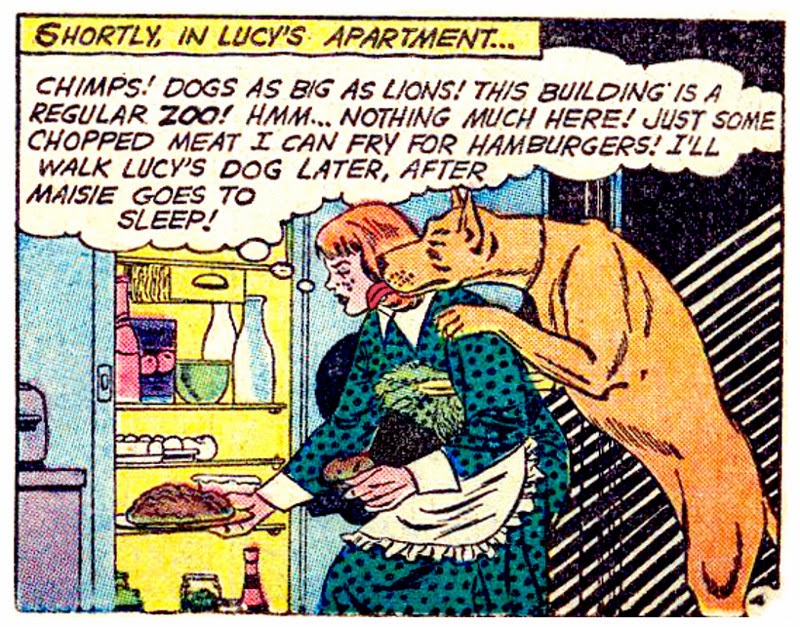 In addition to the transvestism, there are also hints of bestiality in this comic.  Now don't get me wrong, I'm not saying the two things are comparable.  Bestiality is f---ed up.  Cross-dressing is just a lifestyle choice, there's nothing wrong with it.  But this comic was written in 1960, when both of those thing were considered to be sexual perversions.  There is a subplot in this comic where Jimmy has to take care of both a chimpanzee, and a large Great Dane.  There is an odd panel in the comic where the Great Dane is standing upright, propped up on Jimmy's back, and licking his face (while Jimmy is dressed in women's clothing), that just seems, a little weird.  Then there is a later scene where Jimmy tricks Big Monte into passionately kissing the chimpanzee for several panels.  It's played for laughs, sure.  But it all adds up, and makes you start to wonder just what the writer had in mind when he was creating this children's comic.

Eventually, Big Monte discovers that his new love Jimmy is really a man.  He is just about to shoot Jimmy dead, but the chimpanzee steps in at the last minute and saves Jimmy's life by hitting Monte in the head with a baseball bat.  Afterwards, Superman shows up, and finds the stolen jewels.  The story ends with Jimmy Olsen back at work at he Daily Planet typing up his story.  He is surrounded by his male coworkers who are good-naturedly razzing him, saying things like, "Hey cutie, how about a date?"  Which is all in good fun.  But then you notice something... 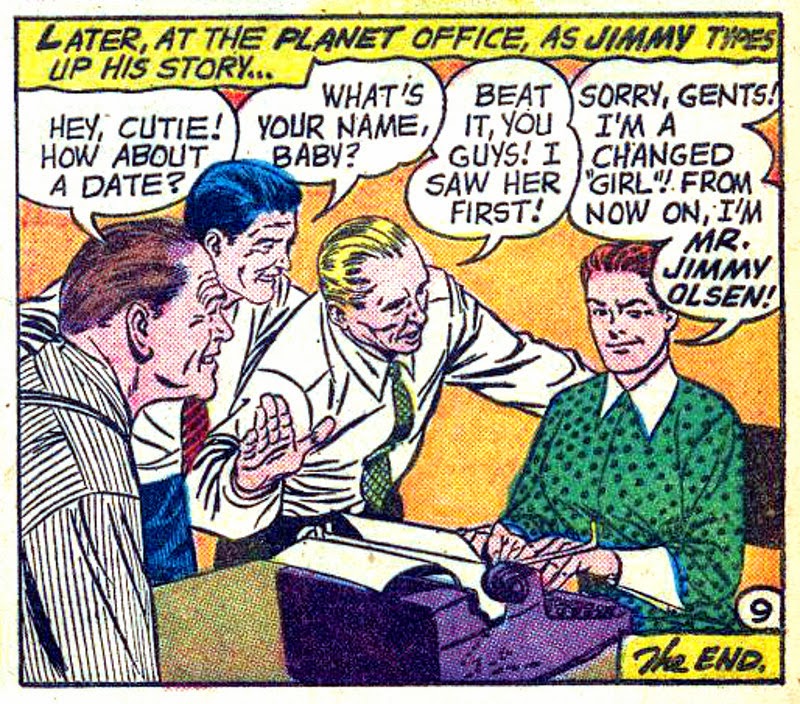 Jimmy's undercover assignment is over.  Jimmy clearly has had time to go home and clean up, because he is not wearing make-up or a wig, and he is not wearing the same clothes he had on in the earlier panels.  But he is still wearing a dress.  There is no reason in the story at this point for Jimmy to be dressed this way, other than that he just likes doing it.  The story ends with Jimmy typing away while wearing a dress, and winking at the reader.  God bless you, Jimmy Olsen.  Live your life the way you want to live it.