Jimmy Olsen uses the "mysterious power of yoga" to cheat at sports.

Jimmy Olsen's Greatest Costumes and Disguises #6
"ORIENTAL RAJAH DISGUISE"
In the "The Five Fantastic Feats of Jimmy Olsen," from Superman's Pal Jimmy Olsen #73, Jimmy disguises himself as an "Oriental Rajah."  To me, the word "Oriental" is a politically incorrect term for an Asian (like someone from China, or Vietnam, for example).  So I was a little confused by Jimmy's costume in this comic, because it didn't fit my definition of "Oriental."  But after a quick bit of research, I found that the definition of the word "Oriental" has changed quite a bit over the years, so I'll assume it made sense at the time this comic was written.
Jimmy's "Rajah" costume consists of a white turban with a big jewel in it, white shoes that curl up at the toes, large white earrings, a long pointy beard, a purple jacket, a white shirt with a frilly collar, white MC Hammer genie pants, and purple socks. 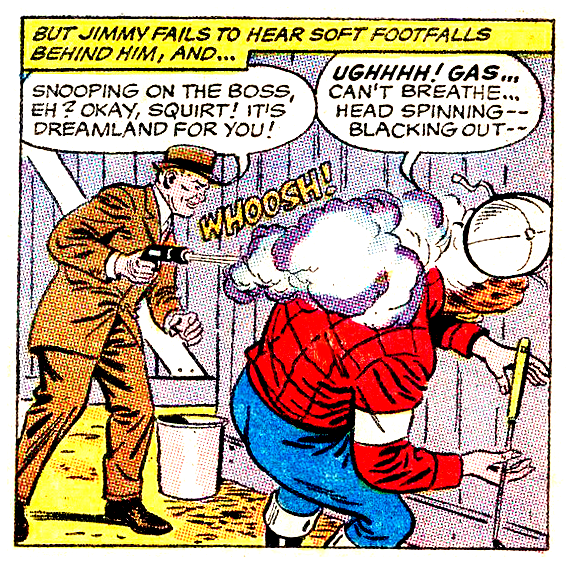 As the story begins, Jimmy is hanging around the race track disguised as a jockey.  He's trying to find evidence that a notorious gambler has been fixing the races.  In the Jimmy Olsen universe, the criminals' names reflect their crimes (see: Mr. Traitor), so naturally this guy is named "Mr. Fix."  Jimmy photographs Mr. Fix doping a horse, but before he has a chance to use the photo, Mr. Fix's sidekick "Shagg" (so named because he is a huge fan of The Shaggs?  If so, AWESOME!) pulls out his gun and shoots him dead... er, that is to say, shoots him with a gun loaded with sleeping gas and steals his camera's film.  Guns that do nothing but put Jimmy to sleep are also a traditional part of the Jimmy Olsen universe (see: same story linked to above).

Jimmy is so frustrated by this turn of events, that he sets his sights not on exposing Mr. Fix, but on exacting revenge.  The story doesn't frame it that way, of course, but hear me out.  Jimmy's plan is to pose as an "Oriental Rajah" who is the absolute master of all sports thanks to "the mysterious power of yoga."  Naturally, Jimmy is cheating at all of these sports, but Mr. Fix doesn't know this.  After demonstrating his yoga sports powers at archery, basketball, and other sports (he even plays baseball and strikes out Mickey Mantle!), Jimmy joins a golfing contest, and convinces Mr. Fix to bet all of his money on it.  Then Jimmy plans to throw the game, causing Mr. Fix to lose all of his money.  Question: How will this prove Mr. Fix has been fixing horse races?  Answer: Not at All.  You see, Jimmy is just out for revenge.  Worse, since Mr. Fix makes all of his money by fixing horse races, he will probably have to fix even more races after this, to make his money back!  Jimmy is actually making things worse.

Eventually, during the big golf contest (which is supposed to be a big, public event, featuring movie stars and other celebrities raising money for charity), Mr. Fix finds out that the Rajah is really Jimmy Olsen.  He threatens to kill Jimmy if he doesn't win the game, but Jimmy doesn't have any of his trick balls with him.  The trick was that the balls were hollow, and inside was a Kandorian who was helping Jimmy cheat!  The Kandorians were residents of "The Bottle City of Kandor," a city from Superman's home planet of Krypton that was shrunk down and kept in a bottle.  The Kandorians have the same powers as Superman, but they are only an inch or so tall.  Without his trick balls, Jimmy can't win the game, which angers Mr. Fix so much that he throws a GRENADE(!) at Jimmy, despite the fact that he is:
However, Jimmy emerges from the blast unscathed, and wearing a super suit!  It turns out though, that it's not really Jimmy at all, but a Kandorian Jimmy Olsen look-alike, from "The Look-Alike Squad," a club on Kandor for people who are look-alikes for Superman's friends.  Apparently, the Look-Alike Squad was monitoring Jimmy, and when Mr. Fix threw the grenade, they burst in to action by:
All in the time it took Mr. Fix to throw a grenade!  Does the Kandorian's shrunken state speed up the flow of time in the bottle or something?  Because otherwise, I'm not sure how that would work.  But that's not important.  The important part is that even Jimmy couldn't prove Mr. Fix was fixing the races, Fix can now be charged with attempted murder!  REVENGE, thy name is Olsen!

The Shaggs - It's Halloween

The Shaggs - My Pal Foot Foot

The Shaggs - Philosophy of the World

Posted by Joshua Raymond at 1:49 PM