The Mad Monsters were originally made by Mego in the 1970s.  These were Mego's version of the Universal Monsters.  The four figures were Human Wolfman, Dreadful Dracula, Horrible Mummy, and Monster Frankenstein.  Mego didn't have the license from Universal to do official versions of these characters, so they are all a little bit off-model, to avoid being sued.  For instance, Frankenstein has his bolts on his head instead of his neck.

The vintage figures are pretty pricey.  Mint condition figures in their original packaging go in the hundreds, and even a loose figure that has been played with can go for $50 or more.  Since that's a bit out of my price range, I was happy to buy reproductions of the Monsters by Figures Toy Co.  Figures Toy Co. is also known as Classic TV Toys.  It's the same company, but they have different websites.  I'm not really sure what the deal is with that...  I think they might be trying to transition away from the name Classic TV Toys, but I'm not really sure.

Figures Toy Co. is the company that is making reproductions of Mego's World's Greatest Superheros Batman figures.  They are also adding some new figures to that line that Mego never made, like Alfred.  Plus, they are coming out with a line of 8-inch retro figures based on the classic 1966 Batman TV show.  While surfing their sites, looking for info about their upcoming Batman toys, I stumbled on a great deal for the Mad Monsters.  On the Figures Toy Co. site, the figures sell for $14.99 each, or the set of 4 for $59.99.  But on the Classic TV Toys site, they have a deal were you can buy all 4 of the figures loose, with no packaging, for only $29.99!   I don't collect figures mint-on-card.  I like to open them up, play with them, and display them.  So I was pretty excited to be able to buy them so cheap loose.  They have some other deals on the CTVT site that aren't on the Figures site as well, so you'll probably want to comparison shop both sites before you buy anything from them.

Judging by photographs on the internet (I don't own any of the vintage Mego figures for a true side-by-side comparison), the CTVT Mad Monsters are not as high of a quality as the original Mego figures were.  The sculpts look a little soft.  This is probably because these were made by making a cast of the Mego figures, instead of being produced in the original molds.  The paint on the figures' eyes and eyebrows looks sloppier on the CTVT figures than on the original Megos.  The figures have glow-in-the-dark hands and eyes, but the glow in the dark effect is pretty faint.  I could see it, but just barely.  There are also several paint defects on the Mummy's face (check out the photos to see).

I've heard mixed reviews about the quality control on CTVT's action figure bodies, lots of stories about figures being cracked, or broken, and what not, so I was curious to see what I would get.  Right away, I was happy to see that none of my figures had any serious issues.  Nothing was broken, or missing, or anything like that.

All of the CTVT figures can stand on their own, which was a pleasant surprise.  Mego-style figures often have issues with that.  You'll still probably want to get a doll stand for them if you want to display them, but that's true of all figures of this type.  The range of motion on the shoulders of my Dracula, Wolfman, and Mummy figures was limited, and it was hard to pose them.  I would chalk that up to the limitations of this type of retro action figure body, but my Frankenstein figure had much more poseable shoulders, and I could move his arms in many more positions.  The Human Wolfman figure also had very loose wrists.  No matter how you posed them, they would just flop back into the same position. 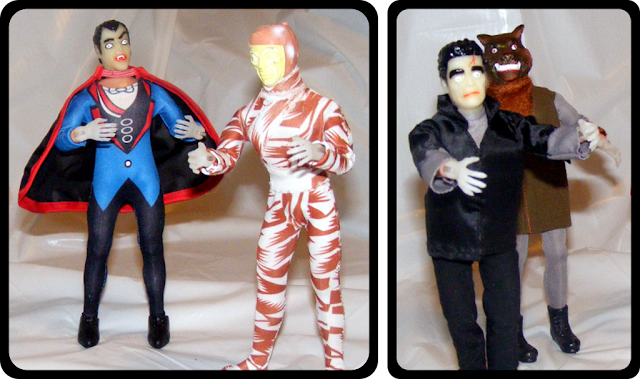 Overall, I would rate the quality of these figures as acceptable, especially for the price I paid for them.  However, I might end up buying some higher quality replacement bodies from someone like Doc Mego, and just swapping out the heads and costumes on to them.  Supposedly the quality of Figures Toy Company's toys has been increasing lately, so hopefully I won't have any similar complaints about their upcoming Batman figures, because I really won't to like those. 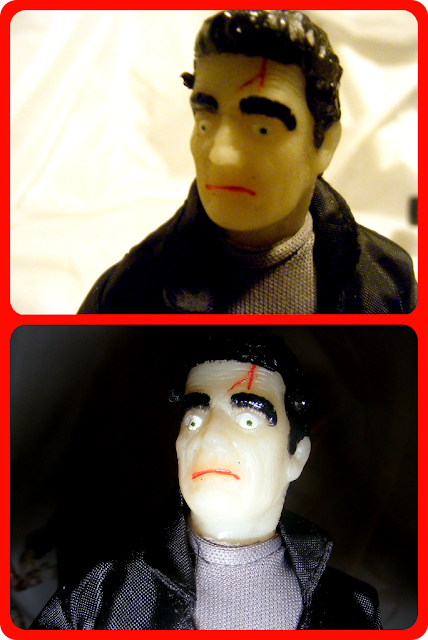 Posted by Joshua Raymond at 5:04 PM