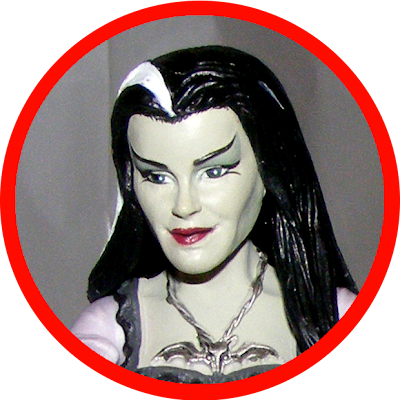 I reviewed the first of these Munsters action figures, Herman Munster, back in January.  I had originally planned to write up the other characters in this line soon after, but I never found the time.  It's probably for the best, though, because what better time to review figures like this then in October, as part of the Countdown to Halloween?


Packaging
The packaging for this toy is adequate.  It's exactly the same as the Herman Munster packaging, except with Lily on it instead of Herman, so you can check out my previous review to read more about it.

Lily's bio on the back of the box reads:


"Born Lily Dracula of Transylvania, the matriarch of the Munster family is the daughter of a vampire, but werewolf blood also runs in her family, as both her brother and her son bear the curse.  Loving dust and decay, she keeps the Munster household nice and messy."

Unlike the Herman figure, though, I found this one to be a pain-in-the-butt to remove from the packaging because of some extremely tight twist ties.  In fact, one of Lily's arms was popped out of of the socket because the twist tie on it was wound so tightly.  This has been a recurring problem with Diamond Select's toys.  I had a Diamond Select Bride of Frankenstein figure whose head was broken off for the same reason.  With my Bride of Frankenstein figure it was actually broken, and I had to use super glue to glue it back on, losing all of the articulation in the process.  With Lily, her arm wasn't broken, just popped out of the socket.  I was eventually able to pop her arm back in to place after several attempts at putting the figure in boiling water to soften it up. 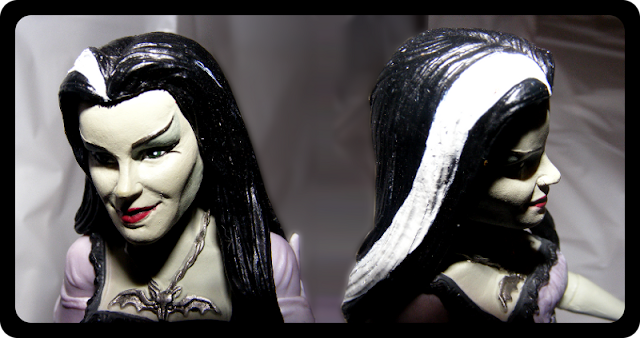 Appearance(Sculpt/Paint/Likeness)
This is a very good looking toy.  The facial sculpt is probably the weakest as far as likeness goes.  It doesn't look as close to Yvonne DeCarlo as the Herman figure does to Fred Gwynne, or the Grandpa figure does to Al Lewis, but it still looks pretty good.  I think they should have painted the white hairs individually instead of with a solid white streak, though.  A little texture there would have gone a long way.  But those are minor complaints.  Overall, I think it looks great. 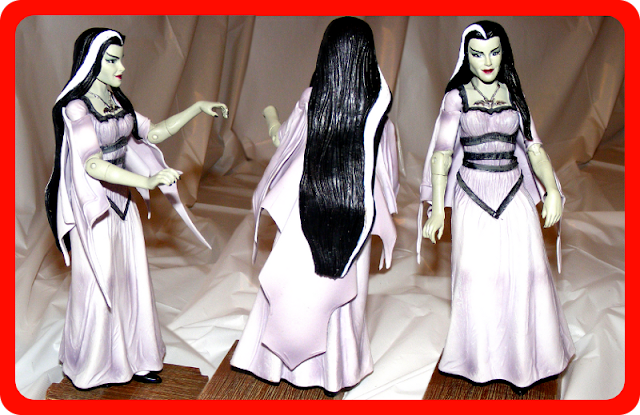 Articulation/Playability
This figure doesn't have much articulation, and is not nearly as good the Herman Munster figure in that regard.  Her plastic dress limits her leg movement, her plastic hair limits her head movement, and her wrists are sculpted in place.  What's left is some movement in her arms. Basically she can hold her arms out, or to the side a little bit, and that's about it. 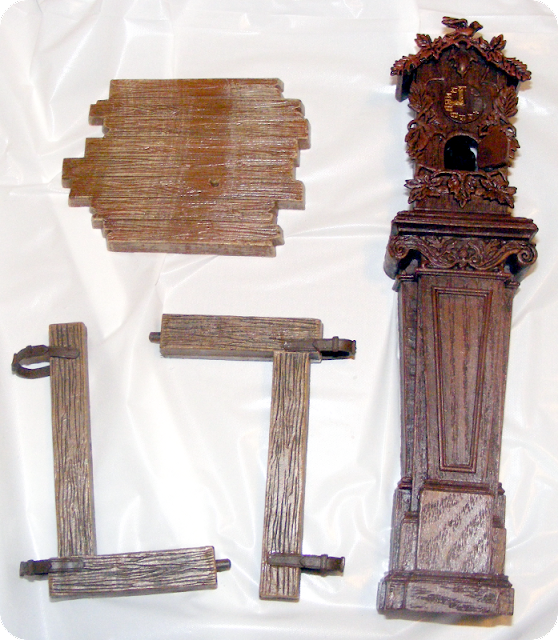 Accessories
Lilly comes with a wooden base, some more pieces of Herman's collect-and-connect electric chair, and the Munsters cuckoo clock. Like the lunch pail that the Herman figure came with, the cuckoo clock is a pretty odd accesory.  But it could look good if you were building a Munsters diorama to pose your figures in.


Final Thoughts
While I'm not as enthusiastic about this figure as I was of the Herman Munster figure, I still like it quite a bit, and I'm looking forward to assembling the electric chair and posing this figure together with the rest of the Munster family.