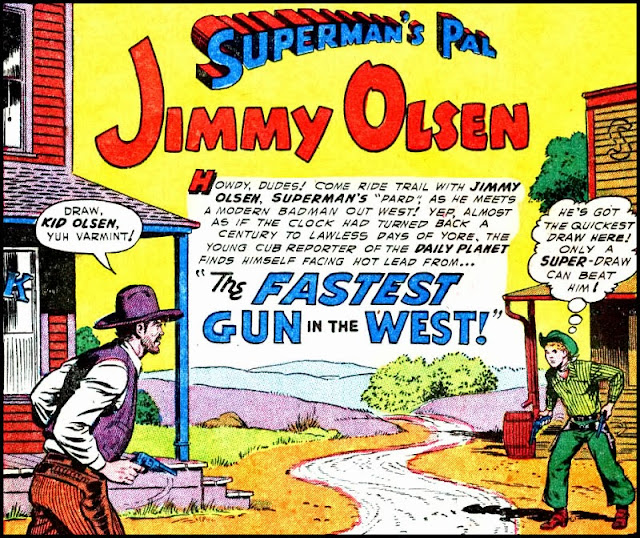 In "The Fastest Gun in the West," from Superman's Pal Jimmy Olsen #3, Perry White sends Jimmy on an assignment to cover a rodeo in a small western town.  However, he never actually tells Jimmy what his assignment is, just giving him the instruction to cover the "big show," and assuming Jimmy well figure out the rest.  Oh, and he sends Jimmy to the wrong town to boot!  Thus, the stage is set for some "hilarious" misunderstandings, as Jimmy tries to figure out what the "big show' is, in the wrong town.

Naturally, the mistaken town Jimmy goes to is totally insane.  The town is "Tumbleweed, U.S.A.," which, judging by it's name, exists outside the borders of any of the 50 (actually 49, at the time this comic was published) states, like Washington D.C., or something.  In Tumbleweed, all technological and cultural progress has been ignored for 100 years, and the people there still live like they were in the Wild West.  If this were any other comic book, there would probably be an interesting story about how something this weird happened.  But this is a Jimmy Olsen comic book.  When weird things happen in Jimmy Olsen comics, you just sort of accept them and move on.

The town is being terrorized by a wild outlaw by the name of "Gunsmoke Gus," who rampages through town firing his gun everywhere, and shooting down any man who dares to challenge him.  The town cemetery is filled with the graves of his victims, but apparently the town has a Florida style "stand your ground" law, so the sheriff can't arrest him for the killings.  Jimmy decides to go undercover as a cowboy to get to the bottom of this "big show."


Jimmy's cowboy costume is a lime green striped shirt, and a darker green hat and pants, along with a bright red neckerchief to replace his bow-tie.  This doesn't exactly strike fear into the hearts of the other gunslingers in town.  Despite this, Jimmy uncovers the truth about Gunsmoke Gus: that he has only been firing blanks with his gun, and faking his killings, paying off members of his gang to pretend to be shot.  Again, if this were any other comic book, there would probably be some sort of explanation as to WHY Gunsmoke Gus is doing this.  But this is a Jimmy Olsen comic book. 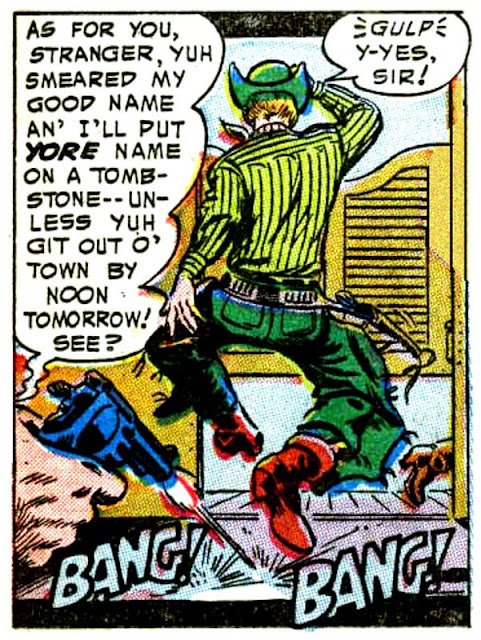 So, Gunsmoke Gus isn't actually committing any real crimes.  He could probably get a ticket for disturbing the peace, I guess, but that's about it.  Despite this, Jimmy decides to duel Gus on the street at noon.  Olsen is convinced that Gus will use blanks to shoot him, and be exposed as a fraud.  Jimmy seems unclear on the fact that since he is NOT a paid member of Gunsmoke Gus's gang, there is no reason Gus won't shoot him with REAL bullets.  So Jimmy draws on Gus and fires two toy guns at him, the kind with the little flags that pop up that say "bang."  Gus then fires at Jimmy with two real guns.  Loaded with real bullets.


Luckily, Superman happens to be flying by and deflects the bullets, probably saving Jimmy's life.  He then asks Gus to leave town, but doesn't arrest him or anything, since, you know, he hasn't committed any actual crime.  Another exciting "scoop" for Jimmy Olsen!