COUNTDOWN TO HALLOWEEN 2013
You won't believe your eyes, in 1933's Universal Monsters classic
THE INVISIBLE MAN 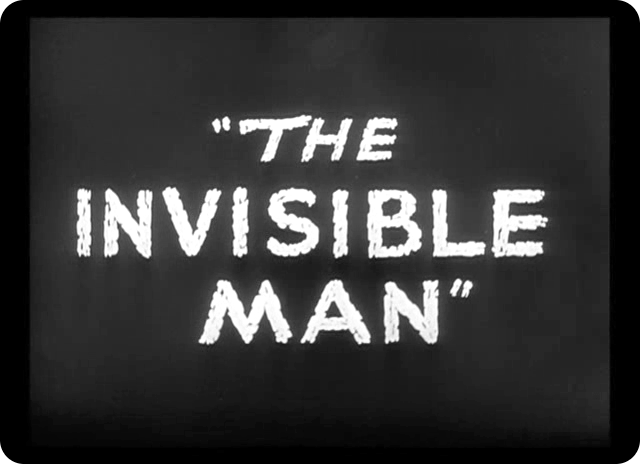 Adapted from the classic H. G. Wells story of the same name, The Invisible Man is one of the best of the Universal Monsters movies.  It stars Claude Rains, in his first American film, as the Invisible Man, and was directed by James Whale of Frankenstein fame.  Like Whale's Frankenstein and The Bride of Frankenstein, the film mixes humor in with the horror and madness.

In the film, Rains plays a scientist who invents an invisibility formula, but makes the mistake of testing it on himself.  What he doesn't know is that the formula induces madness as well as invisibility, and he soon finds himself, tormenting innocent people, plotting murders, and fantasizing about ruling the world, instead of completing his research.

Claude Rains is wonderful in a role that consists mostly of just his voice.  In his more rational moments, he sounds perfectly suited as an intellectual, scientific genius that created an invisibility formula.  But he also shines when his personality shifts to that of a giggling, homicidal madman.  In fact, it reminded me quite a bit of The Joker from the Batman TV shows, sort of halfway between the performances of Mark Hamill and Cesar Romero, making me wonder if Rains's performance had any influence on them.  My only criticism of the film is that I would have liked to see what his character was like before he took the formula, to better understand how it affected his mind.

The special effects were groundbreaking when the film was released.  They still hold up, and are very entertaining to watch, today.  The Invisible Man spawned a number of sequels (the first starring Vincent Price, in his first horror role!) and remakes, but the original film is still probably the best.  I highly recommend it to any fan of classic horror.

More screencaps and a music video after the jump...

Posted by Joshua Raymond at 2:00 PM