Pip-Pip and Tally Ho! Jimmy Olsen Dresses Up Like an Agent of Scotland Yard 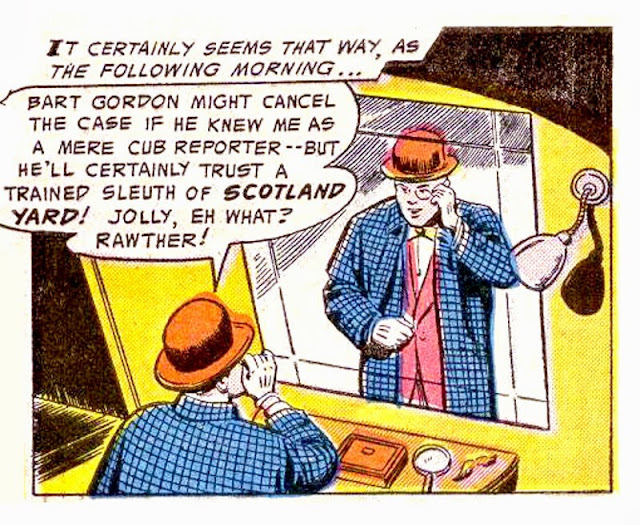 In "The Betrayal of Superman," from Superman's Pal Jimmy Olsen #8, Jimmy goes undercover as a Scotland Yard Inspector who is moonlighting in America as a private eye's assistant.   In the story, Jimmy pledges to fulfill the last case of a dying private eye, and only afterwards discovers the P.I. was hired to discover the secret identity of Superman by a shady blackmailer.  So Jimmy has to lead the man to Superman's secret identity, without somehow betraying Superman in the process.  Naturally, in Jimmy-logic, this requires him to dress up as a second rate Sherlock Holmes. 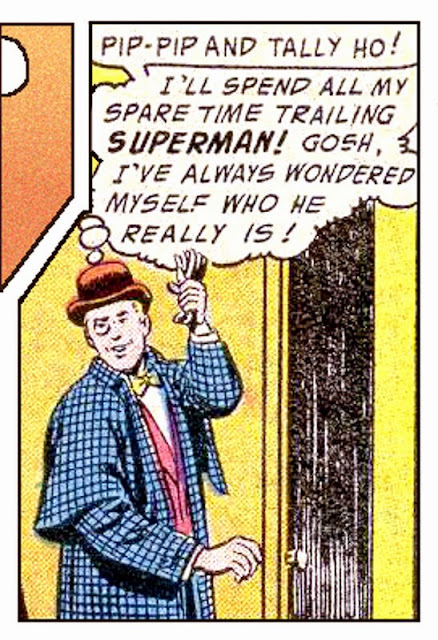 Jimmy's depiction of a Scotland Yard Inspector features a bowler hat, a monocle, and a Sherlock Holmes-style Ulster coat.  Better than his costume, though, is his British accent, which is part Cockney, part upper class, and part random weirdness, peppered with British words and phrases like "pip-pip and tally ho," "blimey," "guv'nor," and "old bean."

My first impression of Jimmy's accent is that it is that the writer, Otto Binder, made it intentionally foolish, to make light of Jimmy's ignorance of an authentic British accent.  But then I remembered the same writer's depiction of "The Earl," a British criminal from Superman's Pal, Jimmy Olsen #32.  That guy is SUPPOSED to be British, yet he speaks with the same ridiculous half upper class, half Cockney accent.  Plus, The Earl wears a monocle as well.  Maybe that's what writer Otto Binder really thought all British people were like. 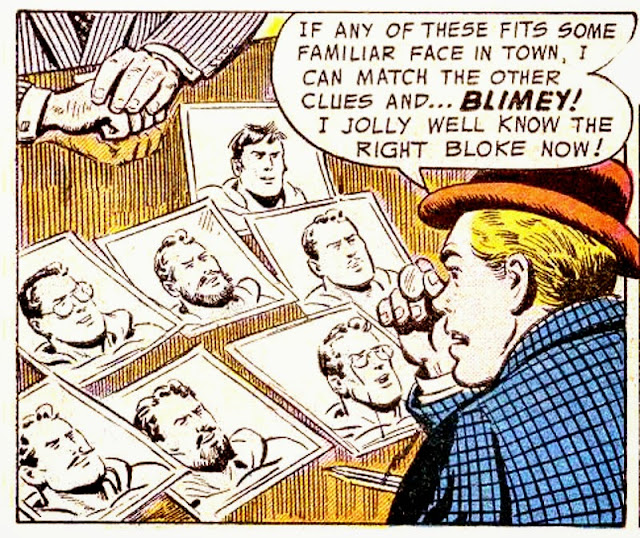 Eventually, Jimmy leads the blackmailer to Superman in his secret identity, but Superman outsmarts the guy by keeping his back to him at all times so the grifter can never see his face.   He even flies through a wall, rather than turn to use the door.  I don't know why Superman didn't just take off his Clark Kent glasses, then he could have turned around and faced him all he wanted to.  The best part of this scene, though, is the way the dude decides to test if Clark is really Superman:  by shooting him in the back!  I'm not sure he really thought that plan though all the way... what would he do if he had picked the wrong guy?

"Well I'm sorry, your honor, but how else was I supposed to know he wasn't Superman BEFORE I shot him?"