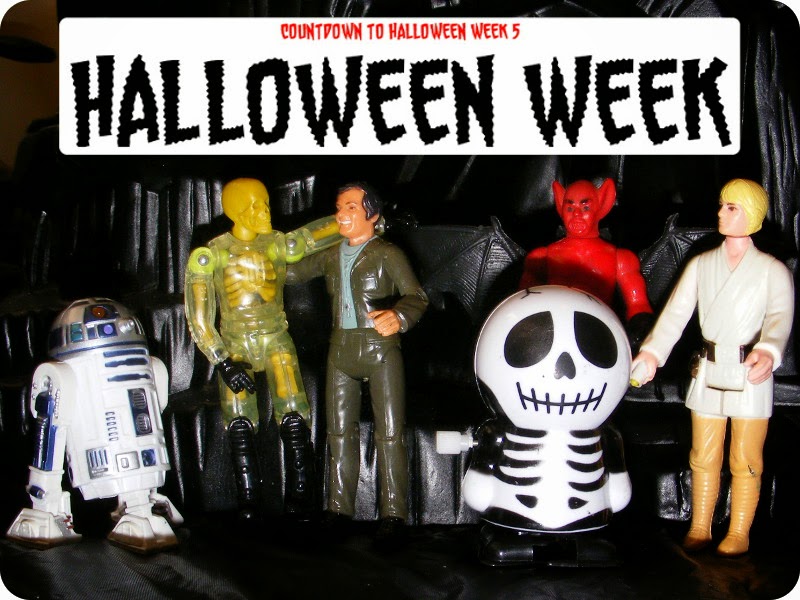 Tomorrow is Halloween!  Are you ready?  I'm kicking off my day-before festivities with this post of random monster toys.  Later on today I'll be taking a look at Bif Bang Pow's Twilight Zone figures.  But first, let's dip in to the Random Halloween Toy Grab Bag... 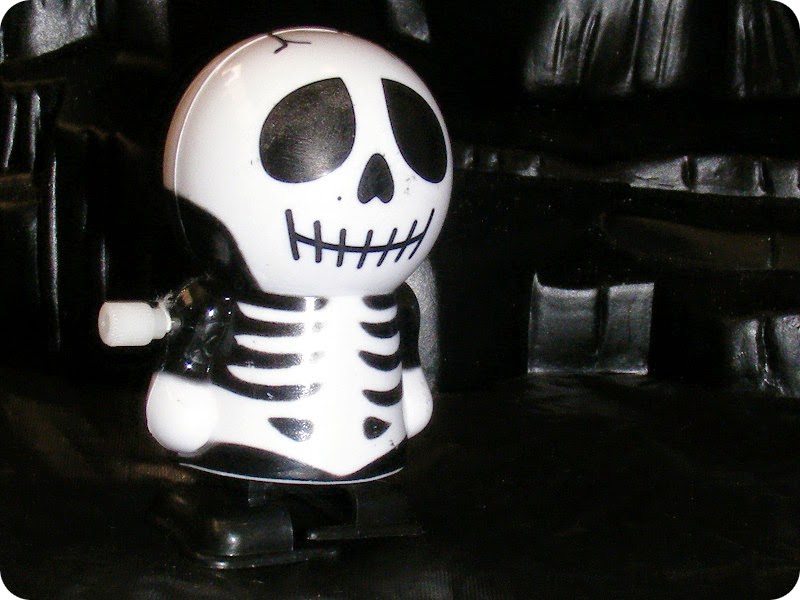 Lately I've been hearing a lot of talk about Walgreens selling collectible action figures.  They even had an exclusive Star Wars Black Prototype Suit Boba Fett figure.  I've also been hearing that they have a good selection of Halloween novelty items. There's a Walgreens down the street from me, but it's been probably a couple of years since I've been in there.  I decided to pop in there this morning, since it was going to be my last chance to do so before Halloween.  I wasn't impressed by their Halloween section at all.  It's late in the month, so maybe all the good stuff sold out, but I didn't see much I was interested in.  Not much except for a wind-up walking skeleton toy.  I've seen pictures of wind-up walking eyeballs from Walgreens, as well, but they didn't have any, and the clerk in the store had no idea what I was talking about when I asked about them.

There toy section was a bust as well.  They didn't have any Star Wars Black figures.  They had a couple of  Funko Legacy Ned Stark figures, a few Game of Thrones Funko Pops, 2 or 3 Walking Dead figures, and a few other random things.  There toy section was a little better than, like a grocery store or something, but it was nothing to write home about.  I couldn't find anything I wanted to buy there. 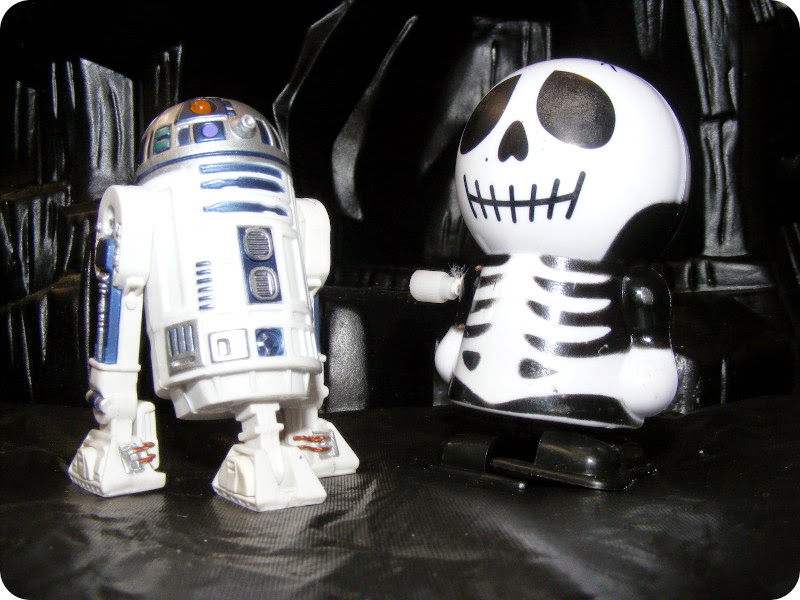 I grabbed a bag of mini Snickers while I was in there, to give away to trick-or-treaters.  Of course, when I got home, I decided to sample them for myself.  Guess what?  They chocolate tasted weird, and had a white powdery coating on it... it had gone bad.  I checked the expiration date on the bag, and discovered that someone had covered it up with a black marker!  Smooth move, Walgreens. 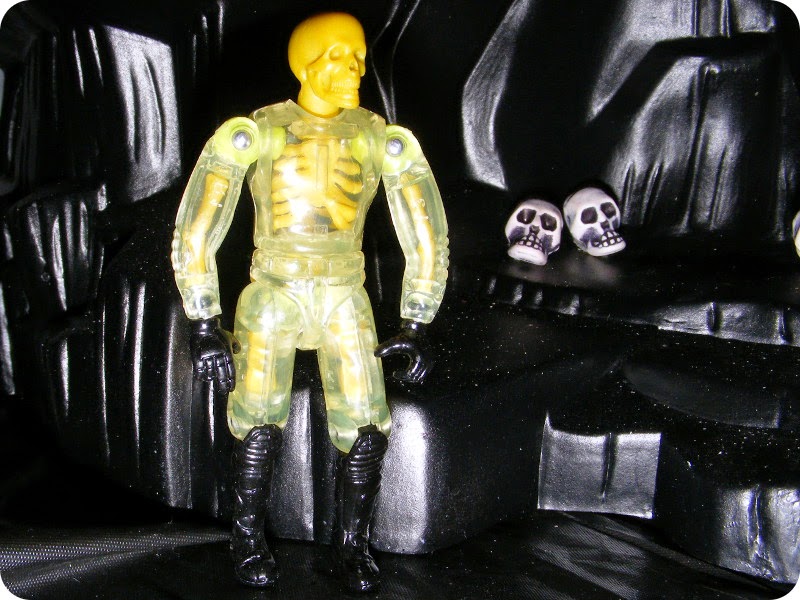 I picked this guy up last month when I was buying a bunch of random monster figures for Halloween.  I didn't know anything about him, but I thought he looked kind of cool.  He's a motocross rider with an exposed skull, and he has a clear outfit that you can see his skeleton through.  They have a bunch of these in different color schemes for sale on ebay. 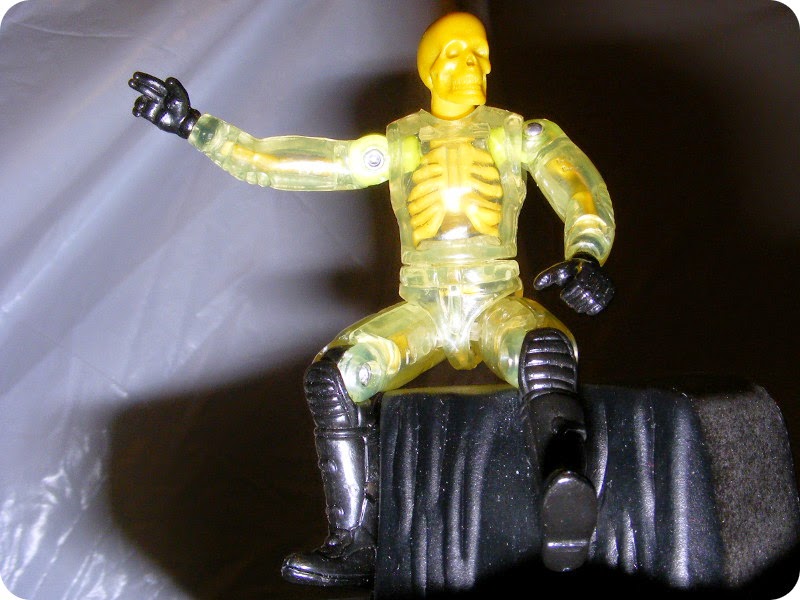 I thought he was some generic dollar store toy, but it turns out it's from a line of toys that Jakks Pacific put out a few years ago, that depicted regular human riders racing against skeleton riders.  Each toy set came with a two motorcycles and two racers.  I'm thinking about popping him on a toy horse and making him an old west Ghost Rider type.

DRAGONRIDERS OF THE STYX DEMON 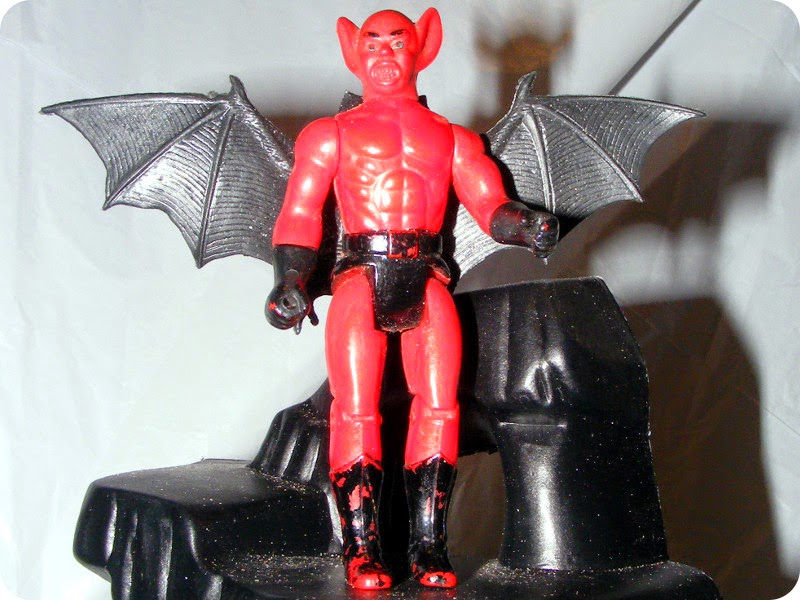 This demon is from a Dungeons and Dragons style toy line from the early 1980s called Dragonriders of the Styx.  There is kind of a funny story behind this guy.  I was looking on ebay to pick one of these guys up for Halloween this year, but all of the ones in nice condition were too expensive.  So I ended up buying a beaten up looking one for cheap, instead.  The Demon came with a set of wings that snapped in to his back, kind of like the attachments on Micronauts figures, but the one I bought was missing the wings.  After I had paid for the figure, the seller wrote me and told me he couldn't find the one I had bought, and asked me if he could send me this different one as a replacement.  He sent me a small, cell phone type photo of the replacement figure.  The figure had the paint wore off, but so did the one I had originally bought, so that wasn't a problem.  But, this one had wings!  So I was happy to accept the replacement, because I thought I was getting an upgrade. 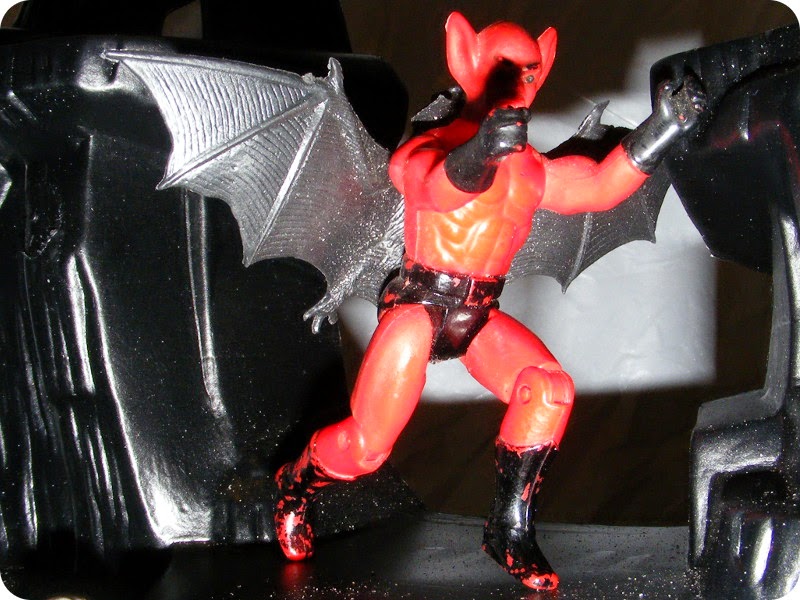 When the figure arrived I played with it for a minute, and thought it was pretty cool.  I was surprised by the wings, because they were rubbery bat-like wings, and I had thought the wings for this figure were hard plastic.  I flipped him around to get a better look at his wings.  It turns out, they weren't his original wings at all.  Instead, someone had glued a rubber novelty Halloween bat to the figure's back!  Should I have felt ripped off?  Maybe.  Instead I laughed my ass off.  I thought it was really funny.  And the truth is, I kind of like having a big bat on his back, it's so weird it's kind of cool. 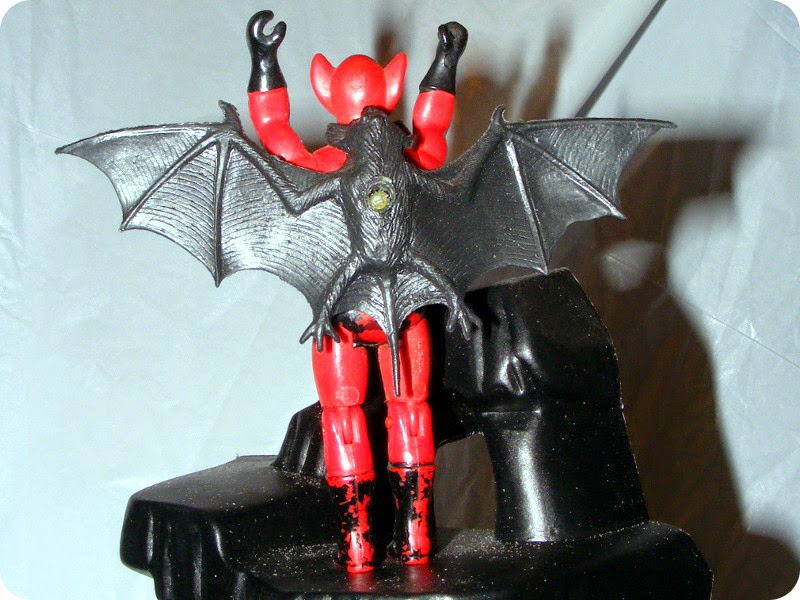 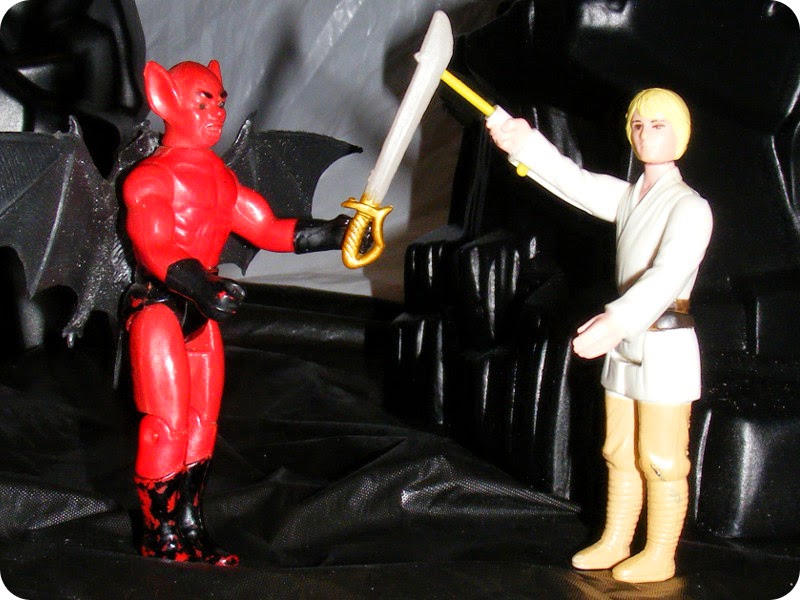 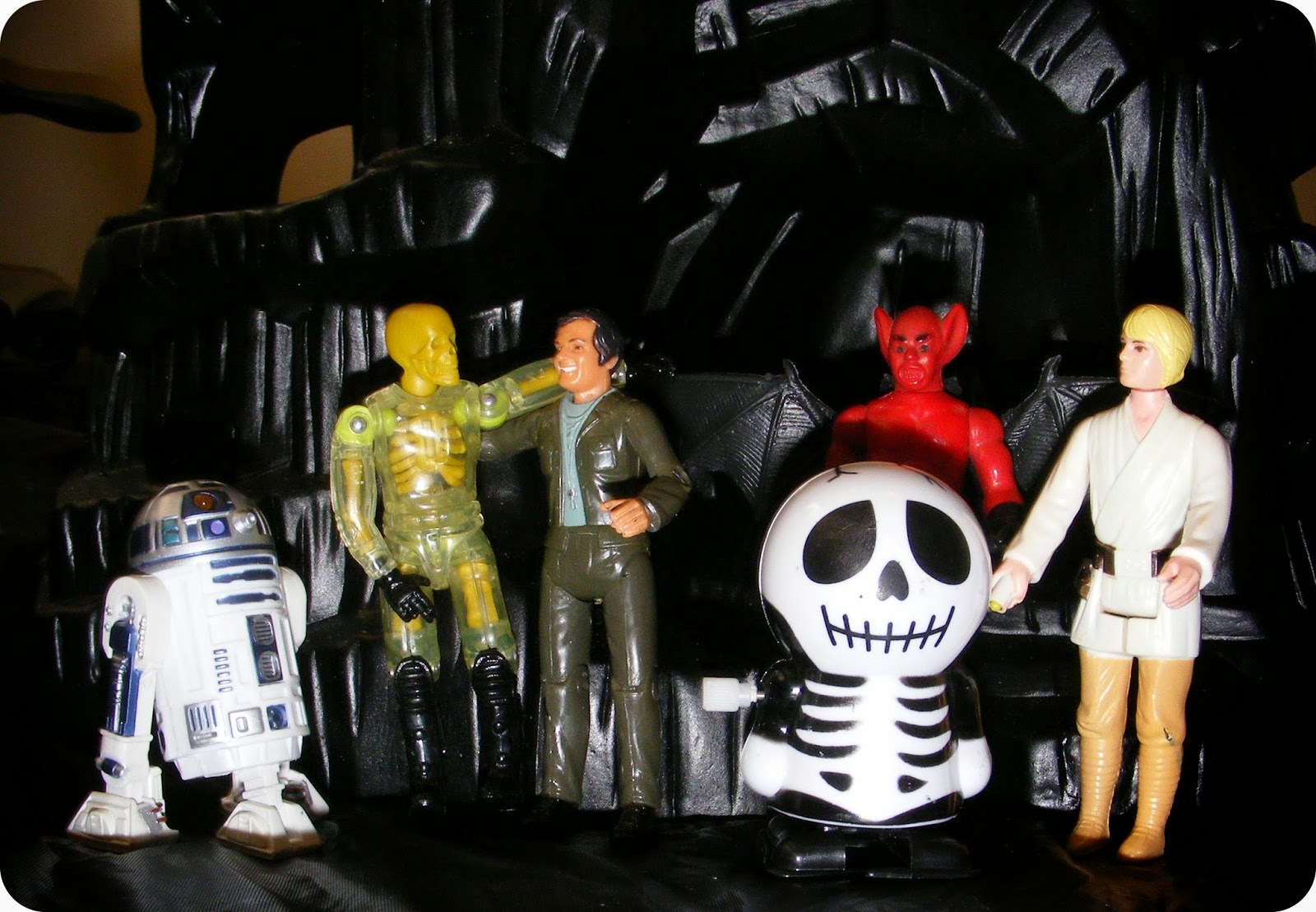 That's it for this post of random Halloween toys.  I'm going to try and do a Twilight Zone action figures post later on today as well.  If not, look for it tomorrow morning.


Frankie "Zeke" Hart - I Am the Red Devil