Sundry Monday! Uncle Gilbert from Diamond Select's The Munsters, Plus the Collect and Connect Staircase 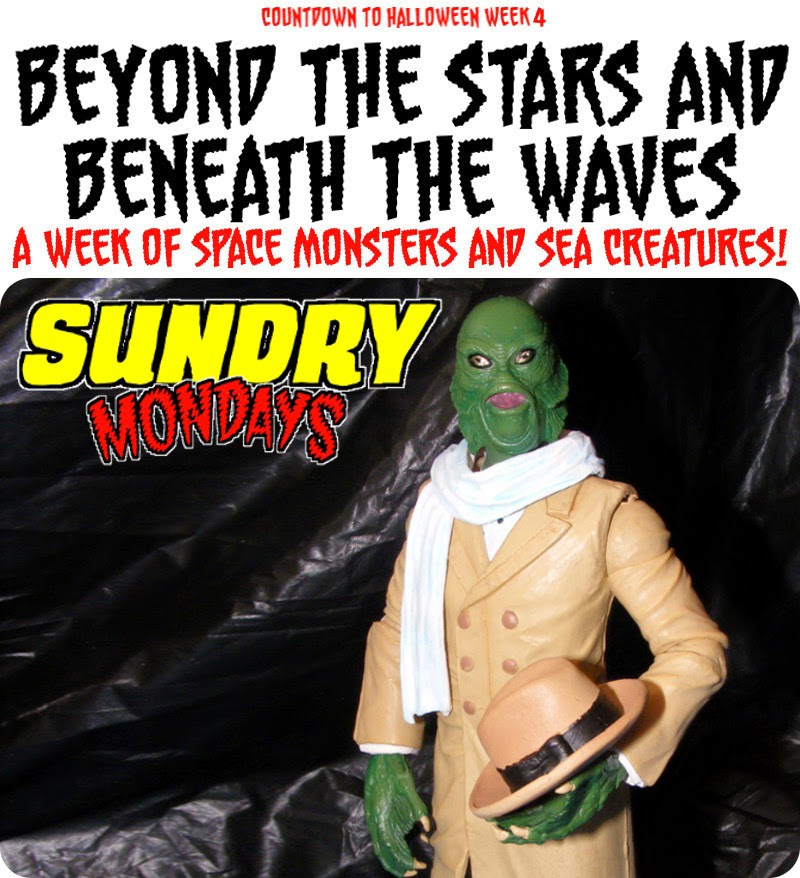 It's Uncle Gilbert from the Munsters!  That's right, Uncle Gilbert, everyone's favorite member of the Munsters family!  What that, you say?  You don't remember him?  Well that's okay, he actually only appeared in one episode.  But look at the guy.  He's the Creature from the Black Lagoon, only wearing clothes!  I guess this was just too wacky of a character for Diamond Select to resist making an action figure of.  I'm going to be checking him out after the break.  Also, since this is the final figure of the four figures from wave 3 of The Munsters, I'm going to be assembling the collect and connect staircase prop that came with all the figures.  All of this, plus a surprise appearance from Adam West... in today's special Tuesday edition of Sundry Mondays! 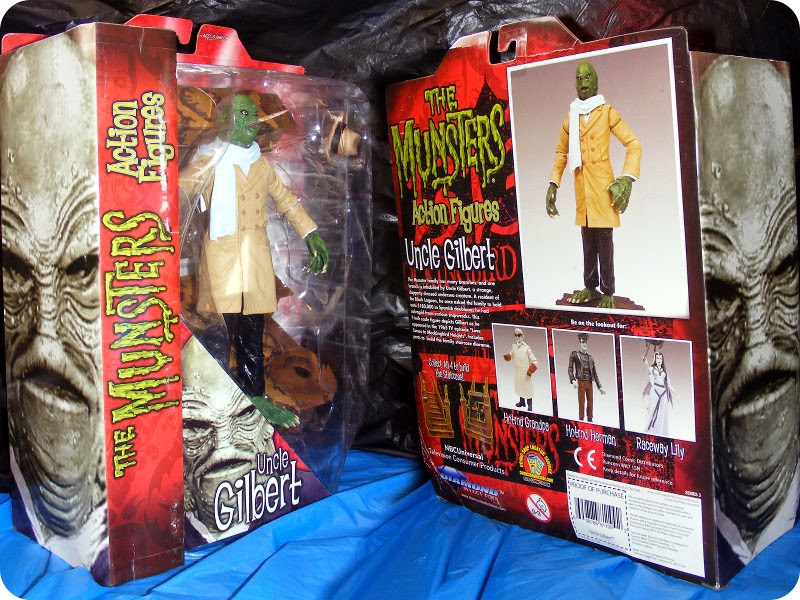 Uncle Gilbert comes in the standard Diamond Select bookshelf package like their other Munsters and Universal Monsters figures.  Surprisingly, this one didn't have twist ties from Hell like Diamond Select's toys usually do.  It had a few ties in it, but they weren't super tight, and weren't twisted up, around, and over by a maniac, they were just twisted the way a normal person would twist them, and they untwisted easily. 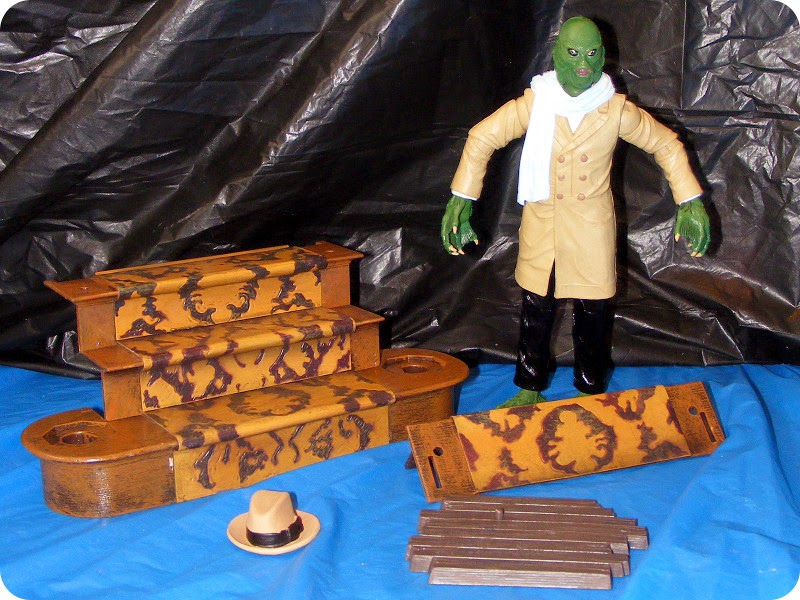 Inside the package is the action figure, two pieces of the collect and connect staircase, Gilbert's hat, and an action figure stand.  Luckily, the stand they included with this figure is the "wood planks" one they used for waves 1 and 2, and it actually has a foot peg in it, unlike they useless no-foot-peg "asphalt" stands they included with the other figures in wave 3. 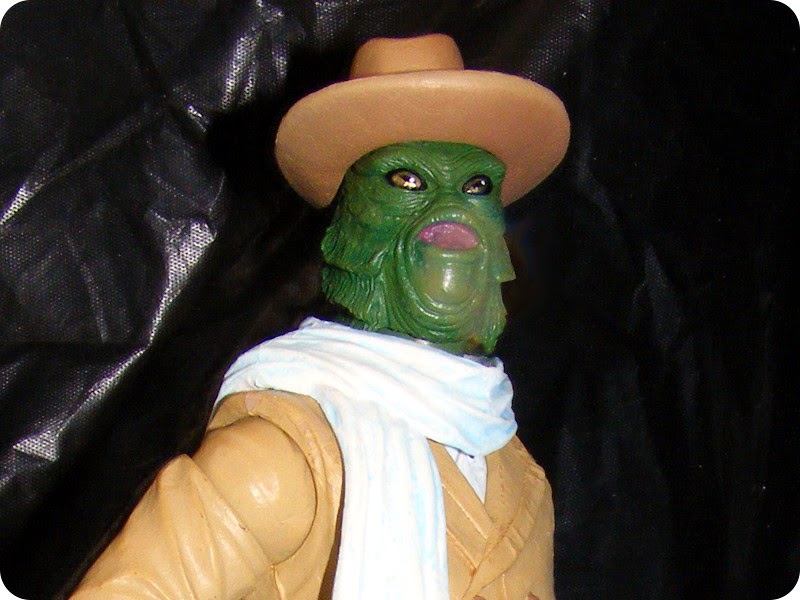 This is a very good looking figure.  It's got a great, highly detailed sculpt.  Most of the pieces are molded or painted in a single color, with a few paint apps.  The jacket has paint details on the buttons and the seams.  Gilbert's skin is molded in green, with a wash to bring out the details, and paint on his fingernails, toenails, eyes, and mouth.  There is also some nice shading on his scarf, although it's hard to see in my pics because it got washed out by the flash on my camera. 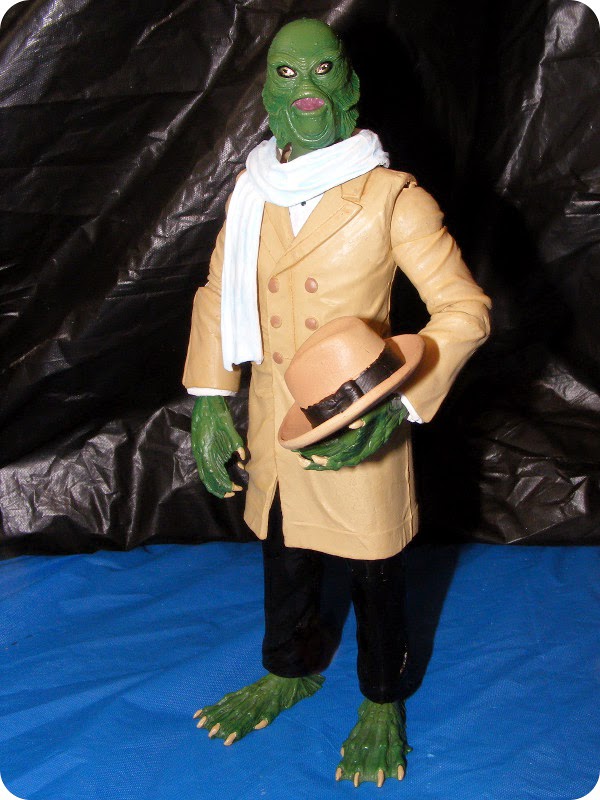 The figure uses a combination of hard plastic and soft flexible rubber. The hands, feet, arms, legs, and head are made out of hard plastic, and the coat, scarf, and hat are made out of soft rubber.  The flexible hat fits securely on his head, but pops off very easily.  The flexible material of his coat allows his legs a greater degree of movement than it looks they would.  His scarf is a separate piece sitting on his shoulders, and you could remove it if you wanted to (although you'd probably have to pop of the figure's head to do it), and the figure is fully sculpted and painted underneath the scarf. 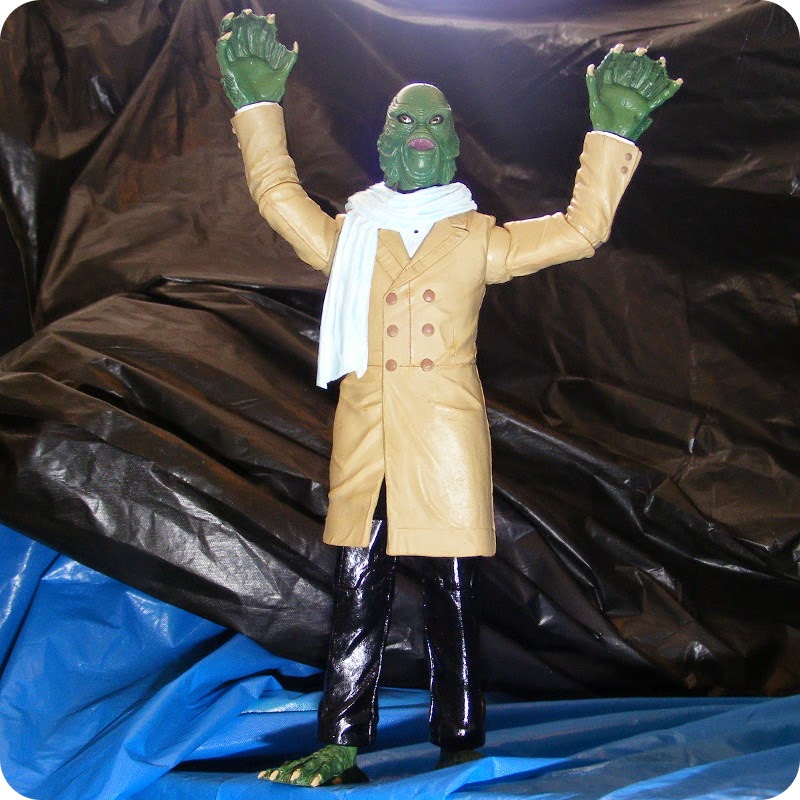 The figure has a good deal of articulation, including ball jointed ankles, knee hinges, cut joints on the thighs, and hips that have sockets to move forward and backwards and hinges to move them to the left and right, although you the jacket obstructs the movement of those to some degree.  He also has rotating wrists, rotating ball hinges at the elbows and shoulders, and a cut joint at the neck.  The figure has no waist or abdominal articulation. 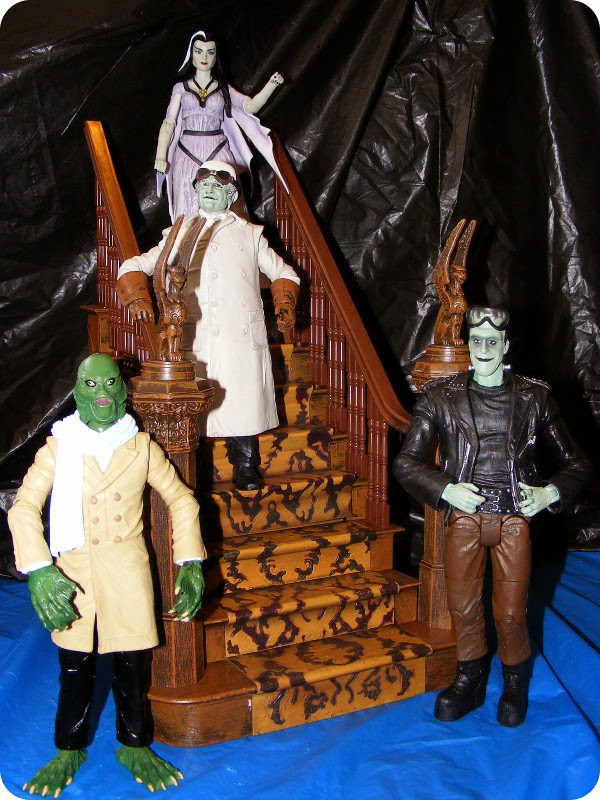 The collect and connect staircase is awesome.  It's pretty big, and I'm not sure where I am going to put it now that it's assembled, but it looks really cool.  It's molded in brown plastic, with a dark brown wash to highlight the simulated wood grain. 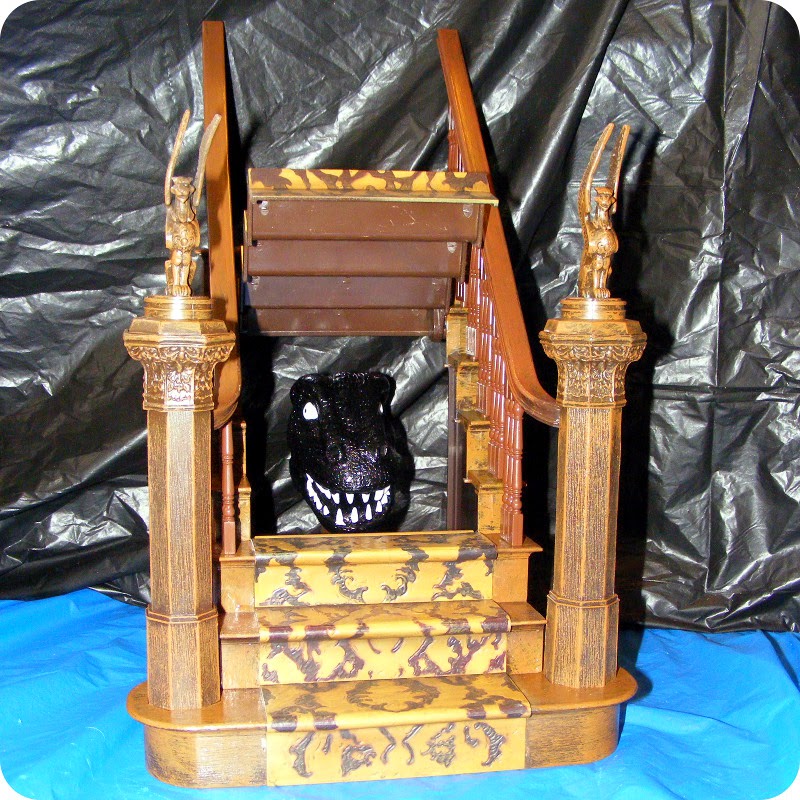 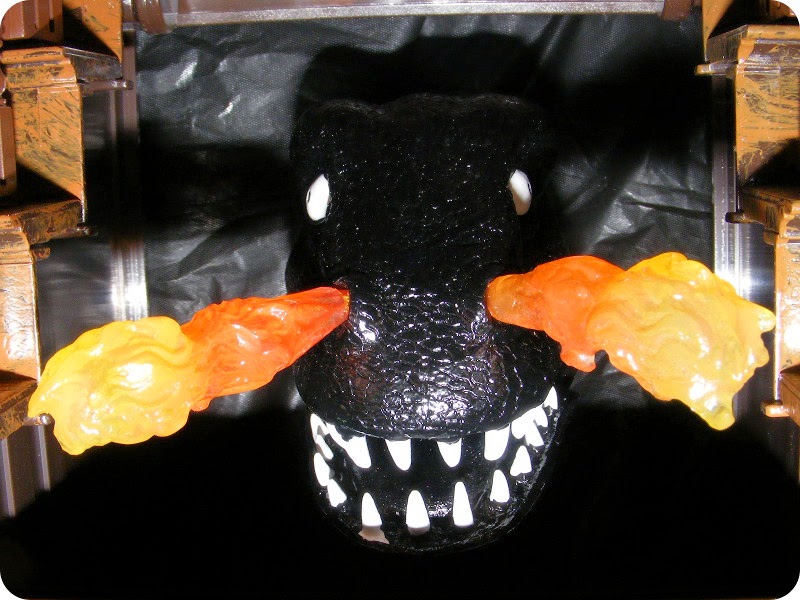 There is a hinge on the stairs so that they flip up to reveal the Munster's pet dragon Spot.  The flames shooting out of his nose are separate pieces that have to be removed before you can lower the stairs. 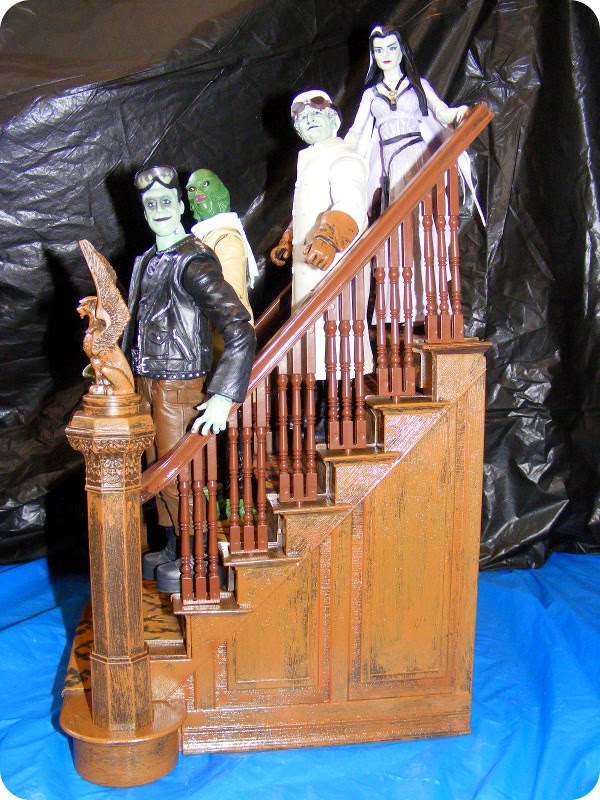 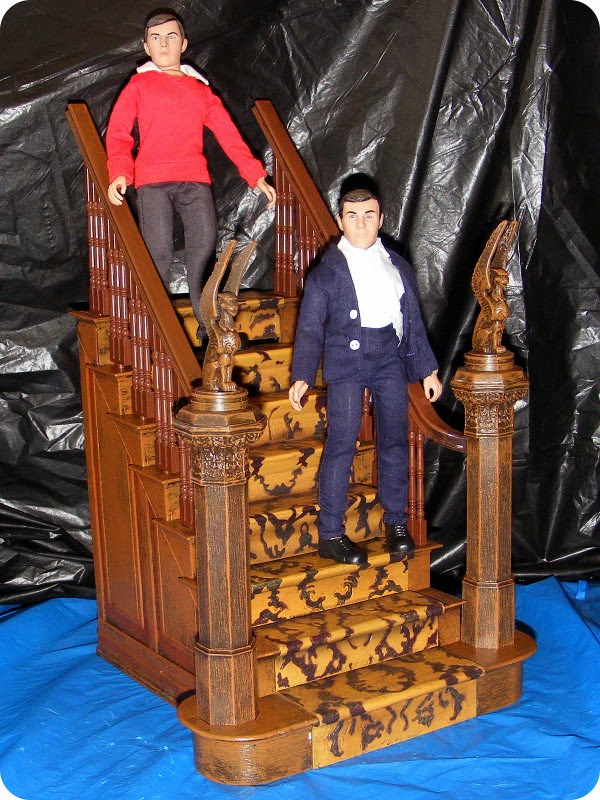 The stairs will make a great prop for any larger size action figures.  I stuck my Figures Toy Company Bruce Wayne and Dick Grayson figures on them and the staircase looked straight out of Wayne Manor.  If you want to use the stairs for Wayne Manor I would suggest not attaching "Spot," though.  Then you could use the staircase hatch as a secret entrance to the Batcave.
Posted by Joshua Raymond at 5:28 AM