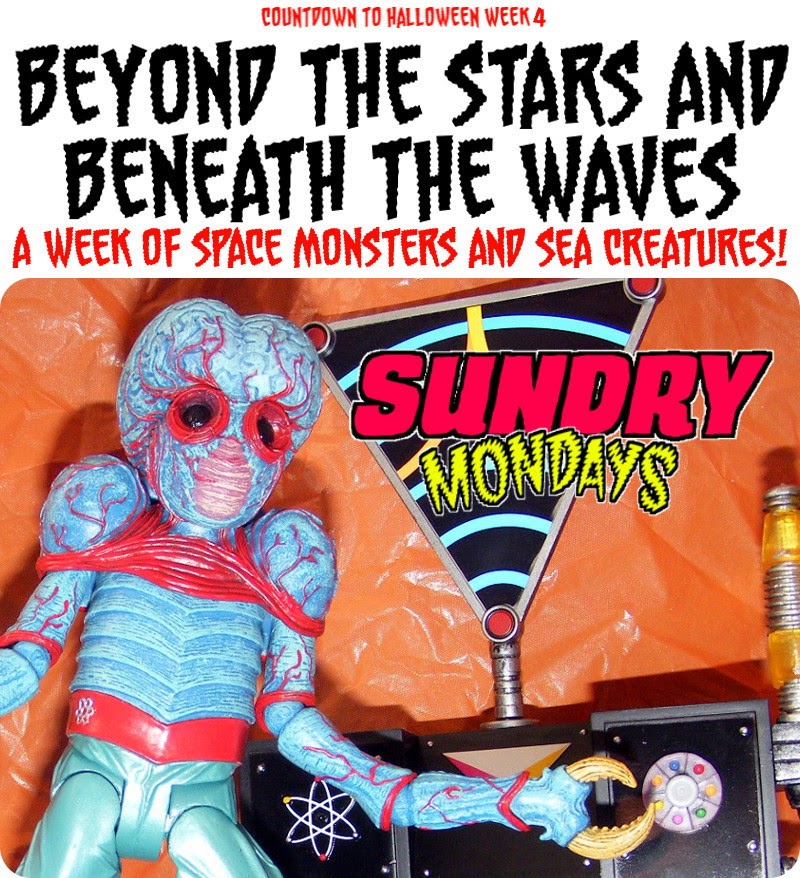 Week 4 of my Countdown to Halloween begins now!  This week's theme is "BEYOND THE STARS AND BENEATH THE WAVES: A Week of Space Monsters and Sea Creatures!"  When it comes to space monsters, you don't get much more spacemonstier than this: it's The Metaluna Mutant by Diamond Select, from the Universal picture "This Island Earth."  Let's go!

The Metaluna Mutant was released in 2012 by Diamond Select, part of their Universal Monsters line of action figures.  It comes in the standard Diamond Select bookshelf packaging, and has the standard Diamond Select sadistically twisted twist ties.  If I'm going to keep buying toys from these guys, I should probably invest in a pair of wire cutters.  Inside the package is the action figure and the Interocitor, a prop from the movie This Island Earth (read my review of This Island Earth here), unless you bought it from Toys "R" Us, in which case you just got the figure.


The sculpt and paints on this guy are amazing.  The Metaluna Mutant is probably the strangest, most outré design of any of the Universal Monsters, and this action figure captures it perfectly.  He has a giant exposed brain, weird goggle eyes, clawed hands and feet, and is covered in veins!  Yet this doesn't stop him from wearing a stylish pair of slacks, with an "atom" symbol on the belt.  Oh, and he's got veins on his pants too!  Are his pants alive?  Weird.

This figure has some unusual articulation.  His shoulders are covered up with a solid piece that stops them from moving.  This makes the sculpt more accurate to the movie, but I don't really think that's worth a total lack of movement, especially because with all of those veins on his shoulder plate, hiding the seams of a shoulder joint should have been easy.  They kind of make up for it by giving him two rotating ball jointed elbows on each arm.  This lets the figure move his arms in some strange alien ways, which is kind of cool.  But he can't lift his arms over the level of his chest, or hold them straight out, instead he just kind of flops them around sideways.  His head is also really limited in movement.  He's got a decent amount of articulation in his legs, except the hinge on his right hip is stuck, and it feels like it will break if I try to move it, although I don't really need to pose this figure doing the splits, so that's no big loss.

The Interocitor is a great looking accessory.  It doesn't actually do anything, but I really like it's retro sci-fi design (in fact, I think it might end up in my Adam West Batcave... it would fit right in there).  Of course in the movie, the Mutants didn't use it, instead it was a communication device the Giant Forehead Aliens used to talk to the planet Metaluna from Earth.

Despite my disappointment with the lack of shoulder articulation, I still love this figure.  It just looks so weird and cool.  If you're a fan of the Universal Monsters, oddball sci-fi movies from the 1950s and '60s, Mars Attacks, or anything like that, than this figure needs to be in your action figure collection.

Posted by Joshua Raymond at 4:57 PM