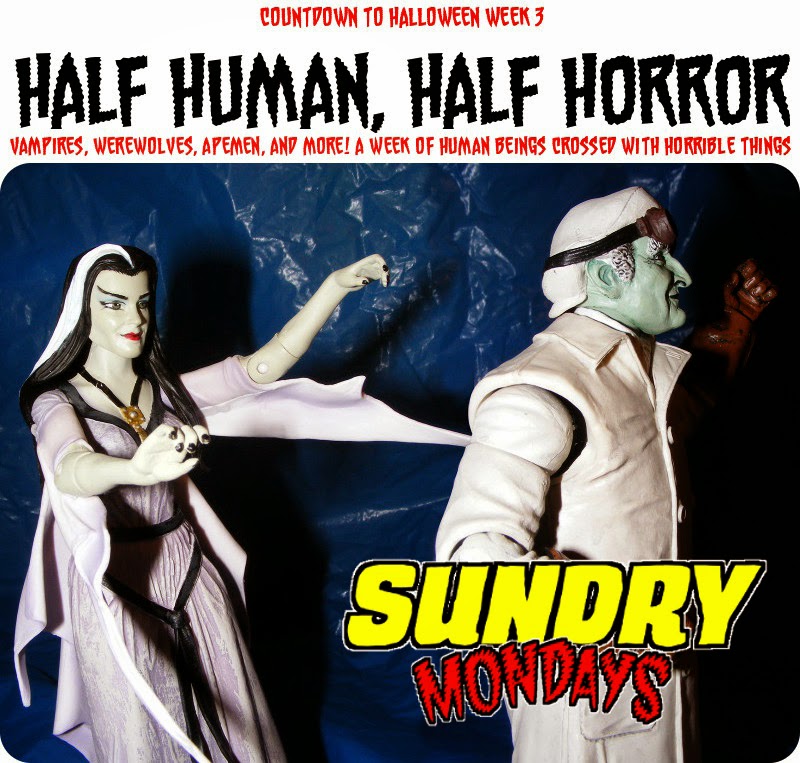 Week 3 of my Countdown to Halloween officially begins with this post, as I begin HALF HUMAN, HALF HORROR: Vampires, Werewolves, Apemen, and More, a Week of Human Beings Crossed With Horrible Things!  I'm kicking it off with a look at two action figures of Half Human, Half Bats, aka Vampires!  It's Grandpa Dracula himself, along with his daughter Lily, from Diamond Select's The Munsters action figures.  In particular, it's "Raceway Lily" and "Hotrod Grandpa," both based off of their appearance in the Munsters episode "Hot Rod Herman."  let's check them out after the break.

The figures come in the same Diamond Select bookshelf packaging that Hotrod Herman came in (see my review of Hotrod Herman here). Diamond Select did an amazing job of securing these figures with twist ties!  The ties were super tight, and one even permanently bent Lily's parasol accessory!  Awesome!  They even would twist the ties in alternating directions, and over and under each other, to make it as hard as possible to remove the ties, so I ended up spending over half an hour getting these toys out of their packages.  Diamond Select must know how much we love spending time with their twist ties, and they go out of their way to make the pleasure last!  Thanks, guys! (I better shut up now before my computer's sarcasm meter goes in to overload.)


Both figures come with connect and collect parts to make the Munsters staircase and pet dragon Spot.  Next week I'll be opening up the final figure in this wave, Uncle Gilbert, and then I'll be assembling the staircase.  Both figures also come with that same piece of asphalt that Hotrod Herman came with, the one that is supposed to be an action figure stand, but Diamond Select forget to put a peg on to attach to the figures feet.  Great.

Lily comes with a parasol, like the one she held in the Hot Rod Herman episode.  In the promotional photos, she is holding it over her head.  But in reality, the grip on her hands is way to wide for her to hold it up like that.  I can put it on her hands, where is can rest loosely.  But it will fall out if you try to make her hold it up high, or if you move the figure even a tiny little bit.

Grandpa comes with two accessories, a pair of goggles and an alternate hand holding a cigar.  The goggles fit great, and didn't require any stretching to fit on his head like Herman's goggles did.  I was able to remove and reattach his regular hand easily, but I could not get the alternate cigar hand onto his arm no matter how hard I tried.  I'm guessing I probably could do it if I held it under boiling water for 20 seconds to soften it up before I try putting it on.  I haven't tried that yet, but if I do, I'll add it in to my Uncle Gilbert review next week. 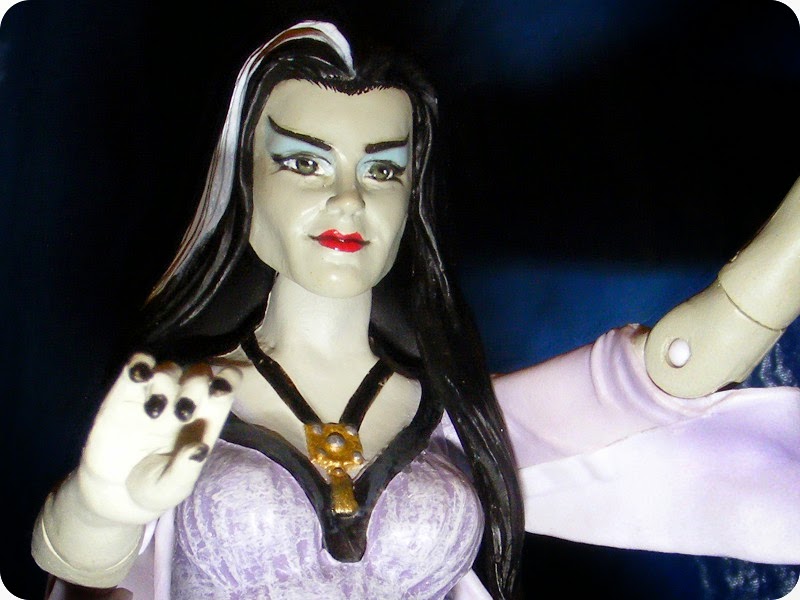 I've got to admit, I loved the Hotrod Herman figure, but I'm a lot less enthusiastic about these two.  They are both good looking figures, but the Lily figure is almost the same figure as Diamond released in Wave 1 (see my review for that figure here).  I really don't need two nearly identical figures of the same characters.  At least Herman and Grandpa got totally different outfits.  I really think they should have come up with something to make the Lily figure more unique.  If they couldn't have found a more unique outfit for her to wear in one of the episodes.they could at least have painted her dress a different color (the show was in black in white, so they have a lot of leeway there).  Grandpa does have a unique outfit, so he's not so bad, although honestly, it's not an outfit I really needed to have. His classic Dracula suit is so much cooler.  Neither one of these figures is really that bad, but I don't think I would have bought them if it wasn't for the collect and connect staircase pieces.

That's all I have to see about these figures.  Check back thought the week to see more toy reviews of werewolves, vampires, apemen, and other weird creatures, my latest Halloween themed music playlists, a few movie reviews, and who knows what else (well I guess I know, but you don't, so come back to find out)!
Posted by Joshua Raymond at 2:49 PM