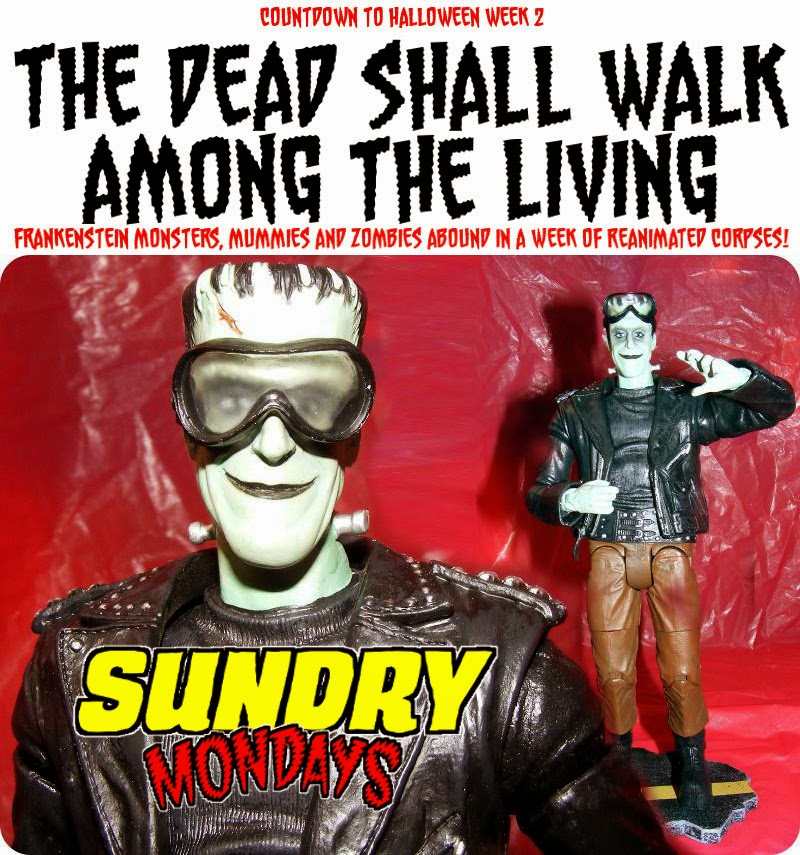 Welcome to "THE DEAD SHALL WALK AMONG THE LIVING: Frankenstein Monsters, Mummies and Zombies Abound in a Week of Reanimated Corpses," Week 2 of my Countdown to Halloween.  Today I'm going to be looking at one of Dr. Frankenstein's more oddball creations: Herman Munster!  Specifically, it's Hotrod Herman, from Series 3 of Diamond Select's The Munsters Action figures.  With this figure, Herman is dressed up in leather drag racing gear, sort of looking like a monster version of Marlon Brando in "The Wild One!"  It's based on the 1965 Munsters episode "Hot Rod Herman."  My pictures and thoughts on this figure are coming up after the break.

Hotrod Herman comes in a big clamshell package, with a color portrait of Herman on the side, and some action figure pics and a bio on the back.  Inside, we have Herman himself, plus his hat and goggles, a piece of asphalt for him to stand on, and several pieces that can be combined with pieces from the other four figures in this series to build the Munster's staircase, and their pet dragon Spot.  The pieces inside were secured with a plethora of twist ties, although I'm happy to report they weren't as super tightly twisted as the other action figures I've bought from Diamond Select, and it really wasn't difficult to remove them this time. For some of their previous Munsters figures, I've literally spent more than twenty minutes trying to remove the figures from their packages, so this was a big improvement.


The goggles and hat are separate pieces, and if you want the goggles to sit over the hat, like Herman is pictured wearing on the back of the box, you have to physically STRETCH out the plastic on the band of the goggles.  It's not made of a stretchy rubber band type material, it's just kind of soft plastic, and I was worried that I would break it, but I finally got it stretched over the hat, it looked great.  It also looks great worn pulled up over his head without the hat.  However, after stretching it to fit on the hat, it hangs a little too loosely when worn over his eyes, which is unfortunate. It's too bad they didn't make it out of some kind of elastic material instead.


The asphalt road action figure stand is kind of weird.  The previous Munsters figures came with a stand with a peg in it, the peg fitting in the holes in the figures' feet to hold them securely in place.  Hotrod Herman has peg holes in his feet, but there isn't a peg on the stand.  So it's pretty much pointless.  Luckily, the figure is well balanced, and stands just fine on his own, so it's not really a problem. 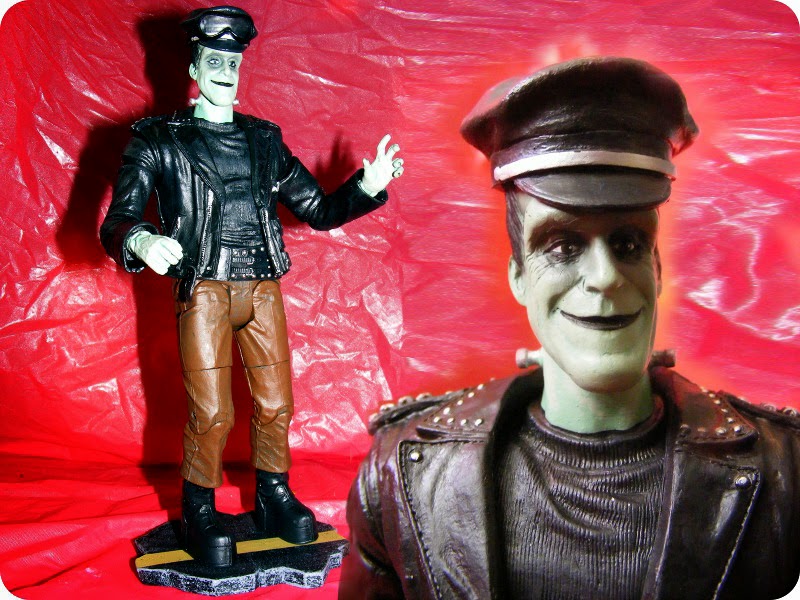 The figure is not super-articulated, but it has a decent amount of articulation, especially for a Diamond Select figure. Most surprising is that his hips are hinged, so his legs can spread out as well as move forward and back, as if the figure was designed to ride a motorcycle or a horse.  I think I'm going to try and find a 1:10 scale motorcycle to try and pose him on, he's got the look for it.  He also has cut joints in his thighs and hinged knees, so that's a lot of leg articulation... although he has NO articulation at all on his ankles or feet, which means you can't really pose him standing in an extreme pose and keep his feet flat on the ground, which is a shame.  His legs also don't move forward enough to put him in a full seated position, so you probably wouldn't be able to put him in a Hot Rod, even if you found one in the right scale. 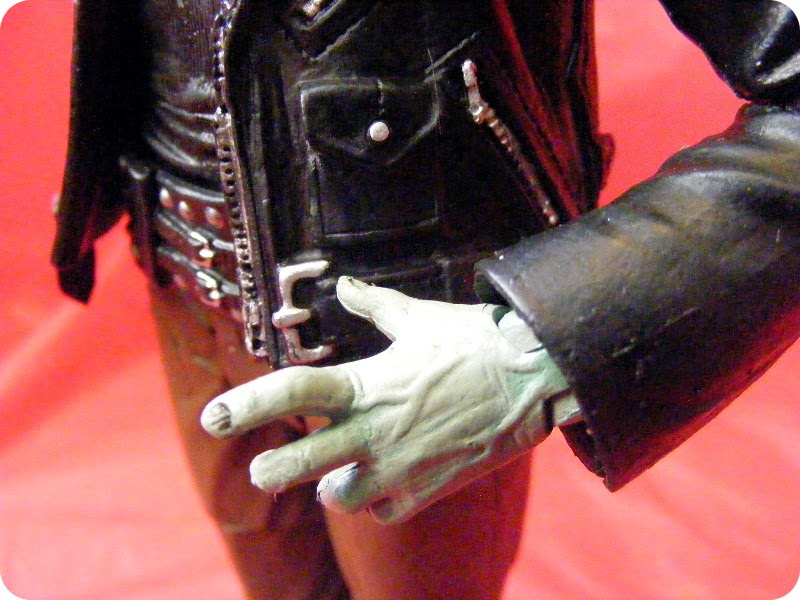 His arms have have plenty of articulation, including ball joints at the shoulders, cut joint at the biceps, and hinges at the elbows and wrists, bot of which have rotating cut joints as well.  His head moves up and down and side to side.  He doesn't have waist or abdominal articulation, though.

The figure LOOKS fantastic.  The paint and sculpt are perfect.  There is a subtle dark green wash over Herman's light green skin to bring out the details. His face paint looks great even in closeup photos. His hot rod club logo painted on the back of his leather jacket is nice and clean. 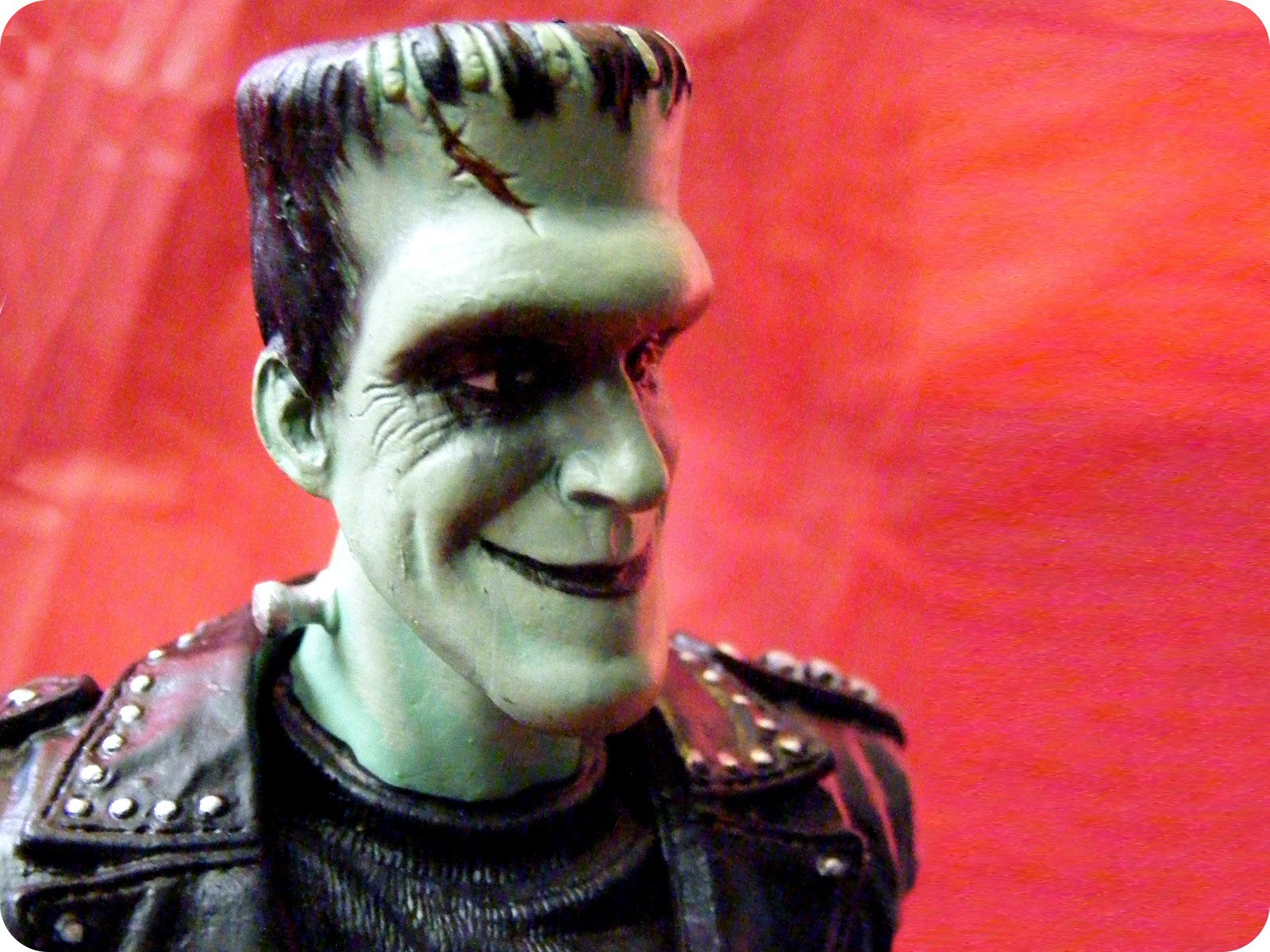 Overall, I really love this figure.  Yes, they could have done a better job with the articulation, but how articulated does Herman Munster really need to be?  He's supposed to be stiff and lumbering.  And the figure just looks so good... I'd probably like this figure even if it was a solid piece of plastic.  I'll be opening up the rest of the figures from series 3 this month as well.  Look for Grandpa and Lily during Week 3's "HALF HUMAN, HALF HORROR: Vampires, Werewolves, Apemen and More, a Week of Human Beings Crossed With Horrible Things," and Uncle Gil to appear during week 4's "BEYOND THE STARS AND BENEATH THE WAVES: A Week of Space Monsters and Sea Creatures."  Once I have all four figures opened up, I'll also be assembling the staircase and Spot, so that should be fun.
Posted by Joshua Raymond at 3:44 AM