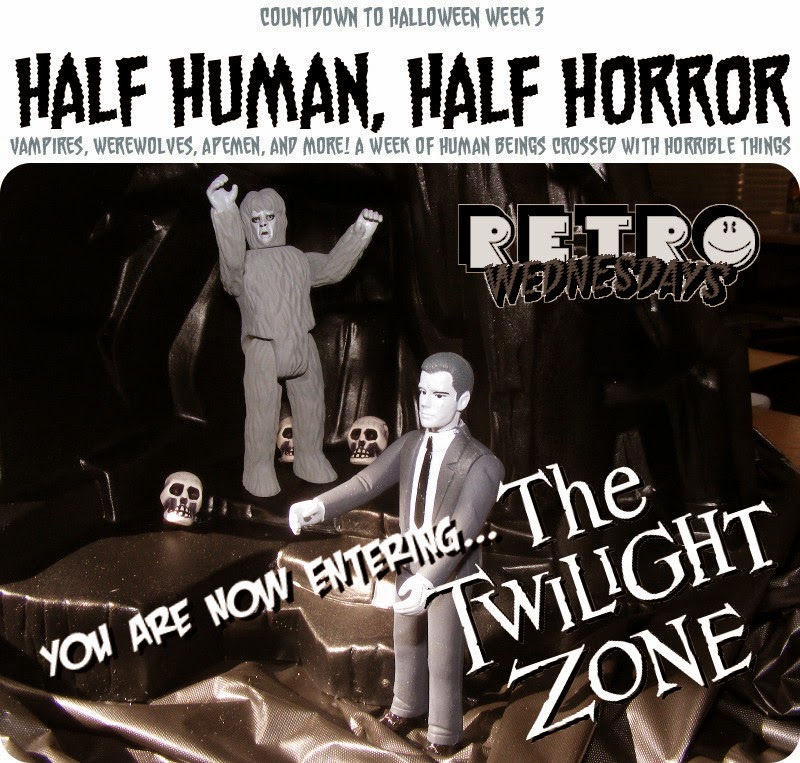 I've mostly been reviewing Funko and Super 7's ReAction figures on Retro Wednesdays, but they aren't the only people making retro figures in this scale.  Today I'll be checking out two of Bif Bang Pow's Twilight Zone figures: Bob Wilson and The Gremlin, from the classic William Shatner starring episode "Nightmare at 20,000 Feet."  Check them out after the break!

Bif Bang Pow's Twilight Zone figures come in pretty much the same format as Funko's ReAction figures.  The all come on retro style cards, with the Twilight Zone logo and a photo of the character from the episode they were in.  The figures are in black and white, to match the show.  There are a limited number of color figures as well, but Bif Bang Pow only made 500 of each.  I didn't preorder the color ones early enough, and the only one I ended up getting was Kanamit from the episode to serve man.  The color ones are still available on Ebay and some toy collector sites, but expect to pay a premium if you want to get them now.  At first I was a bit disappointed with the figures being in black and white, because they don't mix as well with other vintage and retro figures.  On the positive side, though, the black and white figures look great when they are all displayed together, the monochrome helps to unify what would otherwise be a random looking assortment of characters.

The figures feature the standard Kenner style 5 points of articulation.  In addition, Bob Wilson comes with a handgun, like the one he stole in the episode.  The sculpts are very nice.  The Bob Wilson figure does resemble Shatner, but the likeness is just off enough to give it that classic retro look.  The Gremlin is pretty goofy looking, but it was goofy looking on the show, as well, so that's as it should be.

Posted by Joshua Raymond at 9:39 AM