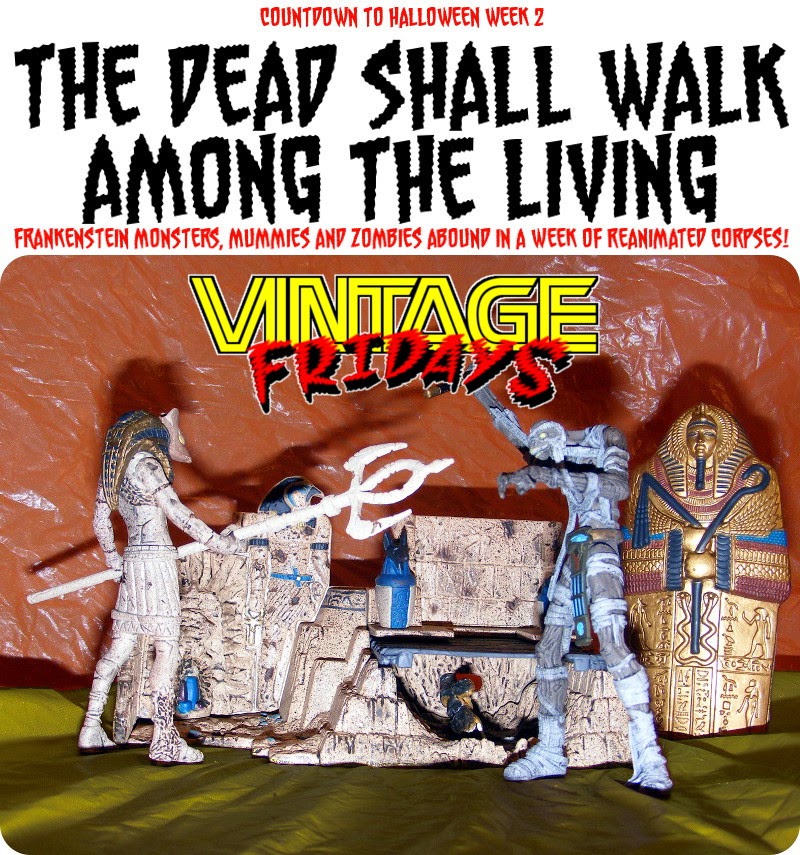 I've already photographed a few of my Mummy action figures on this playset, now I'll be taking a look at the playset itself, as well as all of the accessories and figures that come with it.  Let's take a trip back in time after the break!


This toy was released by McFarlane Toys in 1998, as part of their Todd McFarlane's Monsters series.   It came with two action figures, several accesories, and a playset in several pieces that need to be assembled by snapping them together.  I had one problem with mine: the hinges on the sarcophagus came off.  They weren't broken, but I'm going to need to use some super glue on them to keep them in place.  I'm not sure if they were always loose, or if the glue just weakened after sitting in the package for 16 years.  But it's an easy fix, so I'm not too concerned about it.

The playset was very easy to assemble. It's scaled for four inch figures, but works great with 3 and 3/4 inch figures as well.  I've highly recommend it if you collect horror figures in this scale, like Remco Mini Monsters or Funko ReAction Universal Monsters.  It would also be great for any other action figures in this size range, like Adventure People, Micronauts, Battlestar Galactica, Indiana Jones figures, or even G.I. Joes.  It looks great on it's own, or it could be something you could build a whole diorama around.  It has several fun features, including:


The sarcophagus is hinged and opens up, and can hold a mummy or other action figure.  It has a spot on the playset base where it stands firmly in place, but it can also be removed to place it separately.

Underneath the sarcophagus is a wood floor that can be slid back to reveal a snake pit.  There are "two" snakes, which are actually two snakes sculpted onto one solid piece of plastic.  You can grip the snakes from a slot behind the playset to move them around.

The canopic jars are loose and can be placed wherever you like.

ANUBIS STATUE
The Anubis statue snaps into place on the wall of the playset, and hold a removable staff in his hands.  The figure twists at the waist, so you can make it swing the staff, like it was a built in security feature in the tomb.  The figure can also be popped off the wall and used as an action figure, as if the statue has come to life.

THE MUMMY
The Mummy figure is sculpted and painted with lots of detail and looks pretty gruesome. He reminds me quite a bit of "Eddie," the mascot of heavy metal band Iron Maiden.  He comes with a staff he can carry.  The figure has limited articualtion and isn't balanced very well.  In order to get him to stand while holding his staff out in the photo above, I had to point his other arm backwards to keep him from being to heavy in the front and toppling over. 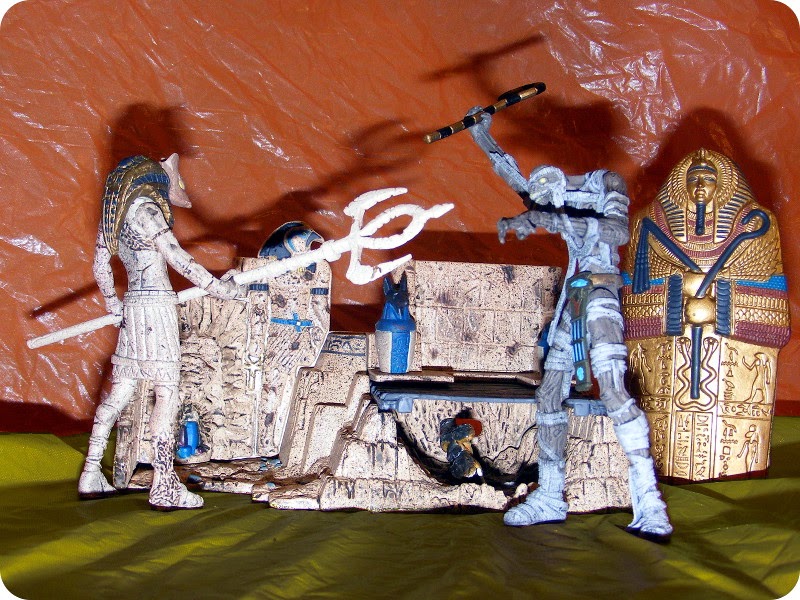