The Saga of Crystar "Zardeth, The Wizard Who Worshipped Chaos" Action Figure - Remco (1982) 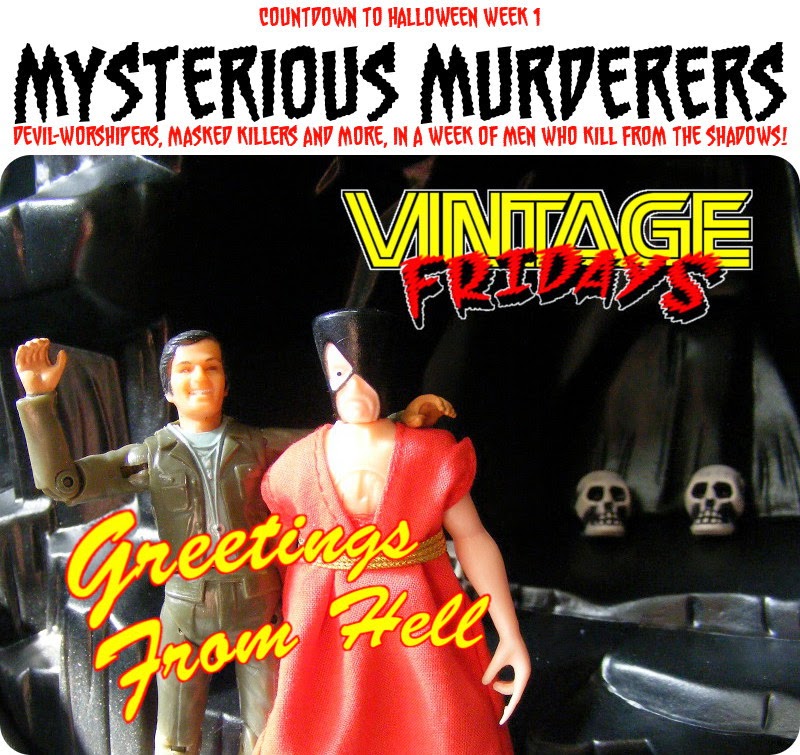 Every Friday, I review a different vintage 3 3/4" action figure, and today I'm featuring Zardeth, the evil wizard from Remco's The Saga of Crystar line of action figures.  Does he fit in with this week's "Mysterious Murderers" theme?  Err... kinda, I guess.  He does wear a Phantom of the Opera style mask!  Okay, that's settled, then,  Let's check out this EVIL action figure after the break!

Zardeth.  Now this is an EVIL action figure.  Heck, he's got "deth" right there in his name!  And he's creepy looking, too  He's making some kind of weird, pointy hand gestures that are just one finger shy of throwing up the heavy metal devil's horns.  It's an unusual gesture to see on an action figures hands, and I really do think it looks creepy.


He's wearing a red sun dress, with a gold-lamé belt, so I guess he's a crossdresser, which is cool.  Maybe he's more of a glam rocker than heavy metal, that would explain why he's having trouble throwing up the horns.  He has some weird head gear on that covers half his face, and when I first saw the figure, I thought it was his hair, and he was like, emo, or something.  Seriously, the guy just needs to pick one musical genre and go with it.  Although now that I think about it, he is a wizard, so he's probably prog.

Okay, this review is going off course...

Ahem.  Accessories.Yeah, accessories!  Zardeth came with two accesories.  The first was this magnifying glass type crystal thing, which I think all of the Crystar figures come with.  He also comes with a weapon that looks like a cross between a question mark and a mace.  Since he's a wizard, I don't really see him as a mace swinging type, so I'm thinking this is a magical artifact of some kind.  An EVIL magical artifact.

So, I have to apologize for the randomness of this review (I'm not really sorry).  In order to post every day for the Countdown to Halloween, I kind of have to just make these posts up as I go,  I don't really have time to plan them out or think them through.  Does that mean the posts well just get weirder and weirder as we get further along in the month?  Probably.  And this is only "Day Three."  I wonder what they will be like by the time we actually get to Halloween?  Scary.

Next week's theme will be THE DEAD SHALL WALK AMONG THE LIVING: Frankenstein Monsters, Mummies and Zombies Abound in a Week of Reanimated Corpses!  I wonder what vintage 3 3/4" action figure I will be reviewing for that?  Check back next week to find out!

Bonus Hint: It's NOT the Remco Mini Monsters Mummy!