My original goal for the Countdown to Halloween was to do one post a day, and to have a unique horror theme for each week.  I've missed a few days here and there, but I've also posted two or three posts in one day on others, so over all, I'm still ahead.  However, as we head into week 5, I'm having a tough time keeping it up.  Work and other things have gotten in the way a bit, and eaten up more of my blogging time than I anticipated they would.  So for the rest of the week, I'm going to change it up a bit.  Instead of doing a theme (this week was supposed to be "Supernatural Evil: A week of Ghosts, Demons, and Mythological Creatures") I'm just going to be doing a catch-all horror week.  This will allow me to finish up some of the posts that were supposed to be done earlier this month, but didn't get finished in time.  Also some of the posts will be a little shorter than usual, just a few pics and some brief text.  I currently have 12 unfinished Halloween toy features, although a few of them I will probably combine into group features.  I'm going to have to drop my last couple of movie reviews I had planned, though, for now (those take too long to write and edit all of the screencaps).  Still I've got plenty of stuff to finish out the week, and my plan is to do two posts a day until Halloween.  So week 5 of my countdown, now known simply as "Halloween Week," begins now... 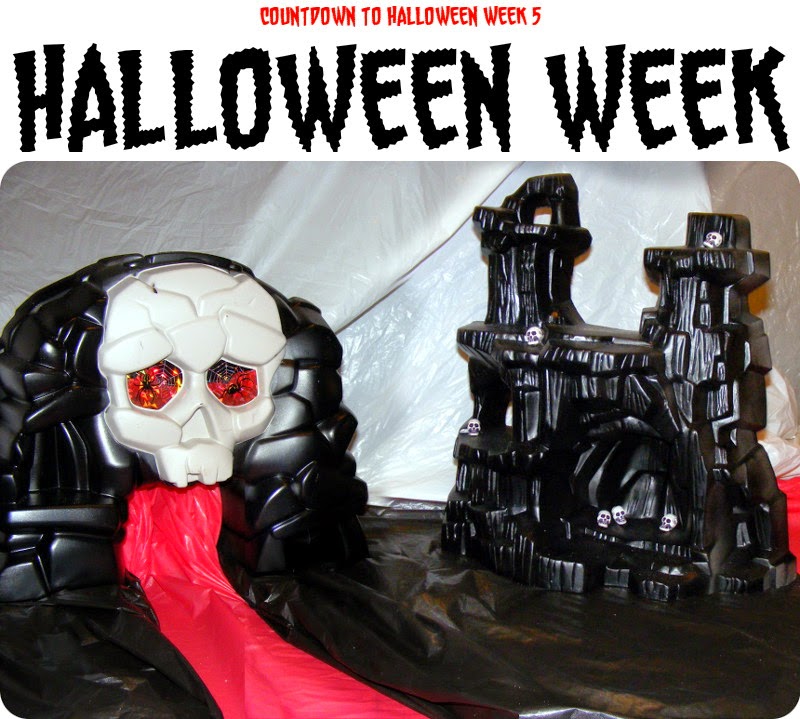 I've been using a variety of different playsets in the backgrounds of my Halloween action figure photo shoots.  Several of them were McFarlane Toys playsets, which I also reviewed.  I also used a few Fisher Price Imaginext playsets that I picked up at thrifts stores.  One of my playsets is unique, though.  It's my "Phantom Hellscape" playset, which I made by combining a couple of preexisting playset pieces, with a few cheap add-ons I picked up at the dollar store, and giving them a custom paint job.  Read more about it after the break!

x
I started off with a Tim Mee Toys Battle Mountain Playset it's a simple plastic mountain, molded in gray plastic.  It's designed for smaller figures, such as green plastic army men, but it works pretty good for 3 3/4 and 4 inch figures as well.  I've been wanting one for a while now, ever since I saw this post about it at the Lair of the Dark Horde blog.  Then I saw that The Four Horsemen had a Battle Mountain that they had painted black, and were using it to display there Power Lords action figures at various toy shows and comic conventions.  I thought that looked really cool, so I finally got around to buying one for myself, as well as a can of black spray paint.  When I was getting ready to paint it, I realized I had another playset piece that would look good in black.  It was part of a Playmobil Pirate Island set (I first wrote about this set here).  I didn't have any of the accessories for it, just the basic Skull Island piece that I found used at a thrift store.  After painting them both black, they made a nice matching set.

Next I made a simple base for them, by taking a piece of cheap foam board and cutting it into the basic shape I wanted, then covering that with a black plastic tablecloth.  Both of those I got at a local dollar store.  Then I used a couple more dollar store table cloths, a red one for the "lava," and a white one for the phantom background.  I finished it off by buying a Halloween choker and bracelet set from the dollar store that was decorated with small plastic skulls.  I tore the skulls off of the choker and bracelet and used them to decorate the mountain.

This made a great backdrop for a lot of the figures I was taking pictures of for Halloween.  I ended up using it as the Twilight Zone for my Twilight Zone figures, The River Styx for Charon from Clash of the Titans (those pics will be up later this week), a river of lava for Zardeth and Moltar from The Saga of Crystar , and an alien planet for the Micronauts Alien Invaders.

When I have some spare time, I think I'll fix this set up a little more, and add some texture and details to the paint job instead of the flat black it is now, and maybe make a more permanent base for them, possible out of papier-mâché.  It was a fun thing to work on, and it has me thinking of making more sets like this or adding new stuff on to sets I already have in the future.

Posted by Joshua Raymond at 9:27 AM