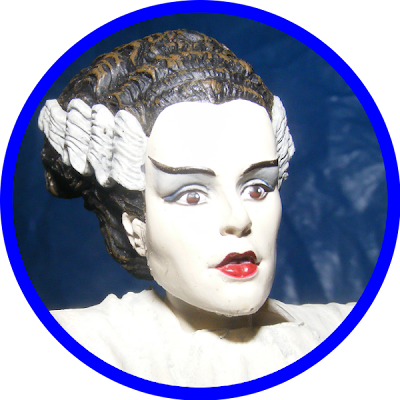 
For my fourth toy review of the Countdown to Halloween, I'm returning once again to Diamond Select's Universal Monsters Select Action Figure series, this time for their Bride of Frankenstein figure.

The packaging looks very nice.  It has a black and blue stormy background with flashing lightning, a silver foil Universal Studios Monsters logo with a picture of Frankenstein's Monster on it, and a some spooky lettering.  It does a great job of evoking that classic Gothic Horror feeling.  Once you open the package up, it's a different story.  It took me about 8 minutes of messing with all the tape and twist ties to get the figure out of the package.  The twist ties were wound up extremely tight.  When I finally got the tie unwound on her head, the head fell off!  I think the tie was on there so tight it snapped her head off!  Even if the twist tie was not responsible for breaking the head, I didn't need to spend 8 minutes trying to take the figure out of the package.

This is a really nice looking sculpt.  The likeness of the head sculpt to Elsa Lanchester is very strong, although it is not perfect.  The Sideshow Toys version I reviewed a couple of days ago did a better job with their head sculpt.  But this figure beats out the Sideshow version on the sculpt for the rest of the figure.  The bandages on her arms are very nicely defined.  Her dress is also sculpted very well.  When I saw photographs of the figure, I thought her dress was made of cloth, but instead it is a thin, flexible sculpted plastic.  All in all, it's a great looking figure.

The figure is balanced nicely, and stands up very well on it's own.  It has articulation at the wrists, shoulders, and head.  The wrists look very ugly when you turn them though, as there is a noticeable gap between the hands and the arms, so you pretty much want to turn them to a position where it is least noticeable and leave it there.  Even if you disregard the way the wrists look, there are a very limited number of poses you can make with this figure.  When I was posing her for my photos, I lifted her left arm up, so that her hand was at about her eye level, and put the chain from her base in her hand as if she was pulling on it.  This didn't seem like it was causing any strain, but when I stepped back to take a picture, her arm fell off!  I was able to snap it back into place, but I was not impressed.  Like the other Diamond Select Universal Monsters action figures I have reviewed, this is more like a plastic statue to sit on your shelf than it is a true toy.

This figure comes with a base with a couple of, I don't know, electrodes(?) or something, with chains on them.  It does look cool, like something from Frankenstein's lab, even if I don't know what it's supposed to be.  The Bride doesn't need the base to stand, but it does add to the ambiance if you want to display her on a shelf.

The Bride of Frankenstein is one of my favorite movie monsters, but she doesn't get as much love as the other movie monsters do, so it's extra cool to see a neat looking toy made out of her.

I bought this toy on auction at eBay for $38.00, including shipping.  That's about twice as much as I would have paid if had bought it at retail just a year ago.  So this seems like a bad deal, but I've been trying to buy one of these for months, and this is the cheapest I was able to get.  They hardly ever show up for sale, and when they do, they are usually in the 50 to 80 dollar range.  But then of course, when I opened it up, the figure was broken (this was not the seller's fault, though, it looked great in the package).  So, I've got mixed feelings about the value, and I've decided to give it a low grade of "2."  If I had paid retail price for this, and it was not broken, I would have rated the value higher, probably a "4."

Posted by Joshua Raymond at 1:23 PM