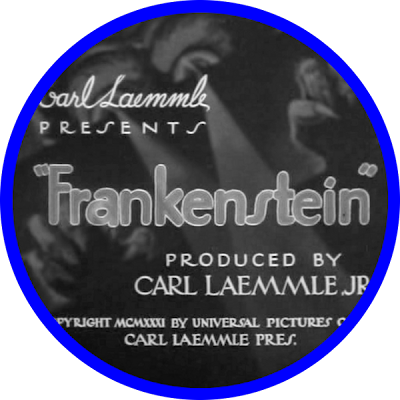 As the 1931 Universal Monsters classic Frankenstein begins, we are introduced to Henry Frankenstein (Colin Clive) as he lurks in a graveyard with his hunchbacked lab assistant Fritz (Fritz is played by Dwight Frye, who portrayed the fly-eating vampire's assistant Renfield a year earlier in Universal's Dracula).  The duo spy on a funeral, waiting for the mourners to leave so they can dig up the corpse.  Fritz is perversely eager and has to be held back by Frankenstein to avoid detection.  Fritz is possibly not the ideal man to be a scientist's assistant, but I suppose when your job duties include grave robbing, the list of eligible candidates for the position is not very large.  Frankenstein is quite eager himself, however, just in a quieter, more intense way.

Continue reading after the jump...

Later we meet Henry's fiancee Elizabeth, their friend Victor, and his former teacher, Dr. Waldman.  We learn that Henry was once a promising medical student, from a prominent and wealthy family and with a beautiful bride-to-be waiting to be married to him, but he has given it all up to devote his time to his obsessive scientific research  Henry now resides with Fritz in an isolated watchtower, where he can conduct his experiments away from prying eyes.

The trio of Henry's friends travel to the watchtower where they hope to reason with Henry and bring him back to his former life.  They arrive just in time to view the culmination of Henry's experiments.  Frankenstein has become obsessed with the idea of creating life from death, and has been scouring the countryside for body parts which he has been piecing together to create a patchwork corpse which he intends to imbue with life.  The trio watch as Henry operates the machinery in his lab, harnessing the power of the lightning from the storm that rages outside the watchtower.  The patchwork corpse starts to move it's hand!  "It's alive!  It's alive," cackles Frankenstein, "now I know what it feels like to be God!"

Now that he has created life however, Henry Frankenstein seems to be intent on being smug and self-congratulatory on having pierced the veil between life and death, and doesn't appear to having given any thought on what to do with his creation.  The creature starts off docile and childlike, obeying Frankenstein's commands and looking to him for guidance, although he doesn't really receive any.  Henry doesn't seem to regard him as a human being, but more like an interesting novelty.  The creature reacts violently when it is frightened by Fritz with a torch, and rather than soothe the creature or treat him with sympathy and understanding, Frankenstein responds by chaining him up in his cellar.

Fritz, meanwhile seems to delight on finding someone more grotesque than he is, and torments the creature at every opportunity.  Eventually, the creature fights back, killing Fritz.  After a furious struggle Frankenstein and Dr. Waldman tranquilize the creature.  Frankenstein now views his experiment as a hideous mistake, and decides to end his research and return home to Elizabeth.  He leaves Dr. Waldman behind to collect his research, and euthanize and dissect the creature.  Unfortunately for Dr Waldman, the creature wakes up on the autopsy table and strangles the doctor.  The creature then leaves the watchtower and begins wandering through the surrounding countryside.

On Henry and Elizabeth's wedding day, everything comes to a head.  The creature encounters a little girl playing in the woods who is not afraid of him, and for the first and only time in the movie, the creature smiles and is happy, as the two of them take turns tossing flowers in the lake and watching them float like boats.  When they run out of flowers, the creatures damaged mind decides it will be fun to throw the girl in the lake and watch her float like the flowers.  But the poor girl drowns, and the creature is frightened and horrified as he realized what he has done.

The creature then makes his way to the town, where he enters the Frankenstein mansion, and angrily menaces Elizabeth in her bridal chamber.  The camera cuts away before we can see what he does to her, but when we next see her she is sprawled out unconscious on the bed, possibly implying that the creature raped her.  At the same time the father of Maria, the little girl who the creature drowned in the lake, enters the town carrying the body of his daughter.


The news of the murder and attack enrages the townspeople, and soon a torch-bearing mob is formed to search out and destroy the murderer.  Henry Frankenstein himself leads one of the groups, although he is probably alone in knowing the true nature of the killer.  Eventually, Frankenstein gets separated from the rest of his party, and ends up coming face to face with his creation alone.  The two face each other, each one glowering with hatred for the other.


Frankenstein attempts to menace the creature with a torch, as Fritz once did, but the creature's hatred for Frankenstein overpowers his fear of fire, and he overpowers the man and carries him away to a nearby windmill.  However, the windmill is soon surrounded by the torch-bearing mob.  He desperately travels up the stairs floor by floor, but he eventually reaches the top, leaving the creature with nowhere else to go.  Unable to escape, he attempts to kill Frankenstein by throwing him to the ground below, but Frankenstein's fall is broken by one of the rotating blades of the windmill and he survives.


The angry mob then sets their torches to the windmill, and the entire windmill catches fire, as the creature is destroyed by his greatest fear as he is consumed by flames.  Thus ends one of the greatest horror movies of all time, and with the destruction of the creature, it can be assured that there won't be any sequels (I could be wrong about this).


Director James Whale did a fantastic job of directing Frankenstein.  It was the second Universal Monsters horror film, preceded by Dracula a year earlier.  Both films were originally based on stage plays, but Dracula LOOKS like a play, like someone just plopped a camera in front of the stage at the theater and started rolling the film.  I think Dracula is still a worthwhile film to watch, mainly for Bela Lugosi's performance, but it seems really dated, and can be a chore to sit through.  Frankenstein, however has held up remarkably well over the years, and, aside from a few clunky dialogue scenes, does not seem dated.


There are many other wonderful elements to this film:  The fantastic German Expressionist style sets.  Colin Clive's manic, slightly over-the-top performance as the obsessed Henry Frankenstein.  Dwight Frye's perversely creeptastic performance as Fritz. The creative cinematography of Arthur Edeson, who later went on to photograph the Maltese Falcon and Casablanca, among others.

What really makes this film a classic, though, is Boris Karloff's performance as Frankenstein's Monster.  On paper, this creature is little more than a lumbering brute and killer.  They even make a point of the creature being given and "abnormal" brain from a violent criminal.  But Karloff, through his body language, hand gestures, and a few moans and grunts manages to convey so much humanity that the audience can't help but feel sympathy for his character.  In Karloff's hands, this hideous creature comes across as a confused and frightened child, and the eventual hatred he comes to feel for his "father" Frankenstein, who turned him in to a monster, and then abandons him, is completely understandable.

Prior to this film, Karloff was a bit player in Hollywood, appearing in over 70 films before Frankenstein made him a star.  After this he worked steadily in starring roles in film and television, and became known as the greatest horror movie star of all time.  This film, along with Universal's Dracula a year earlier, launched a new era of massively popular horror movies from Universal featuring characters like Dracula, Frankenstein, The Invisible Man, The Mummy, and The Wolf-Man.  These films were excellent throughout the 1930s, but eventually degenerated into parody in the 1940s, culminated in a series of absolutely wretched Abott & Costello "comedies."

The version of Frankenstein's Monster that appeared in this film over 80 years ago, has gone on to become the quintessential symbol of horror movie monsters and Halloween,  appearing in numerous pop culture incarnations ever since.