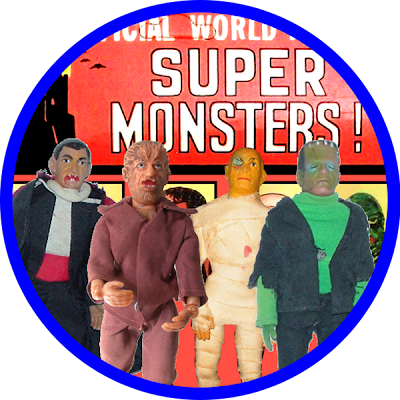 COUNTDOWN TO HALLOWEEN 2012
HAUNTED TOYBOX
DAY 19 - 12 DAYS TILL HALLOWEEN
I hope your ready for another plastic-molded dose of creepy, Frankensteiny ghoulishness, becuase it's time for part two of...

6.  AHI's Official World Famous Super Monsters
These are the third group of Mego-style monster dolls on this list: AHI's Official World Famous Super Monsters.  AHI were probably number two behind Mego for these type of figures in the '70s, and these figures are of a much higher quality than the Lincoln International Monsters from earlier on this list.  AHI also managed to outbid Mego for the Universal Monster license with these toys, so they are all "official" depictions of the monsters from the movies, not off-model generic ones.  This didn't stop AHI from imitating Mego, though, as their "Offical World Famous Super Monsters" logo is a pretty shameless rip-off of Mego's "World's Greatest Superheroes" logo.  I guess they were hoping to confuse the two lines in the minds of kids, so that some of Mego's success would rub off on them.  They also ripped of the artwork from the Aurora model kits for the artwork on the back of their cards.  All of which, of course, adds to the fun.

Being officially licensed products, the likenesses of the sculpts are pretty good.  This is especially true of their Frankenstein figure, which looks more like Boris Karloff than any of the other Mego-style Frankenstein dolls of this era.  Other characters in the line were The Mummy, Count Dracula, Wolfman, and Creature from the Black Lagoon.


5.  Aurora Monster Model Kits
Aurora Monster Model Kits are perhaps the most well loved and influential of all the monster toys.  Thanks to television reruns in the late '50s and early '60s, as well as the popularity of the magazine "Famous Monsters of Filmland," the classic Universal Monster movies were being exposed to a whole new generation of fans, and monsters in general were becoming more and more ubiquitous in pop culture.  In 1961, the Aurora Plastics Company decided to cash in on this trend in by offering a model kit of Frankenstien's Monster, and it was a "monstrous" success.  This kit was soon followed by a dozen more kits featuring characters like Dracula, the Wolf-Man, The Bride of Frankenstein, Godzilla, and more.

Aurora models are probably the most "classic" of all the monster toys, and it seems like most of the monster toys that came afterward drew inspiration from them, many of them openly aping the looks of the models, or copying the artwork on the boxes.  The Aurora model kits were issued and reissued in various forms throughout the 1960s, '70s, and '80s, and reproductions of many of the kits are still available today.


4.  Marx Toys Cinema Creatures
The Marx Toys Cinema Creatures were the monster toys that practically every boy in the sixties played with, as they were cheap, durable, and a lot of fun. They were the first ever line of Universal Monster action figures. They were like the little green army men many of us had as kids, but oversized, and in the shape of various monsters.  Even though they only came in two colors, blue and orange, the sculpts were fantastic, and they look great.  Over the years these toys have been bootlegged and reissued in other colors, including glow-in-the dark versions.  While these may seem simplistic to modern eyes, these were fantastically exciting toys in the 1960's.

In addition to Frankenstein's Monster, Marx also made figures of the creature from the Black Lagoon, Wolf-Man, the Mummy, Dracula, the Phantom of the Opera, and the Hunchback of Notre Dame.