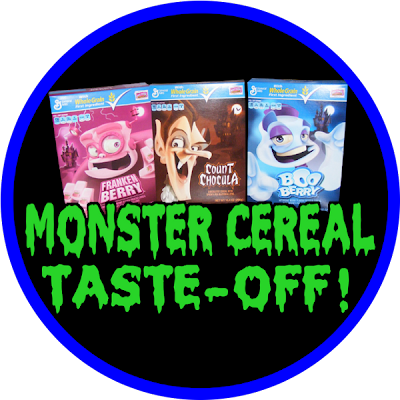 COUNTDOWN TO HALLOWEEN 2012
DAY 29 - 2 DAYS TILL HALLOWEEN
Monster Cereal Taste-Off!
I was pretty excited when I was grocery shopping the other day and saw some Monster Cereal for sale, just in time for Halloween.  "Yes!," I Thought to myself, "I love that stuff!"

Or do I?  Because now that I think of it, I don't remember eating it much when I was a kid.  It was always only available for a limited time around Halloween, and we hardly ever bought it.  I know I had it a few times, though, but I don't remember what it tasted like.  But that's good, that means I can evaluate the taste for what it is, and not have to compare it to my childhood memories, which would probably make it out to be better than it really was.

Monster Cereal Review:
First off, I'd like to talk about the box art.  Honestly it's pretty lame.  They really should go with something more retro, the old boxes were more fun.  These new ones look kind of generic, and the characters are done in the same color as the backgrounds, so they don't "pop" they way they should.  The new boxes have a comic on the back, which is a nice touch, but it's the same comic on all three boxes.  It would have been cooler if they had an individual one for each character.

They also gave Boo Berry a bizarro "skin flap" inside his mouth.  Apparently the "artist" who copied this from a previous design did not understand what he or she was looking at, and thought the side of his cheek was a flap of skin in his mouth. And apparently, this has been like this for at least TWO YEARS, as I found a post on BoingBoing about it from 2010, and nobody at General Mills has noticed or fixed it.  Or more likely, they just don't care.  If they did, they probably wouldn't have such crappy art on their cereal boxes to begin with.

Of course, the main reason to buy cereal is not to look at the art on the box, it's to eat it.  So how do they taste?

It kind of tastes like strawberries, but overall the flavor was pretty weak.  The cereal didn't get soggy, but it was somewhat soft, not very crunchy.  Overall, I'm unimpressed.


This seemed a touch sweeter than the Franken Berry, but with only a vaguely berry-like flavor.  It reminds me of Cap'n Crunch Crunchberries a little bit, but not nearly as tasty.  The same texture as the Franken Berry.  Another dud.

Count Chocula
This has the same, bland texture as the other two cereals.  The flavor is a little better, it tastes mildly chocolatey.  But my favorite part of the cereal was drinking the milk that was left over in the bowl, which had a hint of chocolate milk flavor to it.  This was my favorite of the three cereals, but I didn't actually like it.

Bottom Line
I won't have to buy this stuff again next year, as these same three boxes will probably still be sitting on my shelf, as I have no plans on eating any more of this stuff.

Email ThisBlogThis!Share to TwitterShare to FacebookShare to Pinterest
Labels: Countdown to Halloween 2012, Foodstuffs