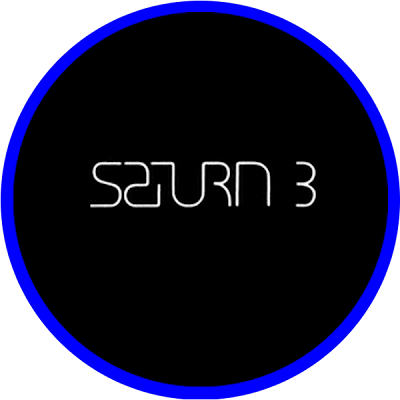 
Saturn 3 is not a good movie.   In fact, I found it frequently boring.  But there are still enough strange and interesting aspects of the movie that I can partially recommend it, especially to fans of bad, grade-b sci-fi or horror films.


The most notable aspect of the film is the cast.  Saturn 3 stars Kirk Douglas, Harvey Keitel and Farah Fawcett, and it's hard to imagine a more mismatched trio then these three.  Farah Fawcett's "acting" technique in this film seems to be composed entirely of staring into space and looking confused.  Harvey Keitel is the best actor of the group, playing someone who appears to very calm and controlled on the outside, but inside is seething with paranoia and anger.  It's probably a very good performance, although it's kind of hard to tell, as the producers of the film made the bizarre choice to overdub his voice with that of a British actor.  Maybe that could have slipped by in 1980, when Keitel was not yet a star, but to a modern audience familiar with the actor, it just seems completely distracting and out of place.


Kirk Douglas seems content a ham it up at every turn, as if he took acting lessons by watching a marathon of Looney Tunes.   But when he's not acting goofy, he seems to be trying to prove he is still a virile macho man, even in his old age.  There is gratuitous jump-roping scene, which seems to be in there for no other reason than to say, "Look at me, I'm an old man and I can still jump rope!"  He also has several nude scenes that show off his physique, including a psychotronic nude wrestling match with Harvey Keitel.  Honestly, if there had to be nude scenes in this film, I would have preferred them to star Farah Fawcett, and not a man old enough to be her grandfather.  And, I would think that would be the more commercial choice as well.  My best guess is that Douglas had "something to prove," and forced these scenes into the film.  It does make the movie very weird and memorable, though, I'll give it that.

In the film Kirk Douglas plays a very old man, and Farah Fawcett plays a very young woman, who live together in romantic bliss on an isolated research station on one of Saturn's moons.  Farah Fawcett's character grew up in space and has never been to Earth, and is apparently so naive that she doesn't realize that her sexual relationship with some old grandpappy is kind of creepy.  It kind of reminds me of the young girls that are raised on fundamentalist Mormon polygamist compounds (note: all of my knowledge of "fundamentalist Mormon polygamist compounds" has been gained by watching episodes of "Big Love," and thus may not be entirely accurate).  I'm sure that was not the filmmakers intent, as they seem to go to great lengths to show how healthy and normal the pair are.  Still, there is a voice in the back of my head that's just not buying it.

Kirk and Farah's peaceful life is interrupted by the addition of a third resident of their station, played by Harvey Keitel.  Keitel is supposedly a roboticist, there to build them a robot to aid in their research.  What our happy couple don't know, however, is that Keitel is actually a crazy creepo, who murdered the real roboticist and took his place.  There is a scene early on the film where Harvey meets Farah's cute pet puppy dog for the first time, and proceeds to pick the dog up and examine the dog's butthole on camera.  It's a helpful reminder that he is still a weirdo, in case the audience forgot that they watched him kill a dude a few minutes earlier.  Farah, as usual, reacts to this by looking a little confused.  A part of me wonders if she was even acting in this film.  I can easily picture a scenario where they just stuck her on a set with Harvey Keitel and Kirk Douglas acting like weirdos, and just filmed the baffled expressions that would naturally occur on her face.


The fun twist in this film is that the roboticists program robots by importing their own brain patterns into the machines, and thus must be carefully selected to make sure they are psychologically fit.  But since Harvey Keitel is a crazy coo-coo puff, the robot he makes turns into a crazed killing machine that wants to have robot sex with Farah Fawcett.  It's basically a variation on the "abnormal brain" scenario from Frankenstein.

Fair warning to anyone who is reading this, though: this review probably makes the film seem a lot better than it really is.  Aside from some cool looking art direction on the sets, and the handful of really crazy moments I have written about, this film was for the most part very boring.  I'm enjoying it  much more now, thinking back on all of it's weirdness, than I did when I was actually watching it.  So don't blame me for any damage to your brain that you may receive if you decide to watch it for yourself.

More screencaps after the jump!...