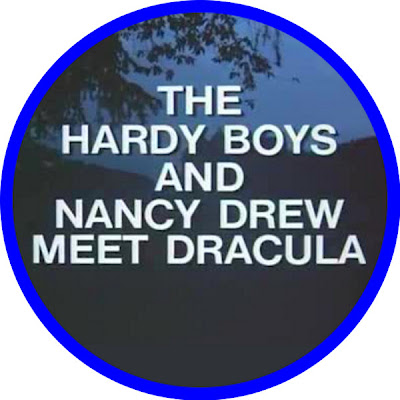 
Frank and Joe Hardy travel to Europe to look for their missing father, and find themselves going undercover as rock singers performing at The Castle Dracula in Transylvania in order to crack the case!  Now, this isn't actually a movie, it's a two part TV episode, episodes one and two of season two of the Hardy Boys / Nancy Drew Mysteries, to be precise.  But at 1 hour and 30 minutes, it is movie length.

Review of Part One:
This episode starts off right, with the Hardy Boys' Father, Fenton Hardy getting cold-cocked by someone in Castle Dracula.  We don't see the perpetrator, but he is totally wearing DRACULA BOOTS, so it must be Dracula.  Throughout this episode, they constantly cut away to some dude lurking around, but all we see of him are his Dracula Boots and his Dracula Ring.  So awesome!  I guess it's curious why Dracula hit him in the head, instead of biting his neck, but I suppose we'll find out the truth eventually.
After this, the episode is chock full of Hardy Boys goodness.  The Hardy Boys visit a morgue!  The Hardy Boys go undercover in a rock band!  They find some clues!  They meet a "hilarious" Nazi bellhop!  They meet Nancy Drew for the first time!  Paul Williams makes a guest appearance, and sings one of his songs from Phantom of the Paradise!  Heck, they even let Shaun Cassidy sing a song!  They mercifully cut that song short!  And throughout the episode, there are constant cutaways to DRACULA BOOTS!  Perhaps you don't share my enthusiasm for these things, and if so, I don't know what to tell you.  I freaking loved this show when I was a little kid, and I'm kind of flabbergasted to discover how much I still love it as a decrepit old man.It is SO AWESOME!


The episode ends with Frank Hardy leaning over a body with vampire bites in it's neck, just as Nancy Drew makes the scene, making it look to Nancy like Frank bit the dude.  Holy Hardy Boys Cliffhanger, Batman!  I don't know how I'm going to wait a week for part two... oh wait, it's 2012, I don't have to!

Review of Part Two:
Episode two doesn't quite hit the highs of episode one, as a lot of it just kind of repeats what we've already seen, but it's still pretty good.  There are more musical numbers, more vampire bites, and more exploration of the creepy castle, and more, more, more close-ups of Dracula Boots.


The highlight of this one for me was when Nancy and the Boys get into a fight with a bat, and completely smash up their hotel room in the process by throwing furniture at it.  Another great scene is where Nancy Drew appears behind a villain and yells "stop," which causes him to spin around, flail his arms about, lose balance, and fall down a trap door.  There's also a scene with an angry mob of torch-bearing villagers, which no horror movie is truly complete without, as well as visit to a Transylvanian monastery.


The final scene takes place inside Dracula's tomb, where we learn, of course, that there really is no vampire, and the man in the Dracula Boots is finally revealed.  However when the police are hauling the criminal away, there is a crazy twist!  Is he really a vampire after all?  As he says as they arrest him, "stranger things have happened."

Final Thoughts:
Wowie Zowie, the Hardy Boys are great!  When I was a kid, these guys we're second only to Batman and Robin in the category of "Crime-Fighting Duos."  But a lot of shows or movies that I loved as a kid, when I try to watch them as an adult, I find that they are actually really cheesy and kind of boring.  The Hardy Boys Mysteries still make for really solid entertainment, though.  Sure, the music and fashion are incredibly out of date, but producer Glen A. Larson really knew how to put together a "formula" TV series like this, with the kind of stories that stand the test of time.  This is the kind of show I would like to watch with my kids, to show them the kind of stuff I was into when I was their age... if I wasn't a single guy that's never had any kids, that is.


Paul Williams - Hell of It


Special thanks to Caffeinated Joe for embedding these videos on his blog, without which I wouldn't have known this was online.

Also thanks to YouTube user NancyHardy, for putting this online in the first place!