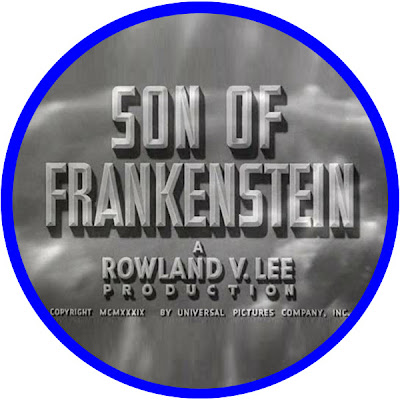 Son of Frankenstein is an interesting entry in the history of the Universal Monsters series.  This is the third Universal Frankenstein film, following 1931's Frankenstein, and 1935's The Bride of Frankenstein.  It is the first Frankenstein film not to be directed by James Whale, and it is the last one to feature Boris Karloff as The Monster.  It is also the last of Universal's big budget monster movies.  After this film, the rest of the series was produced as low-budget, "b-pictures," re-using sets, special effects, and actors from picture to picture.
This is a solid, if a little unoriginal, picture in the series.  the plot features Basil Rathbone as "Dr. Wolf von Frankenstein," the son of Colin Clive's "Henry Frankenstein" from the previous movies.  He returns to his ancestral home, after a long period of absence, with his wife and young son, hoping to rehabilitate his family name.  There he discovers the body of his father's Monster, in a coma, but with the heart still beating.  he continues his father's experiments in order to revive the creature and show the world that his father was a genius, not a madman.  As to be expected, this ends up with horrific results, as things get out of the doctor's control, and the awakened Monster goes on a killing spree, with the aid of his demented sidekick Ygor (played by Bela Lugosi).   In the climactic scene, The Monster is finally destroyed by being knocked into a pit of boiling sulfur.   After The Monster's death we are then treated to a brief and inexplicable tacked-on happy ending featuring Wolf von Frankenstein and his family.  Thus ends one of the greatest horror movie series of all time, and with the destruction of the Monster, it can be assured that there won't be any more sequels (I could be wrong about this).
The Monster is not nearly as interesting this time around as he was in the previous two films.  He has lost the ability to speak, and he has lost most of his empathy as well.  There are a few, too-brief, scenes where The Monster shows flashes of emotion and humanity.  These include his reaction to seeing his reflection in the mirror, his anguish at the death of a friend, and his attitude towards Wolf von Frankenstein's young son. Unfortunately, he spends most of his time in the film either unconscious, or killing people at the bidding of Ygor, and generally comes across as a mindless servant and killing machine.  This, I think, was a mistake on the part of the filmmakers, as the ability to empathize with The Monster and his plight was the key to the success of this series, and the reason that Frankenstein's Monster has become such a beloved figure in pop culture.  You take that away, and you're left with just a generic boogeyman, no different than the monsters from any other horror films.  It doesn't surprise me that Boris Karloff did not want to return as The Monster again after this.
This is not to say that it's a bad movie.  It has some nice, shadowy, black and white cinematography, and the performances from Karloff, Rathbone, and Lugosi are all entertaining.  Even if it's all a bit on the generic side, it's still a lot of fun, as pretty much all of the 1930s Universal Monsters movies are.  I would definitely recommend this if you are a fan of these types of movies.