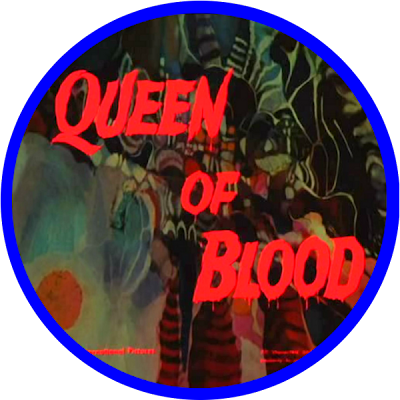 This 1966 Roger Corman produced sci-fi/horror concerns the first contact between Earth and an alien civilization, in the far off future of 1990.  The spacecraft carrying the alien ambassadors crash lands on the planet Mars, and the Earth's astronauts have to launch an emergency mission to Mars to look for survivors.  The first half of the film is a standard sci-fi movie about the astronauts efforts to move the timetable of their Mars program ahead of schedule to look for the alien survivors.  But the second half of the film changes gears to horror, as the earthmen rescue one female alien survivor, only to discover a horrible secret about the alien as they are trapped on their spaceship with her on their return trip to Earth.
The film has a good cast, including John Saxon, Basil Rathbone, and Dennis Hopper.  Dennis Hopper in particular is a pleasure to watch in his supporting role.  His loose, naturalistic acting style contrasts against the more stiff, action hero type acting from the rest of the cast.  He almost seems like a beatnik or oddball character compared to the other macho astronauts.   I only wish they would have given him more screentime, although he makes the best of what he has.
Also effective is European actress Florence Marly as the titular villainess.  With green skin, a bizarre brussels sprout looking hair-do, and a skintight bodysuit, the "Queen of Blood" is wonderfully wierd looking and alien.  She never speaks a word of dialogue, expressing everything with enigmatic facial expressions, which helps add to her creepy, otherworldly quality.

The film started life as spaceship footage Corman had purchased from several Soviet Union science fiction films from the 1950s. Writer/director Curtis Harrington then wrote a script to fit around this footage, and new scenes were shot quickly on a low budget, and spliced together with the Soviet footage to make a new movie. This film has a very off-kilter mix of beautiful sci-fi scenery from the Soviet films and corny dialogue scenes with the American actors.  The horror sequences, however, with the "Queen of Blood" stalking her prey, are really well shot and effective. Overall, the resulting film feels a bit disjointed and oddly paced, but is still quite enjoyable and worth watching overall.

Come back tomorrow when I'll be posting 64 swellegant screencaps from this film for Day 3 of Horror in Space!
Posted by Joshua Raymond at 12:00 AM