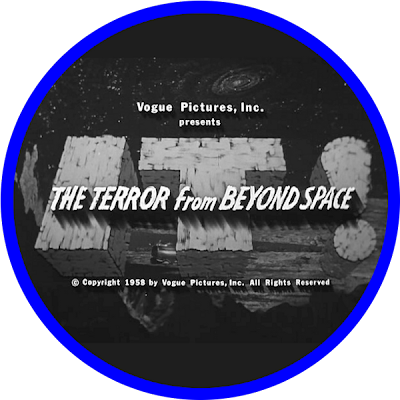 
It! The Terror from Beyond Space (1958) - Mini Movie Review plus Screencaps:

In the far-off future of 1973, the planet Earth has lost contact with it's first manned expedition to Mars.  A second expedition to Mars finds one lone survivor, with the rest of his crew dead.  His story of being attacked by a creature on Mars is not believed, he is accused of murder,and he is being brought back to Earth to face a court-martial and then the firing squad.  But then, the crew of the second ship starts being attacked, and they discover that the creature from Mars is real, and they are all trapped with it aboard their ship.
This is a fun little b-movie sci-fi monster pic.  It's nothing special, but it packs a lot of entertainment value into it's 1 hour and 9 minute running time.  It basically has one set, which it redresses with various accoutrements to make it look like multiple levels of a spaceship, but it does so effectively.  The monster is just a guy in a really cheesy rubber suit, and the exterior of the spaceship is an obvious scale model, but that's par for the course for b-movie 1950's sci-fi, and is kind of part of the fun.   It is mostly remembered today as a possible inspiration for the 1979 film Alien.