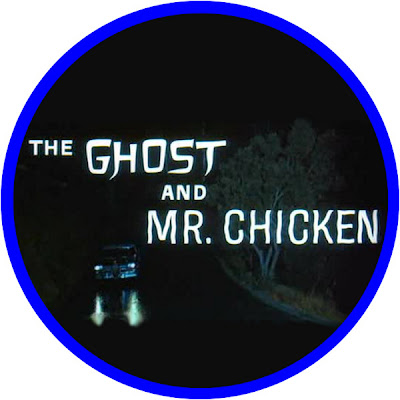 
The Ghost and Mr. Chicken (1966) - Movie review plus screencaps

HALLOWEEN TRICK OR TREAT!
As a special trick for the Halloween Countdown, I've inserted several FALSE screencaps into this review, that are not actually from The Ghost and Mr. Chicken.  As you read this review, see if you can figure out which screencaps are real, and which are the Halloween Tricks!


I just watched Don Knotts play an aspiring newspaper reporter, who has to spend the night in a haunted house, and finds himself entangled in a murder mystery, in this 1966 horror comedy from Universal.  You, know, I didn't have particularly high hopes for this movie, but I was hoping for something better than what I got.  This "horror comedy" really isn't funny or scary.  I didn't laugh once.  All the jokes were really stale, and they tended to repeat them over and over, as if they would somehow get funnier the second, third, fourth, or fifth time around.


The haunted house sequences were not especially scary, but they were kind of fun, in a Disney's Haunted Mansion sort of way.  But those sequences were far too brief, probably taking up no more than twenty minute or so of the film's 1 hour and 30 minute running time.  The rest of the sequences were just set around the town, as Don Knott's performed his usual schtick with the various townspeople.  Now, don't get me wrong, Don Knotts is a funny guy, but there's nothing in this film that we haven't seen him already do on the Andy Griffith Show, or any of his other movies or shows, and he usually does it with a lot more spark than we see him do it here.


This film does have a few minor points in it's favor.  As I mentioned, the haunted house sequences were fun.  And, the film has a really neat score by Vic Mizzy, who also composed the theme songs for the Addams Family and Green Acres, among others.   I also enjoyed the spooky fonts used in the opening credits.  But, you know when you have to talk about the fonts used in a movie, that you're really scraping the bottom of the barrel looking for something to praise.  I really can't recommend this film to anyone, unless maybe you're a die-hard fan of horror-comedies, but, even then, there are a ton of other movies you would probably want to watch first.


HALLOWEEN TRICK OR TREAT!
Were you able to figure out which screencaps were actually from the movie, and which were the Halloween Tricks? Let me know you're best guesses in the comments!