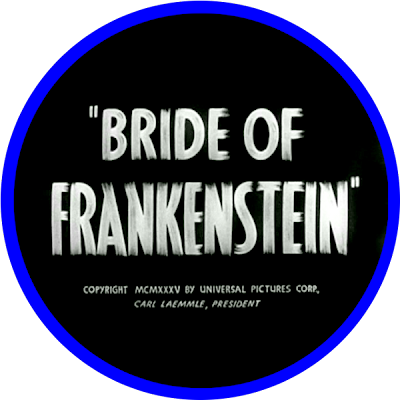 COUNTDOWN TO HALLOWEEN 2012
KARLOFF THE UNCANNY
DAY 11 - 20 DAYS TILL HALLOWEEN
The Bride of Frankenstein (1935) - Plot Summary and Movie Review:
(Read my review of 1931's Frankenstein here.)

After a brief introductory scene with Mary Shelley, Percy Shelly, and Lord Byron, The Bride of Frankenstein picks up at the burning windmill, more or less where the original left off... minus the tacked-on "happy ending" where Henry's Frankenstien's father Baron Frankentstein looks forward to Henry and Elizabeth getting married and having kids. In fact, it is mentioned that Henry is "Baron Farnkenstien" now, which implies that his father has died.  Perhaps Henry's father was killed by the Monster in this slightlty altered continuity.

Frankenstein's Monster is revealed to have survived the fire, and wanders the countryside looking for safe haven while being pursued by a posse of angry villagers.  Henry Frankenstein, meanwhile, atttempts to recover at home and put his life back together.  Henry's recovery is short lived, however, as he is soon approached by another mad scientist, a former teacher of his named "Doctor Pretorius."  Pretorius has also been engaged in experiments to create life, and wants to team up with Frankenstein to continue their experiments together.
During these early minutes of the film, we are also subjected to some awful "comedy" scenes featuring Frankenstein's maid Minnie.  While the previous film was played for straight horror, the sequel has many comedy bits as well.  Much of the comedy works well, especially the scenes of black comedy that take place in the graveyard, and those involving the gleefully perverse Dr. Pretorius.  The more broad, vaudeville style shenanigans of Minnie the maid, however, really fall flat, and tend to break the immersion in the story, and remind you that you are just watching a movie.
Despite Henry's strong desire to stay away from any more Mad Scientist shenanigans, he just can't help himself, and goes with Pretorius to see what he has been experimanting on.    This scene is so over-the-top it threatens to derail the film, as Pretorius shows Frankenstien his collection of miniature people he has grown from scratch, including a mini-king, mini-queen, mini-ballerina, a mini-pope, a mermaid, and even a miniature version of Satan.  The idea that Frankenstien could re-animate dead tissue is not so far removed from reality to be unbeleiveable, but this scene is just pure fantasy.  Like the previously mentioned comedy scenes, this scene draws attention to itself in a way that reminds you that you are just watching a movie.  This film has an odd blend of comedy, horror, fantasy, and violence, and I don't think it entirely blends together in a way that works, but it is still great fun to watch.
While this is going on the Monster has a few unpleasant encounters with people while on the run, but ultimately makes a friend in a lonely old blind man who lives alone in the woods.  The blind man can't see how hideous the Monster is, and is happy to take the Monster in to his home and befriend him.  The two live together happily for a time, and the man even teaches the Monster to speak a few words.  Their happiness is short-lived though, for soon the hunters who have been tracking the Monster discover him in the home and do battle with him, burning down the old man's house in the process.  The heartbroken Monster eventaully hides himself away in a crypt, where he "befriends" the corspes in their coffins, who of course will never reject him.
Frankenstein was disturbed by the Doctor pretorious's experiemtents and refused to help him, instead moving on with his life and marrying Elizabeth.  Without Frankenstein to aid him, Pretorius attempts to replicate his experiments with dead bodies on his own.  While robbing graves, Pretorius encounters the Monster and befriends him.  He decides to use the Monster against Frankenstien, and has him kidnap Elizabeth, and will only release her after Henry helps him build another Monster, a female companion for the monster.
The pair of scientists succeed in creating a woman, using body parts stitched together by Frankenstein, and with a brain grown in the lab by Pretorius.  The female creation is monstrous, yet eerily beautiful at the same time, and Pretorius dubs her "The Bride of Frankenstein."  The male Monster is pleased to finally have a companion like he is, but tragically, the Bride reacts with horror towards him, just as everyone else does.  Heartbroken, the Monster allows Henry to leave with Elizabeth, but traps Pretorius and the Bride with him in the lab.  In a rare moment of eloquence, the Monster proclaims, "We belong dead, " and he uses the machinery in the lab to destroy it and themselves. Thus ends one of the greatest horror movies of all time, and with the destruction of the Monster, it can be assured that there won't be any sequels (I could be wrong about this).
This film is widely considered to be the best of the Universal Monsters movies.  I think it's a bit uneven at times, but where it succeeds, it succeeds brilliantly.  I also admire it for trying to do so much, and not just settle for simple scares.