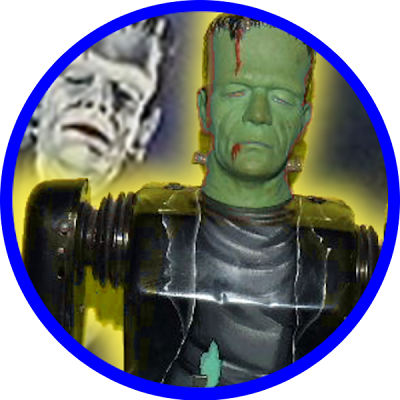 3.  Mego Mad Monsters
Several entries in this list have been of "Mego-style" monster dolls, and now it's time we get to the original line of toys by Mego themselves.  While the Marx Toys Cinema Creatures may have been the original line of monster action figures, they were all solid pieces of plastic, really more like plastic statues than what we think of as action figures today.  Originally issued in 1973, Mego's Mad Monsters was the first line of fully poseable monster action figures with moving body parts.  These are the toys that were later imitated by companies like Lincoln International, AHI, and others.

The line-up consisted of four figures: "The Monster Frankenstein,"  "The Dreadful Dracula,"  "The Human Wolfman," and "The Horrible Mummy."  While clearly inspired by the Universal Monsters, these were not officially licensed products, so they don't look exactly like their movie counterparts.  Instead, Mego went with a somewhat friendlier and cartoonier take on the monsters, while still trying to keep their monstrous appeal.  Mego also produced the "Mad Monster Castle,"  a fun vinyl castle playset for the monsters that featured a drawbridge, an operating table, and some neat mad scientist laboratory artwork.  These dolls were interchangeable with the other dolls that Mego produced, so if you wanted to have Robin Hood team up with Mr. Spock to fight Dracula, or dress up Frankenstein in a Superman costume, you could!

The Mad Monsters and the Mad Monster Castle are still available, in reissues from Classic TV Toys, click here to check them out.

To learn more about the Mad Monsters and other Mego toys, check out the Mego Museum at http://www.megomuseum.com/.


2. Remco Mini Monsters
For most of the 1970s, the action figure aisles of the toy store were dominated by Mego-style dolls in the 8 inch or larger range.  But, by the end of the decade, that all changed with the massive success of Kenner's 3 and 3/4 inch Star Wars action figures.  Out were the big doll figures with removable cloth outfits, and in were smaller, all plastic figures, along with their vehicles and playsets.  Remco and their parent company AHI had already issued two lines of Mego-style, officially licensed Universal Monsters figures.  In 1981, they responded to the changing times by coming out with a new line of plastic monster action figures in the 3 and 3/4 inch scale, dubbed "Mini Monsters."

The line-up of characters was the same as Remco's 9 inch monsters: Frankenstein's Monster, Dracula, the Mummy, the Wolfman, the Creature from the Black Lagoon, and the Phantom of the Opera.  The figures were first introduced in regular versions, and then later in glow-in-the-dark versions.  There was also a Mini Monsters scaled "Monsterizer" operating table, like the 9 inch line had.  Remco also produced a Mini Monster Playset, designed to look like a creepy dungeon with a sarcophagus, operating table, and mad scientist lab equipment.

This is a really fun group of figures, with great likenesses to the characters and actors from the movies.  While there's a lot of competition in the larger figures, these one have this size all to themselves.  But even if there were other figures in this scale from other companies, I think these ones would still come out on top.

But seriously folks, this toy is like a triple threat, appealing to collectors of tin toys, robots, and, of course, Frankenstein.  The robot actions include walking and grasping objects.  Plus, it appeared on an episode of the Munsters, where Herman mistakenly thinks that Lilly was pregnant, and that this toy is actually his new son!  With a pedigree like that, you'd expect this toy to be highly sought after by collectors, and you'd be right.  In fact, this might be the single most collectable Frankenstein toy of them all.   Depending on the condition, and whether it is loose, or in the box, you can expect to pay anywhere from $400 to $4000 for one of these!  That's pretty much out of my price range... but who knows, maybe I'll stumble onto one cheap at a thrift store or yard sale one day!  Sure, that's not very likely, but don't ask me to give up my dreams.

Closing Thoughts
Welp, that does it.  I hope you enjoyed my list of Frankenstein toys.  Here are some fun sites you can check out online if you want to learn more about vintage toys:

The Mego Museum
You can read about Mego's Mad Monsters, and all of the other cool toys Mego made that ruled the toy aisles in the '70s.

The Gallery of Monster Toys
A great site to learn about monster toys from the 1960's through the 1990s.

Ebay
So you can search for all the toys of yesteryear I mentioned in this list, and then wail in despair as you see how much they will cost to buy today.

Oh, and if you think there is some great Frankenstein toy or game that I overlooked, feel free to chime in in the comments!

Thanks for reading!
Your pal,
Joshua the Atomic Robot