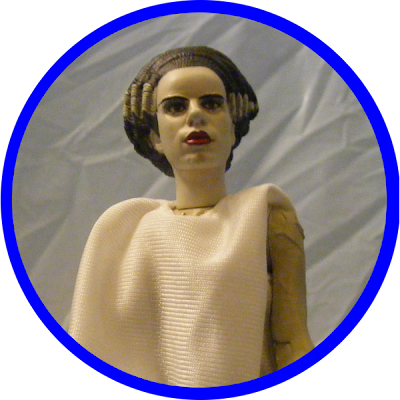 For my first two toy reviews for the Countdown to Halloween, I reviewed Diamond Select Toy's Universal Monsters Select Frankenstein and Universal Monsters Select The Mummy action figures.  For my third review, I'll be reviewing a similar toy from 1999: Sideshow Toy's The Bride of Frankenstein action figure, from the Sideshow toys Universal Action Figure line from the late 1990s and early 2000s.

I bought this figure used and loose, so I'm not going to rate the packaging.  I've included photos of the package I've found online.  I don't think the bright yellow and purple color scheme of the packaging really goes with the Universal Monsters very well.  I would have preferred to see something black or gray, with more of a gothic horror, and less of a cartoony feel.

Sideshow Toys did a great job of capturing Elsa Lanchester's likeness as the Bride.  The sculpt on her head is fantastic.  The paint job is really good, to, the fine lines of her lips and eyes are rendered flawlessly, and there are some subtle washes of paint on her face that help make her skin come alive (or reanimated, in this case).  One aspect of the paint job that's a little weird, though, was their decision to paint the dimple on her chin pink, this would have looked better as part of the sculpt, or at least painted on smaller and with more subtlety. Here bandaged body is fine, but the sculpt looks a little sloppy in comparison to the excellent sculpt of her head.

The action figure has plenty of articulation, at he shoulders, elbows, wrists, knees, hips, waist, and neck.  I think if she had  joints at her ankles, and ball joints at her shoulders so she could have moved her arms in more directions, she would have been about perfect.

The Bride of Frankenstein comes with a base she can stand on, which has a plaque and a electrode type thing attached to it.  She also has a removable dress, and a second head, so you can play with her fully bandaged, as she was on the operating table, or in her bridal gown after she has been brought to life.

This is a super cool figure, from one of the most classic monster movies of all time.  She looks just like Elsa Lanchester as the Bride of Frankenstein, and looks great paired up with my Sideshow Toys Boris Karloff Frankenstein figure (which I will be reviewing soon).

I paid $21.50 for this figure on eBay, including shipping.  Maybe a little high for a loose figure, but in all my previous attempts to buy one of these, I always got outbid in the last few seconds, so I'm satisfied with my purchase.