The Ghost in the Invisible Bikini (1966) 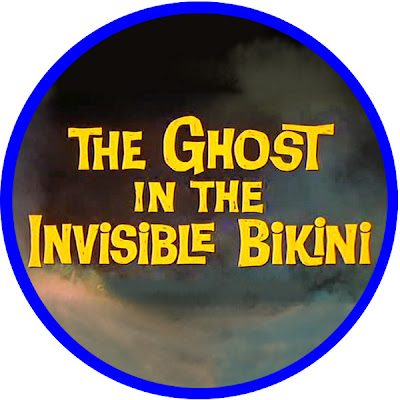 The Ghost in the Invisible Bikini (1966) - Movie review plus screencaps
The Ghost in the Invisible Bikini is the last film of AIP's "Beach Party" series.  At this point the Beach Party formula was getting pretty stale, and they had lost the stars of the previous films, Frankie Avalon and Annette Funicello, so the producers decided to shake things up by changing locations from the beach to a haunted house.  The result was a hybrid horror/teen musical/comedy flick that is pretty dumb, but still fairly entertaining.

One of the best elements of this film are the sets.  AIP was also producing a series of Edgar Allan Poe movies at the same time, and was able to reuse some of the same spooky sets for this film.  They even borrowed some footage from the film "The Haunted Palace" for the opening sequence.  This made for a comedy film that still has a lot of horror "atmosphere" to it.

The film features two veterans of classic horror in supporting roles.  Boris Karloff plays "The Corpse," a recently dead man who must perform one good deed to get to heaven.  For his good deed, he decides to make sure his estate goes to the heirs he has named in his will, and not his evil attorney, who he believes is going to try and swindle it all for himself.  Karloff was having chronic back problems at this point in his life, so all of his scenes were filmed on one set, where he spent almost all of the time sitting in a chair.  He was able to watch the rest of the characters through a crystal ball, and he could communicate with the titular Ghost in the Invisible Bikini though it. She would then influence the outside world to make sure his good deed was accomplished.  It's always nice to see Karloff on screen, but he really doesn't have much to do in this film.

Reginald Ripper, the evil attorney, is played by Basil Rathbone.  Rathbone's role is more substantial, and he actually gets to interact with the rest of the cast, unlike Karloff.  Rathbone plays things a little too straight in this film, for my taste.  The film's a comedy, so I would have like to see him ham it up a little more than he did, although I still enjoyed his performance.

Adding continuity to this film from the other Beach Party films is Harvey Lembeck as Eric Von Zipper, along with his biker gang, The Rat Pack.  Lembeck's shtick was getting a little tired after seven Beach Party flicks, but he is still fun to watch, and has the best jokes in the film.  Replacing Frankie Avalon and Annette Funicello are Tommy Kirk and Deborah Walley.  Walley is instantly forgettable, she made virtually no impression on me when I watched her on screen.  Tommy Kirk is incredibly bland and vanilla, and he and Walley have absolutlely no romantic chemistry.  If Frankie and Annette had stuck around, this would have been a pretty strong film, But Kirk and Walley really drag the film down, it's like there's a personality vacuum whenever they are on screen.

I guess that's a problem, when I can't help but imagine what the film would have been like with different actors and different songs.  But, on it's own, the film was still pretty entertaining.  I can recommend this film to fans of campy 1960s comedies, or horror fans who want some really light fare for a change of pace.

Posted by Joshua Raymond at 8:05 PM