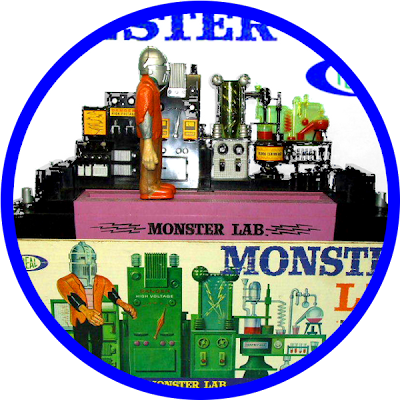 
Alright!  Buckle your seat belts, kiddies, because we're about to take a wild ride down Frankenstein road, and it's a twisty one on the side of a creepy mountain!  Boo-wah-hah-hah-ha!!  That was my evil laugh, by the way.

Today I'm treating you to the first part of my top 10 list of vintage Frankenstein toys from the 1960s, '70s, and '80s.  These are all toys that were inspired by or feature Frankenstien's Monster, either individually or as part of a line of toys that Frankenstein was a part of.  Numbers 10 through 7 will be featured today, then come back tomorrow and the next day, when I'll be finishing up with parts 6 through 1.

10.  Lincoln International Monsters
The Lincoln International Monsters are the first of several Mego-style "doll" action figures on this list.  Mego-style dolls (after the Mego toy company, which is famous for these types of figures) are kind of like Barbie dolls for boys, they wear cloth outfits that you can take off, or swap outfits between different characters.  This would probably seem weird to people from younger generations, but if you played with action figures in the 1960s and 1970s, like the original G.I. Joe, The Six Million Dollar Man, or Mego's World's Greatest Superheroes, these are what they were like.

The Lincoln International Monsters guys are kind of the cheapest and cheesiest looking ones of the bunch, basically generic knock-offs of the toys being made by better companies like Mego.  The artwork on their packages is really goofy, it almost looks like it was painted by a little kid.  On the original boxed version of Frankenstein's Monster, his name was misspelled as "Frankensten."  Lincoln International did not have the rights to use the actual likenesses of the Universal Monsters, so all of their characters are off-model just enough so they could avoid being sued.  The low-quality goofiness of these figures actually increases the appeal that these toys have for me.  I really think these figures are a lot of fun.

These line of toys featured the monsters "Wolfman," "Count Dracula," "Hunchback of Notre Dame," "Phantom of the Opera," "Mummy," and of course, our main man, "Frankenstein."  And, no, I'm not leaving off the word "the" from the beginnings of the Mummy, the Wolfman, etc...  Apparently Lincoln International was not a fan of that word, and did not include it at the beginning of any of their monster's names.

For more info about Lincoln International Monsters, check out lincolnmonsters.com.

The game play was fairly simplistic.  Players spin a spinner and move their game pieces around the board to various locations in a spooky town, such as The Cemetery, The Haunted House, The Tower, and The Lab, collecting cards with townspeople on them as you go.  If you collect the card with Frankenstein on it, you then try to make it to the lab to win the game, while avoiding being "challenged" by another player who suspects you of having the Frankenstein card.

The appeal of this game, and the other games in this series, isn't really the game play, it's the awesome monster artwork, combined with the spooky locations like the cemetery and the morgue.  I think if I had this game as a kid, all the scary scenarios I would think up in my head as I played it would help make this game into a spooky good time.

8.  Ideal's Monster Lab
This is a hellaciously cool looking game.  Against the backdrop of a big crazy looking Mad Scientist lab, a weird, helmeted monster, clearly inspired by Frankenstien's Creation, moves back and forth between two players.  The two players must take turns twisting a knob on their control to direct the monster away from them.  If the player fails to direct the monster away, the monster's helmet falls off, revealing his hideous green skull face, and the player loses the game!

This game looks really cool, but was supposedly not much fun to play.  The knob twisting didn't seem to do much, it seemed more of an act of chance than one of skill over who would win or lose the game.  Consequently, kids didn't like playing with it, and Ideal quickly ceased production on it.  Of course, these days, that scarcity makes it all the more valuable, and for a modern collector, who is probably going to display it, not play with it, it's great look overcomes what it lacks in game play.  Good luck on finding one for your toy collection, though, as these things now go for thousands of dollars at auction.

7. Remco 9 Inch Monsters
AHI had already produced an officially licensed line of Mego-style Universal Monster figures in the '70s, and they returned to that with their subsidiary company Remco in 1980, with this new line of deluxe, 9 inch monster figures.  The figures all have nice sculpts, and look closer to their movie counterparts then the "unofficial" monster figures from other toy companies.  Under their outfits, the toys had odd looking accordion style arms that would contract to "crush" their victims.  The figures also had glow-in-the-dark hands and faces.

A neat accesory was sold alongside these figures: The Monsterizer.  The Monsterizer was a Doctor Frankenstein style lab table upon which the monster figure could be placed upon.  The Monsterizer lit up and made weird noises.  In addition to just looking neat, the light would serve to "charge up" the glow-in the-dark features of the figures.

Besides Frankenstein's Monster, other characters that appeared in this line were, Dracula, The Mummy, The Wolfman, The Creature from the Black Lagoon, and the Phantom of the Opera.