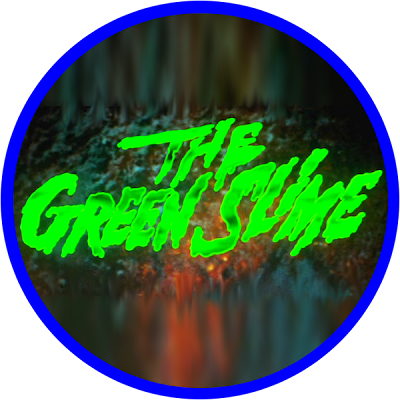 A space station is quickly being overrun by tentacle waving eyeball-aliens, in this gooftacular sci-fi monster movie from 1968.  While technically an American production from MGM, the film was actually shot at the studios of the Toei Company in Japan, and has all the hallmarks viewers have come to expect from 1960s Japanese monster movies, such as completely unconvincing scale models that look like toys, badly dubbed voices, and monsters that are just men in extremely silly looking rubber suits.  As such it is loads of fun.
The aliens in this movie are really weird, starting off as the titular green slime before quickly developing into tentacled rubber monsters with one giant eye, and hundreds of smaller eyes growing on their bodies, who make squeaky high-pitched sounds.  The first thing that came to mind when I saw them were the sea monsters from the old Sid & Marty Kroft show "Sigmund and the Sea Monsters."  They are just plain goofy looking, and not in the least bit scary, but that just adds to their charm.
The three main leads are fine in their respective roles.  The film stars Robert Horton, who was best known as one of the stars of the television series "Wagon Train" as Commander Jack Rankin, an arrogant, egocentric, but highly competent astronaut.  He butts heads with veteran television actor Richard Jaeckel as Commander Vince Elliott, leader of the space station Gamma 3.  In addition to jostling with each other over who is in command, they are also competing in a love triangle, Commander Elliot engaged to be married to Commander Rankin's former love Dr. Lisa Benson, played by Thunderball actress Luciana Paluzzi.  The back story between the three main characters is probably fleshed out more than a film like this really needs, but it does help to ratchet up the tension and drama in some scenes.

Overall, I was a little disappointed with the film, but that was mainly because I had too high a level of expectation.  I have often read about this film as a possible inspiration for the 1979 film Alien, but now that I've seen it, I think that is a bit of a stretch.  Yes, there are people trapped on a space station forced to fight with alien monsters, but I don't know if that's enough to really connect it to Alien, except in a superficial way.  There is nothing remotely similar in the tone of the two films.  Everything in Green Slime is brightly lit, colorful, and really not in the least bit scary.  In fact, I'm kind of regretting writing about this film as part of my "Horror in Space" series, becuase there is very little actual horror in it.  But taken on it's own terms, the film is fairly enetertaining, and I likely would have eagerly devoured it if I had seen it on TV when I was a kid.
As a final note, mention needs to be made of the completely ridiculous "Green Slime" theme song that plays during the opening and closing credits.  While the rest of the film uses typical sci-fi type music, the kind of stuff you might hear on an episode of Star Trek or what have you, the Green Slime theme song is a glaringly out of place 1968 slice of hippie rock that contratsts so badly with the rest of the film that it's impossible not to laugh at it.  Yet like the bad costumes, miniatures, and dubbing, the song is "so bad it's good" and in the end I think it helps kick the film up a notch in my enjoyment of it.