Packaging
The packaging on this toy is pretty much the same as it was on the Herman and Lilly figures, with a big photo on  the side, and plastic in the front.  This had a few frustrating twist ties, but it wasn't nearly as bad as the Lily figure was.  Some of the stuff in this one was held in with tape instead.


Grandpa's bio on the back of the box reads:

Sam Dracula, the famous Count Dracula of legend, is over 600 years old and personally knew King Arthur and Jack the Ripper.  He can still turn into a wolf or a bat... if he takes his pills.  He is a persistent inventor, having modified his own coffin into a race car, the "Drag-U-La".


Appearance(Sculpt/Paint/Likeness)
I really like the looks of this toy.  Like with the Lily figure, I don't know if it captures Al Lewis's face as strongly as it could.  The Herman Munster figure definitely has the best facial sculpt of the three.  It seems to me that the Grandpa facial sculpt looks better in real life than in my photos, though.  I think the photos tend to magnify the flaws.  But aside from the facial sculpt, I think his suit, cape, and accessories look fantastic. 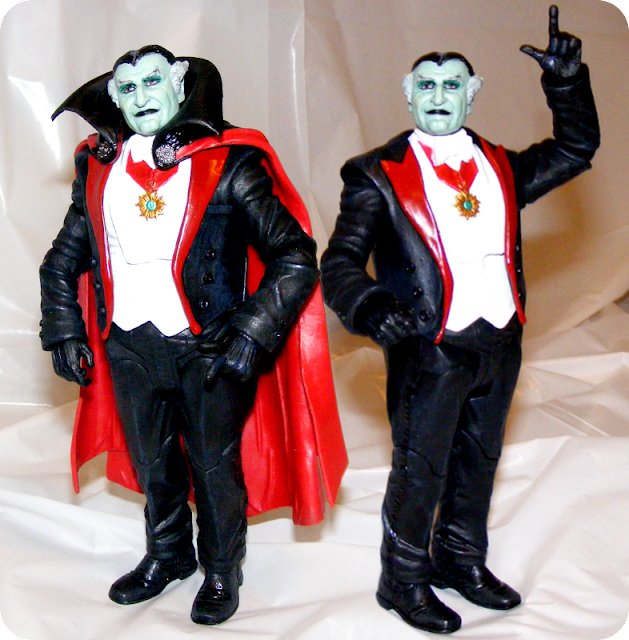 Articulation/Playability
The figure doesn't have as many points of articulation as most figures this size.  You can't really do much with his legs or head.  He does have some decent articulation in his arms, though, both at the shoulders and elbows, and he comes with two sets of hands.  As a result, you can make him gesticulate, point, and even smoke a cigar in a variety of interesting poses.


Accessories
Where this figure really shines is with all of his accessories.  He comes with a lab table and a variety of really awesome test tubes, beakers, and magic books to fill it up.  They look really cool, and they are all little individual pieces that you can move around and arrange as you see fit.  They really take this figure to another level.  I thought Herman and Lily's accessories were kind of lackluster and random (a lunch pail and a cuckoo clock), but Grandpa's accessories more than make up for it, plus they fit his character perfectly. 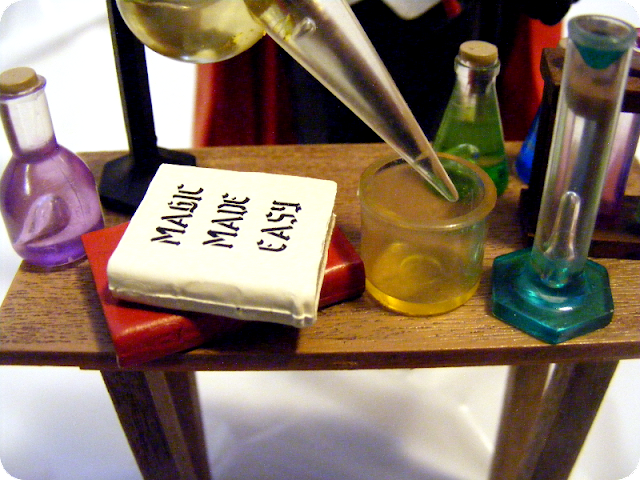 The lab equipment alone would have been plenty, but this figure also comes with a removable cloak, and a little bat that can perch on Grandpa's shoulder!  And it also comes with the rest of the pieces needed to build Herman's collect-and-connect electric chair.  The accessories with this figure a just fantastic.  I don't "rate" figures in my reviews anymore, but if I did, the accessories would have my highest score.

Final Thoughts
This is a really fun, good looking figure by itself, but the fantastic accessories take it to another level.  I'm a huge Frankenstein fan, so I thought that Herman Munster would be my favorite figure from this series, but after playing with Grandpa, I have to place this one on top.  Heck, even if you're not a Munsters fan, this figure pretty much worth just for the lab equipment alone, which would look good with any kind of mad scientist horror display for 6 or 7 inch action figures.  So, if you're even remotely interested, I'd recommend you pick one of these up while you still can.
Posted by Joshua Raymond at 1:32 AM