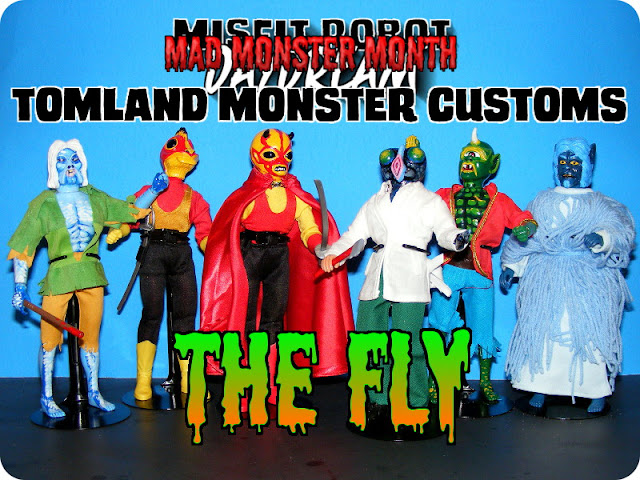 Since I wanted to review a bunch of Mego style cloth outfitted 8 inch action figures for the Countdown to Halloween, I looked in to buying some monster figures made by a company called Tomland, which made Mego style figures in the 1970s and 1980s.  But it turned out that those figures are expensive, like anywhere from $75 to $300 each, depending on how rare they are.  However, I saw that Dr. Mego's Repros had resin copies of some of the Tomland Monster heads for sale, so I thought it might be a fun project for Halloween to put together some custom versions of those monsters, using the heads from Dr. Mego as a starting point.  So I ordered the heads, and I got some other custom clothing and bodies from Classic TV Toys and the 8 Inch Superstore.  I made a total of six figures, which I'll showing on this blog off and on for the next couple of weeks.  First up: The Fly!


CLICK HERE to read about the original version of Tomland's The Fly.  For my version, I went with something a little closer to how The Fly looked in the 1958 movie.  That includes giving him a fire axe, as that was what The Fly used to smash up his lab equipment in the film.

If you haven't seen this yet, you should check it out, it's a 16mm horror promo film The Cramps shot for "Human Fly" in 1978 that recently surfaced on the internet.  The actual song doesn't kick in until a minute or two in to the film, so don't worry that your speakers are going out or something.

Posted by Joshua Raymond at 5:20 PM