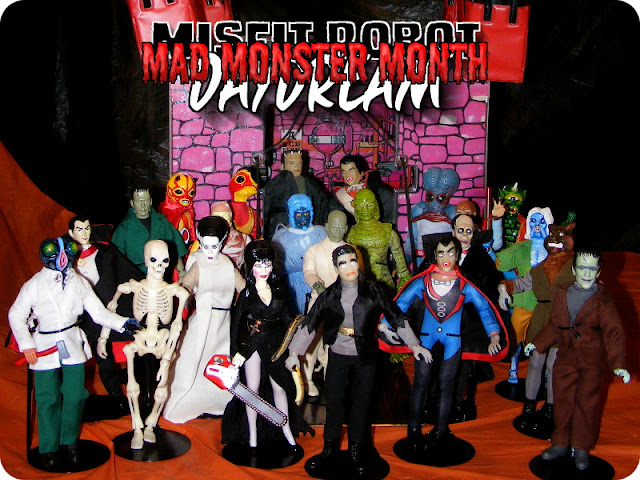 Happy Halloween, everybody.  For my final post for this year's Countdown to Halloween, I thought I'd take a group photograph all of the Mego style 8 inch cloth outfit monster figures I've been featuring this month.  Hopefully my collection will be even bigger next year! 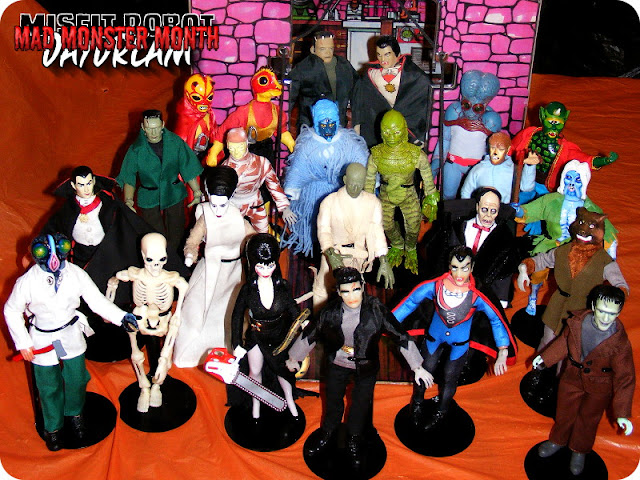 I hope everyone has enjoyed all the monster toys and movies I've reviewed this month.  Coming up in November, I've got a handful of horror movie reviews that I didn't have time to finish this month.  I pretty much blew my wad on monster toys, though, but I've got other fun action figures on tap like Flash Gordon, Batman, Garbage Pail Kids, The Venture Bros., and who knows what else, so there is some fun stuff to look forward to.

Then in December, I'm going to be posting a lot of creepy and weird Christmas stuff for this year's Creepmas.

But my really big plans are for 2016!  2016 is the 50th anniversary of 1966, which is my favorite year in pop culture.  1966 saw the premieres of some of my all-time favorite TV shows like Batman, Star Trek, and The Monkees, and there were all kinds of amazing books, movies, music, comics, and art that year.  So I'm going to be celebrating that in a BIG way.  I've got all kinds of features, big and small planned, and I'm going to be reviewing a ton of Star Trek and Batman '66 toys.  I've actually been working on this all year in 2015, I've already got a bunch of stuff written, so I know it's going to be awesome.    So stick around, Bat-Fans, the best is yet to come!

Posted by Joshua Raymond at 8:03 AM