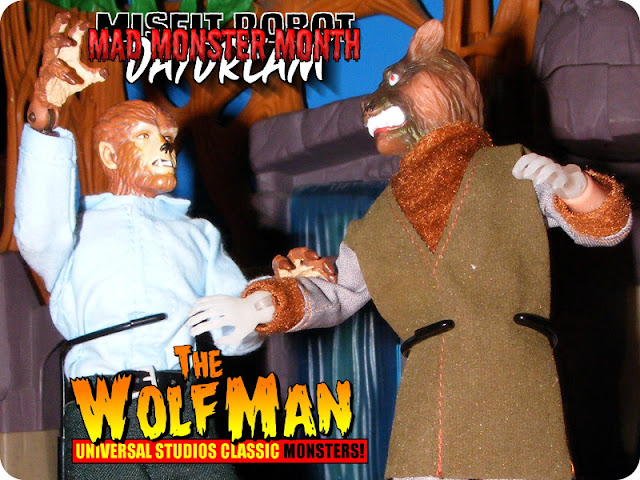 The Wolf Man was part of the first series of Diamond Select and Emce Toys Retro Cloth Universal Monsters figures, along with Frankenstein's Monster, released in 2010.  I bought this figure in a lot of loose action figures on Ebay, and it was missing it's original shirt and belt.  So the shirt and belt you see in the photos are actually replacements from CTVT, so bear that in mind when viewing the photos.  The original had a gray shirt that fit better and had buttons, and the belt had a more prominent buckle.  I've included a photo of the figure in it's proper outfit to the right.

This figure has a great sculpt.  The face does a great job of capturing the look of the Lon Chaney Wolf Man.  The figure also has some really gnarly feet and hands that really complete his look.  I also like the shredded pants, they highlight those great feet and bring a feral, savage look to the Wolf Man's human clothes.  I also really like the paint job, they added some yellow to the Wolf Man's face, which is a deviation from the all brown look from the original film, but it gives the face some much needed contrast, so I think it was the right choice to make.
BONUS!  MUSIC VIDEO:

Posted by Joshua Raymond at 5:27 AM