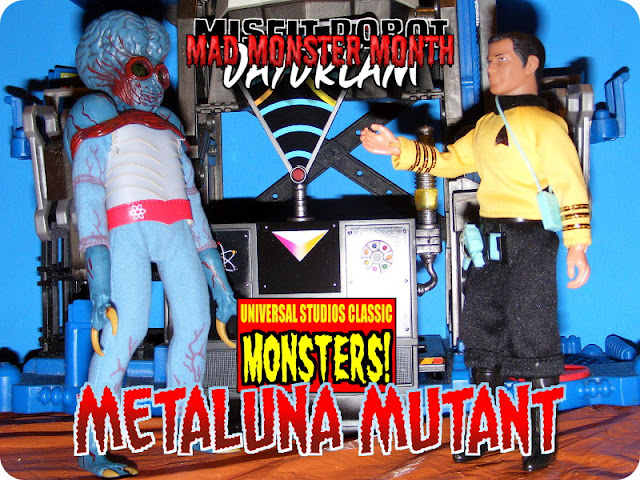 The Metaluna Mutant came out along with the Phantom of the Opera as the fourth and final wave of Universal Monsters Retro Cloth Figures by Diamond Select and Emce Toys.  This Universal Monster appeared in the 1955 Universal Pictures Sci-Fi film "This Island Earth."


One of the interesting aspects of this monster in the movie was that it was hard to tell where it's clothes ended and it's skin began.  It kind of looked like it was wearing trousers with veins on them.  So a Mego style cloth outfit works really well for it.  This figure has a really nice costume, as well as uniquely sculpted hands, feet, and head.  It's pretty darn cool looking.

There is one big flaw, though.  It's shoulder pads are sculpted out of hard plastic, and it severely limits the movement of it's shoulders.  It basically has it's arms stuck pointing straight down it's sides.  So bending the elbows and rotating the wrists are the only arm articulation, which is very limiting when posing the figure.  If you want to turn lemons in to lemonade, you can say that it's perpetually awkward arms give it an unnatural "alien" quality. Yeah, that's the ticket.

It's easy to look past the flaws when it has such a weird, cool design, though.  I'm just a sucker for any monster with big bulging exposed brains.  It's got that "Mars Attacks" factor to it.

Here's a song for all the "beautiful mutants" out there...
DEVO - R U Experienced?