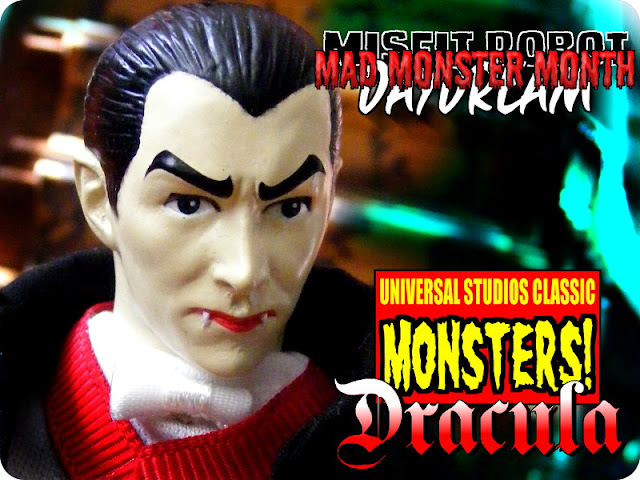 Beginning in 2010, Diamond Select began releasing retro cloth Universal Monsters figures in the vintage Mego style.  The figures were designed and sculpted by Emce Toys.  I'll be reviewing every figure from this line this month as part of "Mad Monster Month," and I'll begin with Dracula.  This Dracula was part of Series 2 of the Universal Monsters line, and was originally released in 2011.


It's a really nice looking figure, and is a more modern take on the old Mego style, while still retaining the vintage vibe.  The cloth outfit fits the character very well, as opposed to most vintage Mego type figures, which either tended to be overly baggy and loose looking, or skin tight with the details screen-printed on.  This figure has no screen-printed details, his vest and tie are made out of separate layers of cloth, and his medallion is made of plastic and cloth.  One fun tie-in to the original Mego Mad Monster Dracula are the shoes, which are identical.  Whether that was a deliberate homage, or just a cost-saving measure (why design new shoes when perfectly good ones already exist?), it works out great.

The sculpt is very nice, too.  Like virtually all official Dracula products, it does not feature Bela Lugosi's likeness.  It's my understanding that the Lugosi estate is very picky about granting a license to use Bela's likeness, so you can't blame Diamond Select or Emce toys for that.  But even though it doesn't look like Lugosi, it does capture that same suave, yet menacing European vibe that Lugosi had.  I think it's one of the best classic Dracula sculpts I've seen to capture the feel of Dracula without being able to look like Bela Lugosi.

Posted by Joshua Raymond at 2:13 AM