Frankenstein Meets the Wolf Man is the first Universal Horror movie to cross over monsters from one series with another.  It is the second film in the "Wolf Man" series and the fifth in the "Frankenstein" series.  This Universal Monster formula was getting a bit tired at this point... practically every film had the monster dying at the end, followed by a sequel in which it is revealed that the monster survived, only to die at the end of that film... rinse, lather, and repeat.

Let's take a quick look at the previous Frankenstein movies:
The Wolf Man died at the end of his first movie, too, after being beaten to death by his own father, but since the series had only produced one film at this point, he had not yet had a chance to be resurrected.  A series of movies in which the Wolf Man comes back to life, then gets killed, then comes back to life for the next, probably would have gotten old pretty fast.  But teaming him up with other monsters?  What a great way to bring new life to this dying formula.

There was only one problem, at this point in the production of Universal's horror movies,  Lon Chaney Jr. was the actor portraying both Frankenstein's Monster and the Wolf Man.  So what to do?

Originally, Universal wanted Chaney to play both characters in the same film, using stand-ins and stunt doubles for the scenes where he had to act against himself.  And really, since both the Wolf Man and The Monster involve such heavy prosthetic makeup, it wouldn't have been that hard to pull off.  But Chaney wasn't excited about the idea of doing so much work in once movie, and said if Universal wanted him to play two roles, they had to pay him double his usual salary.  Universal balked at this, and it was decided that Chaney would continue in the role he originated, as Larry Talbot the Wolf Man, and a new actor would take over as Frankenstein's Monster. 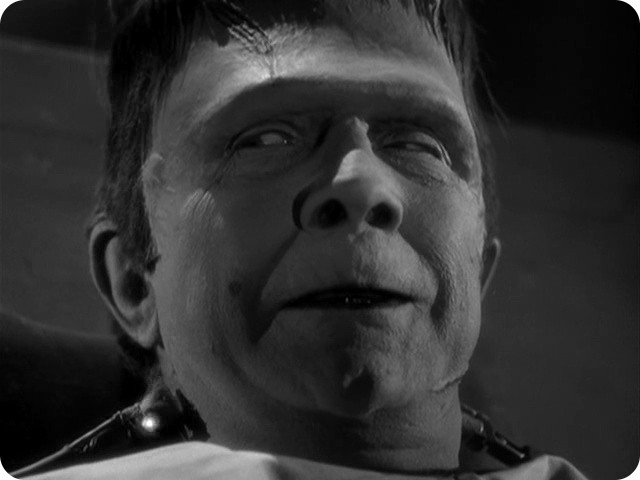 In the previous Frankenstein film, "The Ghost of Frankenstein," the brain of Ygor, the evil graverobber (as portrayed be Bela Lugosi) had been implanted in The Monster.  At that point, The Monster was still physically portrayed by Lon Chaney Jr., but his voice and mannerisms were that of Bela Lugosi.  It was an exciting performance from both actors, and set the stage for a bold new direction in the Frankenstein franchise.  With Lon Chaney Jr. no longer playing The Monster, it made perfect sense to cast Bela Lugosi in the part, especially since he would probably have been voicing the character anyway.  But it turned out to be huge failure.


CONTINUE READING AFTER THE BREAK... 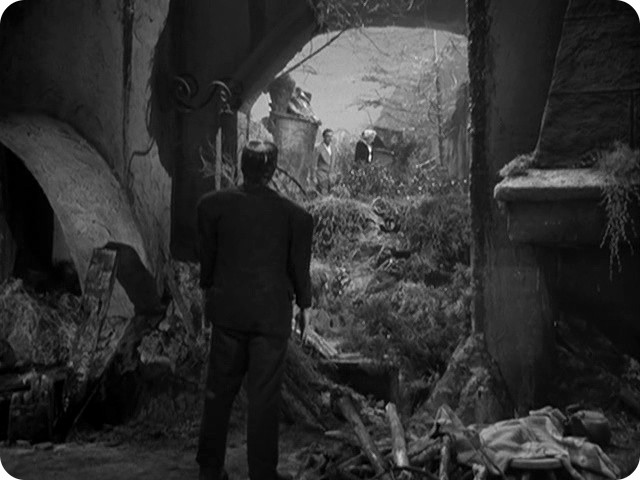 Bela Lugosi was 60 years old at this point, and falling ill, making the heavy Frankenstein prosthetics difficult for him to wear.  Additionally he got sick during the production and missed several weeks of shooting.  As a result, stuntmen were employed heavily to fill in for him, especially during the physical action scenes, and Bela was used primarily for scenes involving dialog and close-ups.  And in the original version of this movie, there was quite a bit of dialog for him to fill, as The Frankenstein Monster seen at the end of "The Ghost of Frankenstein" was quite different from the versions that had been seen before.  This version of The Monster was manipulative, cunning, and evil, and given to spouting megalomaniacal monologues.  He was also blind, due to a complication with the brain transplant.  As a result of his blindness, Lugosi played him fumbling about with his arms outstretched, and this arms outstretched look became permanently associated with The Monster even in later films where he was no longer blind. 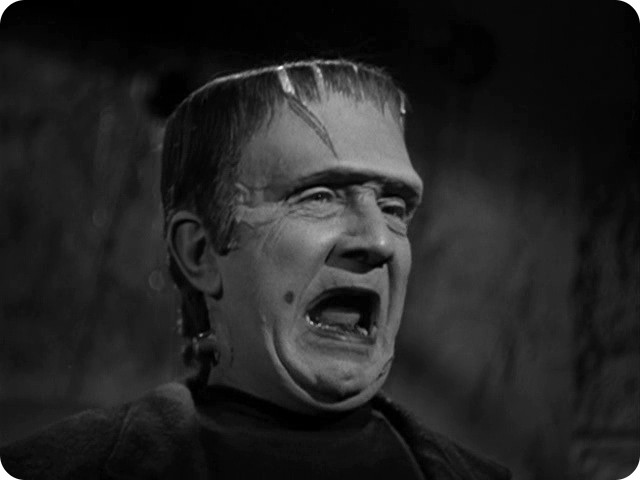 So, the basic plot of this film went something like this:  Four years have passed since Larry Talbot (aka The Wolf Man) has died.  Then, on a full moon, graverobbers enter his crypt, open his casket, and remove the layer of wolf bane that he is covered in, at which point Talbot comes back to life, and transforms again into The Wolf.  Talbot realizes that the werewolf curse has made him immortal, and that he is doomed to spend an eternity transforming into a monster and murdering innocent people.  So he seeks out the one man whose investigations into the secrets of life and death hold promise of ending his own life, and thus his curse.  A man named Frankenstein. 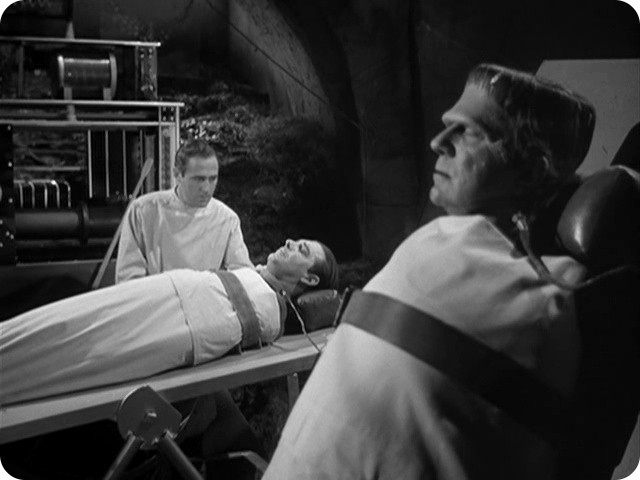 Talbot travels to Frankenstein's home in Vasaria, only to discover his castle is in ruins, and the doctor himself is dead.  But he discovers something else in the castle:  Frankenstein's Monster (who burned to death in the previous film) encased in a block of ice!  Talbot befriends The Monster, and the pair seek out the secret notes of Dr. Frankenstein to heal The Monster and bring death to Talbot.  And I've got to say, the fact that Talbot, essentially the "hero" of this story, is on a quest to commit suicide is a pretty ballsy move by the filmmakers. 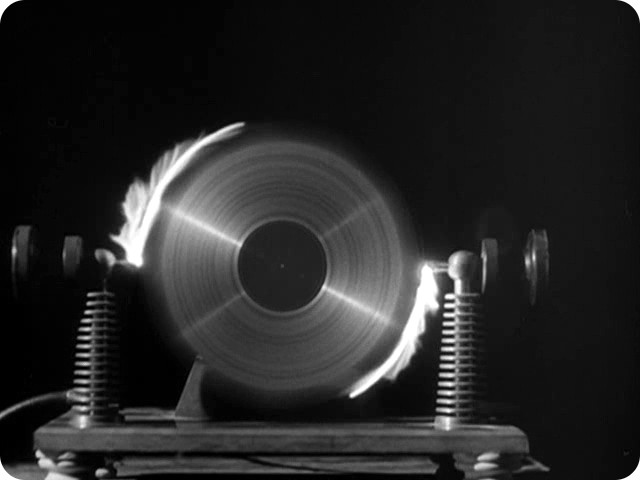 Talbot and The Monster get help in their quest from Ludwig's daughter, Elsa Frankenstein (not to be confused with Ludwig's brother's wife, who is also named Elsa Frankenstein) and Dr Frank Mannering, a doctor who has been tracking the Wolf Man.  Dr. Frank and Elsa plan on helping Talbot to die, but they also secretly plan on destroying The Monster. However, Dr. Frank becomes obsessed with the work of the various Doctors Frankenstein, and instead of killing The Monster, he drains energy from Talbot and implants it into The Monster, making him stronger than ever.  The supercharged evil Monster than knocks out the doctor and attempts to abduct Elsa (presumably to sexually assault her).  Talbot then transforms into The Wolf Man, and the two monsters battle each other, until the locals villagers intervene and blow up a dam, drowning them to death. 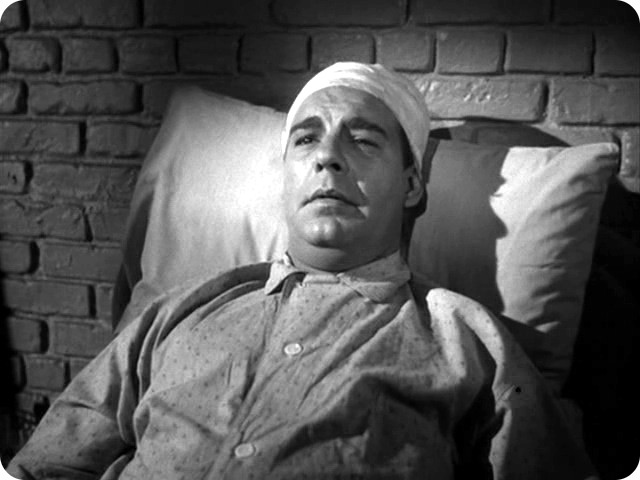 This sounds like it could have been a really good movie, but it wasn't meant to be.  The previous film "The Ghost of Frankenstein" had established The Monster as intelligent and speaking with Bela Lugosi's voice.  But while that worked as a shock ending for that film, the test audiences for this film just could not accept The Monster speaking with Bela Lugosi's accent and Ygor's personality, and in fact found it unintentionally funny rather than frightening.  So the studio ordered all of The Monster's dialogue cut from the film, and even dubbed in a few Boris Karloff style grunts and moans for good measure.  But this ended up cutting most of The Monster's scenes from the movie, and what was left did not make sense.  In the final cut, no mention is made of The Monster being blind, and Dr. Frank is never shown to heal him.  So his outstretched arms, fumbling about body movements come and go with no explanation.  This is made even worse by the heavy use of stunt doubles, who continue to outstretch their arms even after the scenes where The Monster can see.  And no explanation is given for why Dr. Frank becomes obsessed with the work of the Frankensteins and decides to aid The Monster instead of killing him.  Likely these were due to conversations he had with the manipulative Ygor personality of The Monster, who had a knack for getting other men to do his bidding, such as in the previous film when he engineereed to have his brain implanted in The Monster. 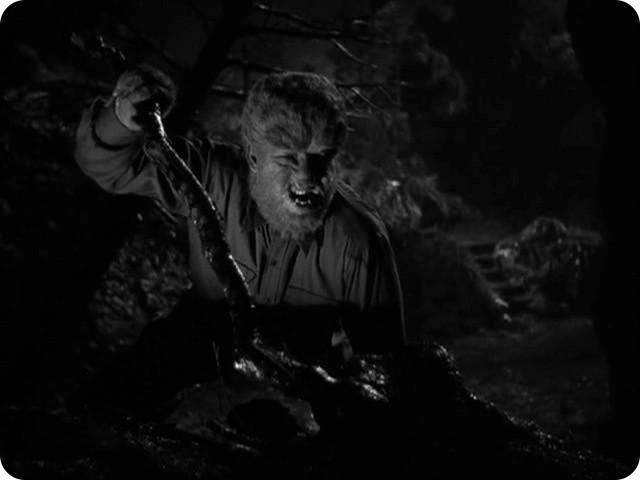 The worst served by cutting all of The Monster's dialog was Lugosi himself.  Since he was already using a lot of stunt doubles, and mostly focusing on the dialog scenes, the majority of his performance was cut from the movie.  In fact, in the final version of the movie, more than half of the screen time of The Monster is actually being played by someone other than Lugosi.  Not understanding this, Lugosi's performance was savaged by the critics, and this film can be seen as beginning a major downward shift in the quality of the roles he received after (although his declining health was also a major factor). 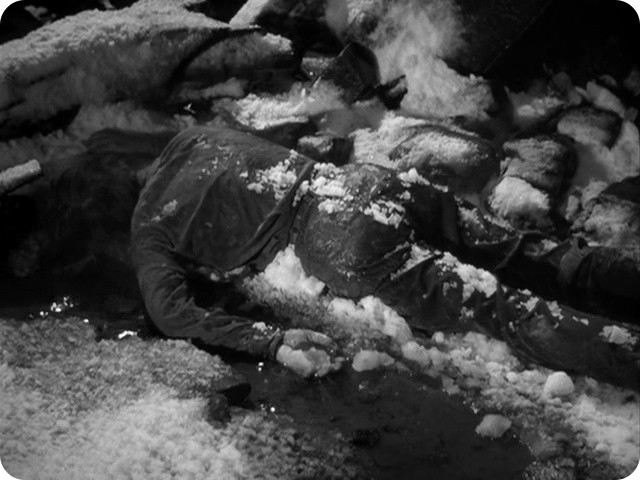 The final version of this film ends up as a bit of a mess, but it's easy to imagine it could have been great if we could have seen the original, uncut version. However despite the failure of the film, the idea of the monster team-up lived on, and Universal followed up with two multi-mosnter sequels, "House of Frankenstein" and "House of Dracula," before the Universal Monster movies declined into the pure excrement that is the Abbot & Costello movies.
Posted by Joshua Raymond at 11:03 AM